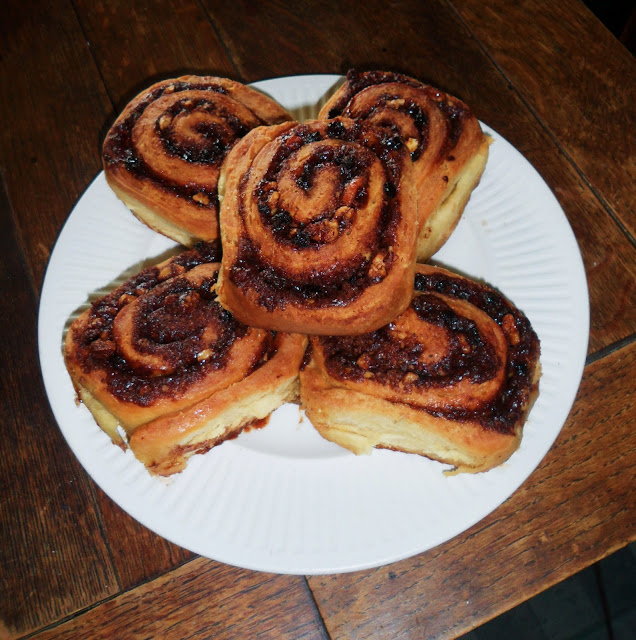 Whether you call them cinnamon rolls, cinnamon buns, sticky buns or anything else, you love them. They are perfect warm out of the oven and make your home smell incredible. They are sweet, sticky, fluffy, pull apart indulgences. If you make these for your friends, family or coworkers they will love you for it. I couldn't decide if I wanted to make cinnamon raisin rolls or cinnamon pecan rolls. Both pair very well with the warm, sweetness of cinnamon. Then I thought, if I used dried currants instead of raisins, I'd be able to incorporate them both without overstuffing the rolls. Currants, to me, taste very similar to raisins, but they're much smaller.  You could do just pecan pieces, or just currant, just raisins, or no extras at all. These are great with just cinnamon and brown sugar in the middle. I haven't tried it, but I bet you could peel and core a couple of apples and chop them into small cubes. That would be amazing.

Call me a heretic, but I am not a big fan of icing on cinnamon buns. I find in most cases it's a little too sweet for my taste. I prefer to eat them as is or with a modest glaze. If you like icing, by all means, use that instead. Cream cheese icing is a popular choice for gooey cinnamon buns. You could also melt butter with a bit of milk in a saucepan and gradually whisk in icing sugar until it reaches the desired consistency for a simple white icing. I found a recipe for a maple glaze that looked good. It caught my attention because it didn't call for any sugar, but mind you it's mostly maple syrup which is high in natural sugars. So I did that, and it was alright but I only had light cream (5%) on hand and the recipe called for heavy (or whipping) cream (approx 35%). My glaze, as a result, was a little too thin. Delicious none the less.

Only the best cinnamon buns are made with yeast, which takes time to rise. From start to finish, these take about four hours to make but very little of it is actual work. You just have to wait for your the yeast to make the dough rise. You can make these whenever you want, but if I may make a recommendation, you could prepare them up to the oven stage and keep them in the fridge overnight. That way most of the work is done and you can pop these in the oven and make the glaze in the morning for breakfast. I can't overstate how amazing this process makes your kitchen smell (and it lingers for hours). What a great way to start the day.

We'll start with the dough part of the recipe. Melt the butter in a saucepan and add the milk, brown sugar, vanilla and salt over low heat. You want it very warm but not simmering. It should be just warm enough to stick your pinky finger in without discomfort.  If it's too hot, it will kill the yeast, but if it's not warm enough the yeast will not activate. 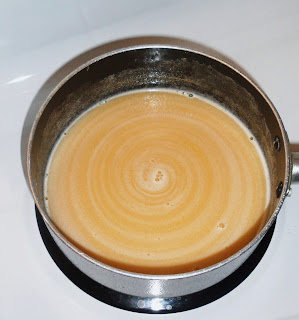 In a large bowl, combine half of the flour and the yeast. Whisk to combine and loosen. Add the warm butter liquid and mix with a wooden spoon. Then add the eggs, and  the remaining flour in three equal parts, mixing between each. This is to ensure that everything gets combined evenly. 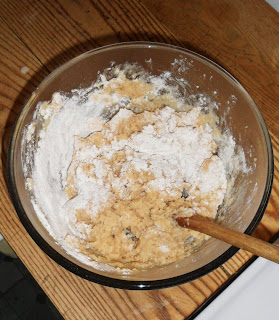 When the dough gets too annoying to stir with a spoon, pile it onto a floured surface and knead it with the palm of your hands. 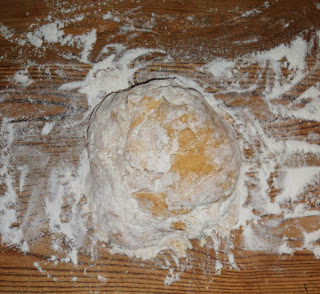 Just fold the dough over itself for about eight minutes or until the dough is very smooth and elastic.. It will look something like this... 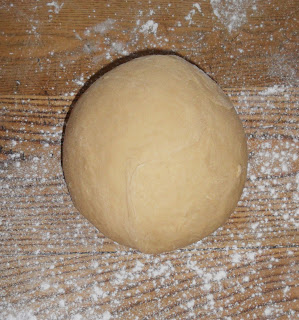 Lightly oil a large bowl and place the dough inside. Roll the ball around so that it too becomes lightly oiled. Place a damp tea towel over the bowl and keep in a warm place with no draft to let it rise. Your oven, not turned on of course, or a microwave is a great spot. The dough will take anywhere from one to two hours to double in size. Mine took about 90 minutes. In the meantime, you can make the cinnamon filling. 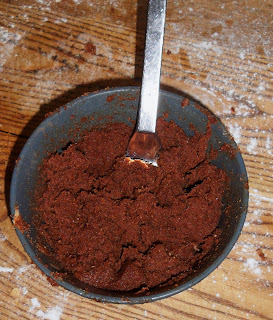 This is by far the easiest part of the recipe. Just place the softened stick of butter, brown sugar and cinnamon in a bowl and cream together. That just means mash with a fork and then stir into an evenly combined paste. Ta dah! 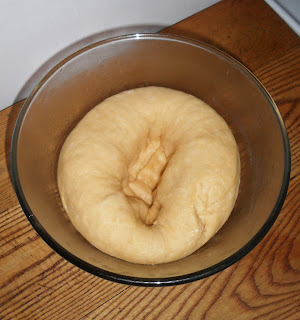 When your dough has doubled in size, punch down the center of it and it let it rest again for a few minutes. 3-4 is plenty. Then turn it out onto a lightly floured surface and roll it with a rolling pin. Make a rectangular shape (which clearly does not have to be perfect), about 8x12 inches (45x30 cm) with the long side facing you. 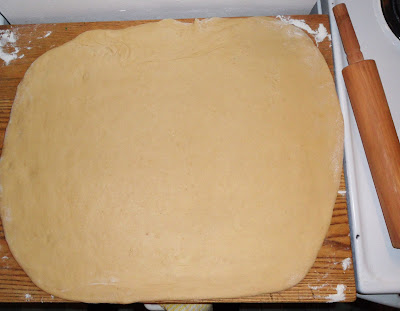 Take your cinnamon mixture and spread it evenly over the dough with a spatula. Leave about an inch or so around the perimeter uncovered. That will help the dough to stay in place once it's rolled. Then, from a height, scatter the pecan pieces and currants over the cinnamon and sugar, doing your best to ensure an even distribution. 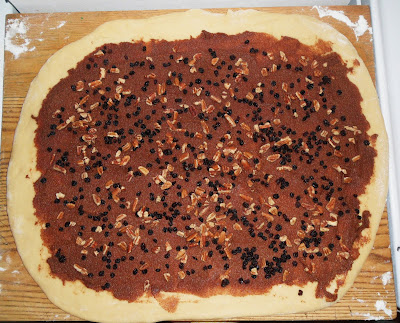 Brush a little melted butter on the uncovered perimeter of the dough. You won't need any more than a tablespoon for that. Then roll the dough up, starting from the long end closest to you. Roll the dough tightly and take your time to ensure that no pockets of air are trapped. 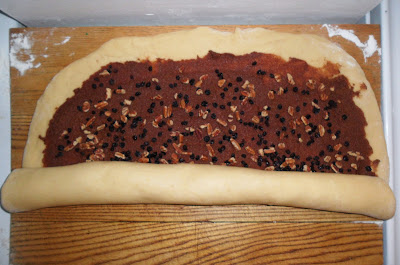 Once you have a large, cigar shaped log, pinch all along the seam to seal it. 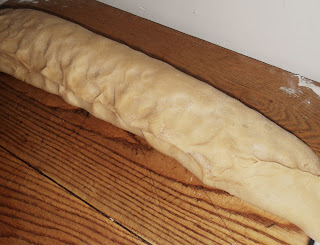 Using a sharp, serrated knife cut the log into one inch slices. You may choose to discard the end pieces as they tend to be skimpy on the filling. You will end up with about 12-15 rolls. 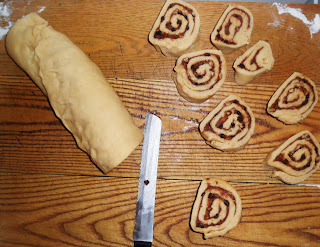 Arrange the rolls, cut side down, on a lightly oiled baking tray. Leave a little space between them as they will continue to grow a bit and grow again in the oven. Leave them to rise, uncovered, for another hour or two. 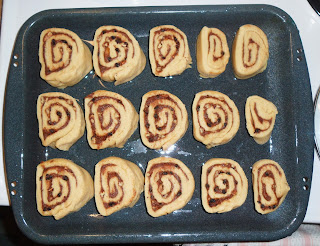 Once they've risen again,  you can either bake them right away or keep them in your fridge to bake in the morning for breakfast. Whenever you do decide to bake them, preheat your oven to 350F/177C. 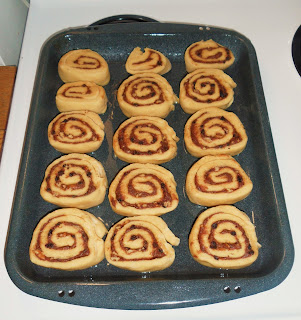 Before putting them in the oven, brush them evenly with a little melted butter. This will ensure that the tops turn a nice golden brown. In total, you won't need more than a 1/4 cup of melted butter for this step. 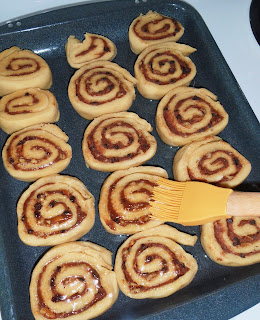 Place in your preheated oven and let them cook for 40-45 minutes. While they're baking and smelling amazing, get on with your glaze...


Melt the butter in a small saucepan over low heat. When the butter is melted, add the maple syrup, cream and salt. Whisk to combine and bring the heat up to medium-high. Heat until it comes to a hard boil and let it cook and reduce for 1 minute. Then remove from the heat and set aside. 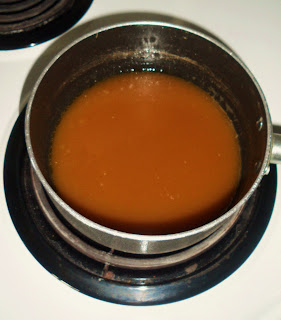 When your cinnamon rolls are done, remove them from the oven and awe at their sweet scented glory. 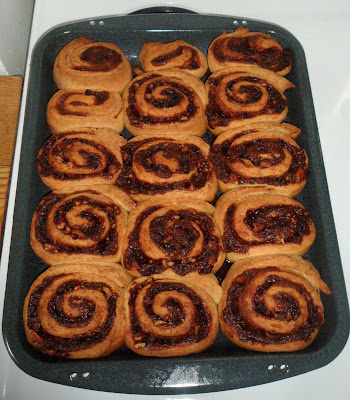 Take your glaze and pour it evenly over the cinnamon rolls while they are still warm. If needed, use a brush to even out the glaze so that everything is covered before it sets. 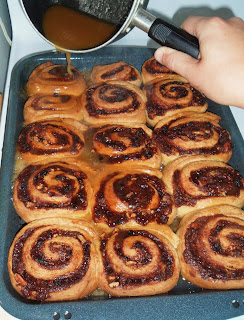 Once the buns are cool enough to handle, serve immediately. Nothing beats a warm, homemade cinnamon roll! 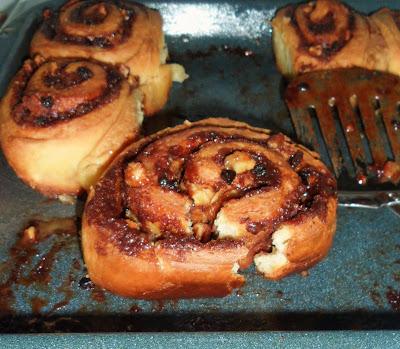 There you have it! Pretty easy, right? So as I mentioned before, it takes some time but most of it is effortless waiting. They are best warm but once they are cooled you can keep them in an airtight container and they will keep for 2-3 days (if they last that long).

Let me know how these turn out and any personal tweaks you may have made to suit your taste. I love to hear your feedback. While we're on the topic, don't be shy if you have any questions or recipe requests.

Take care everybody and much love to you and yours,

B
Posted by BramLlewellyn at 12:32