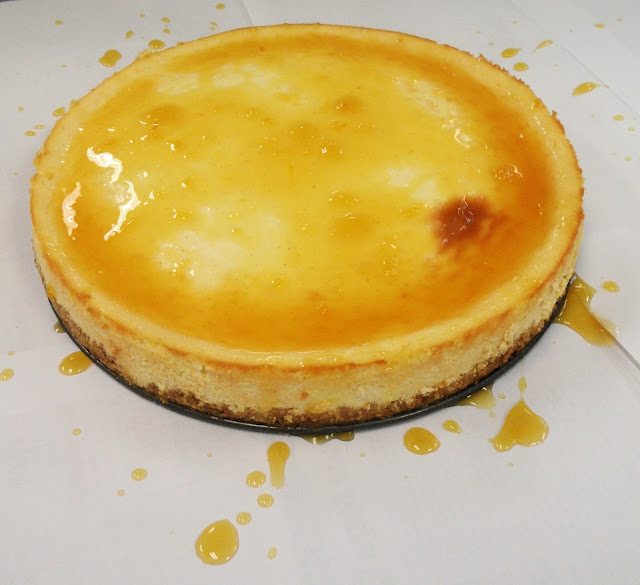 It's the blog's very first cheesecake! When I was a kid I used to love cheesecake. It was probably my favourite. My tastes have changed since those days. Don't get me wrong, a good cheesecake is a good cheesecake. I just don't have the same sweet tooth that I once did. So while something like this is a rare treat for me, it does make a great occasional indulgence.

That being said, this recipe was a little experimental. I fine-tuned it more to my taste than possibly the general public. An example of this would be the sugar content. For the amount of dairy in this recipe, most cheesecakes will call for 1 cup of sugar (or even 1.5). I don't particularly care for things that are too sweet. I used about 3/4 cup of sugar, maybe a little more. That was about perfect for me. The best thing to do is give your batter a little taste and adjust before you pour it over your crust. "But Bram!! There's raw egg in that batter!". True, but there is raw eggs in a lot of things (mayonnaise, aioli, meringue, tiramisu, mousse, etc..). Most of those examples that are sold commercially are used with slightly pasteurized eggs. Just live a little. If you use fresh, perky eggs then you'll be fine. I also used plain yogurt instead of sour cream. Yogurt is a lot healthier for you and it does the job. It doesn't have quite the same tangy flavour as sour cream but the lemon and orange bring their own acidic flavour anyway.

I had originally planned on an orange and lemon compote (chunky and jammy) for the top of the cheesecake but it did not work out at all. Oranges are very pulpy and fibrous. I thought by cutting them into supremes (as seen below), I would eliminate that texture by removing most of the pith. To make supremes, the segments of a citrus fruit and carved out with a knife leaving most of the skin behind.  It just turned really mushy and unappetizing. So instead I put the hot fruit mixture in a colander and squeezed out all the liquid. Then I added a little more water and sugar as needed and reduced it over heat into a light fruit syrup (or coulis). I'm happy to say that it actually worked out really well. I got the flavour and colour that I wanted, I just had to settle on the texture. I'll share more or less what I did but bear in mind you can do whatever you want instead. You could eat it with warm marmalade, fresh fruit, whipped cream, no topping at all, whatever...

This is only the second cheesecake I've ever made. There are many different methods of  making cheesecake (water bath, left in oven with door closed, left in oven with door open, etc...) some of which take hours. So far I've been lucky. I haven't had a cheesecake fall or crack on me yet. All I do is bake it on the middle rack at 350F/177C until the sides of the cheesecake are set and the middle is still a little wiggly, but not liquid. That takes about an hour and fifteen or twenty minutes. I also poured boiling water from a kettle into a casserole dish and placed it on the bottom rack. The cheesecake doesn't have to sit directly in the water. It's just to make a little steam in the oven so nothing dries out.  If you always follow your own cooking method, far be it from me to try to change your mind.

Get started with your crust. You will want enough gingersnaps to make up 2 cups worth of crumbs. I used about 25 cookies to achieve this but trust your eyes. Before you do that, eat one of the cookies (just one, lol). All you need to make the crust is pulverized cookies and melted butter. The flavour of your crust relies mostly on the cookies. If you like how they taste then you're good to go. I added just a little salt and about a teaspoon of ground ginger. The best way to ensure that any dish you prepare will taste good is to taste every element yourself while you prepare it and adjust if necessary. Just be sure to use clean utensils every time.

Place the gingersnap cookies in a sealed bag and bash them with a rolling pin (or anything that will do the job) until the cookies are finely ground into crumbs. Place in a bowl and pour in the melted butter. Mix together until the butter is incorporated and it becomes the texture of wet sand. 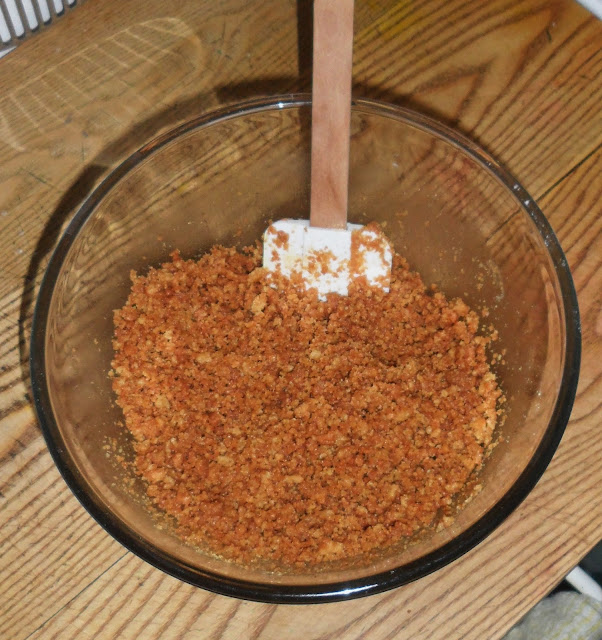 Lightly grease a springform pan and pour the gingersnap mixture into the base. Press the mixture into an even layer over the pan. You can use clean hands or the bottom of a glass or ramekin. 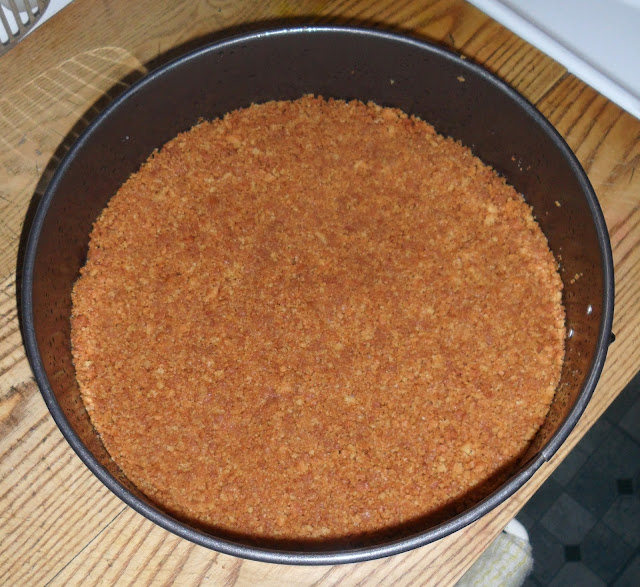 Place the pan in your freezer to allow it to set. By the time the filling is ready you can take it out.


For the filling, combine the cream cheese, yogurt, and sugar and mix well. You could even do this part in a food processor. If you have a stand mixer or an electric mixer that would be ideal. I'm at a point where I have neither so I got a bit of an arm workout. lol. Having your cream cheese at room temperature is imperative or else this step will take you an eternity.


Then beat in the eggs one at a time. Roll the vanilla bean against a hard surface and lay it flat. Slice the vanilla bean with a pairing knife all the way down the middle, lengthwise. Open the bean and run the back of the knife across it to remove as many of the tiny black seeds as possible. When the eggs are incorporated, add the vanilla seeds to the mixture. Then add the lemon zest, orange zest, lemon juice, orange extract and salt. Mix well. 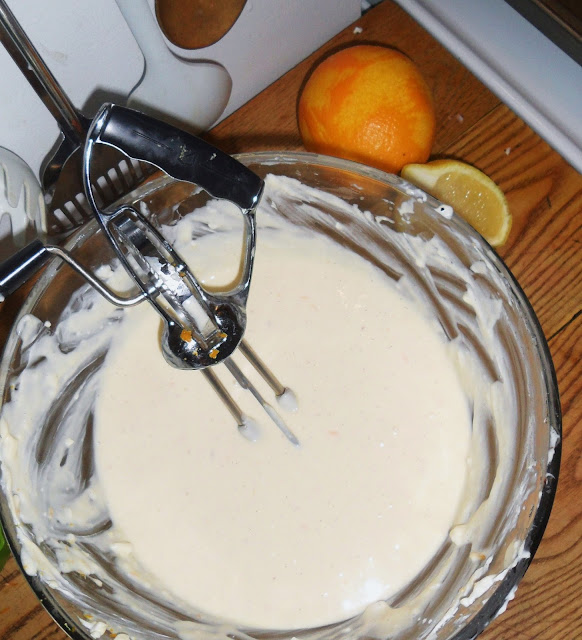 Remove the springform pan from the freezer and pour the cheesecake filling over the crust. When the filling has settled evenly, give the pan a few gentle shakes and a few light taps to force out any possible air bubbles. I usually wrap the bottom of my pan with aluminum foil in case of any leaks or spills, but it's up to you. 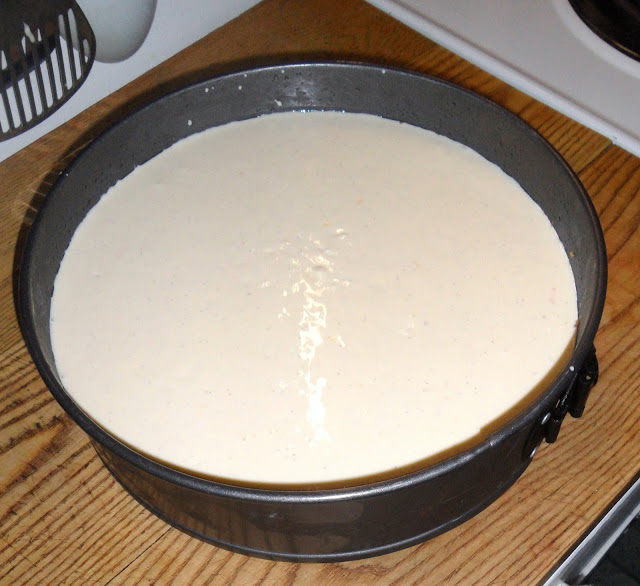 Pour boiling water from a kettle into a large casserole dish. Carefully place the dish on the bottom rack of your oven. Place the cheesecake in the middle of the oven above the steaming water. Close the door and bake until the sides are set and the middle is still a little wobbly (approx 1 hour and 15 minutes). 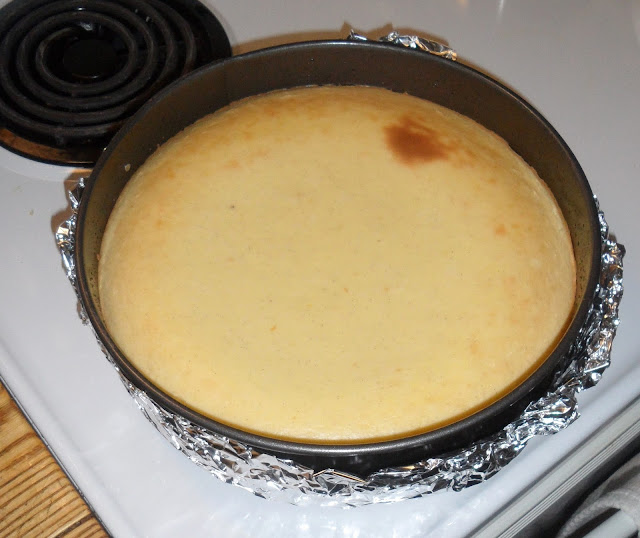 Remove the cheesecake from the oven and allow it to cool. A bit of browning may have occurred, but don't worry about it, If you opt for fruit or a thick topping you can cover it up anyway. Mine ended up with one brown spot to the side. Which was kinda cool because it somewhat resembled a navel orange after I put the coulis over it, and I used navel oranges to make it. Maybe that's just my imagination.

So here is the important part, you need to let the cheesecake sit for at least a couple of hours or until it cools down completely to room temperature. If you put it in the fridge while it's too hot, it could spoil, crack and/or collapse. When your cooled cheesecake is in the fridge, leave it for at least six hours or preferably overnight. The cheesecake still needs to set slowly and adhere to the crust. It is best served cold.

Alright, so let's get into the coulis. As I mentioned, I tried to make a compote that didn't work so i turned it into a coulis. In a small saucepan, I combined supremed oranges, zest, lemon juice, sugar and ground ginger. Then I brought that up to medium heat while stirring. 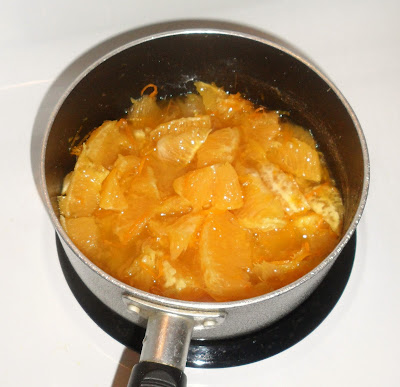 I brought that up to a simmer but after a while it started to look like this... ew. 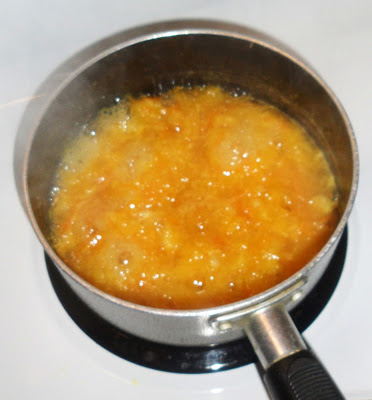 I placed a colander over a bowl and poured the contents of the saucepan into the colander. Using a rubber spatula, I pushed down on the mixture to extract as much liquid as possible. Then I poured the liquid back into the saucepan and brought it up to a boil. I played around with it, adding sugar a bit of sugar and water as required. After a few minutes the sugar in the water began to caramelize and added a great colour to the coulis. Keep in mind that when the liquid cools it will become much thicker. So you still want it slightly watery when you take it off the hob. When it's cool enough to taste, adjust with sugar or water if necessary. If it's really to sweet, then you might want to add enough water to double or triple it in volume and return it to the heat to thicken up again.  This is optional, but after I removed it from the heat I added 3-4 drops of orange blossom water, just for fragrance. 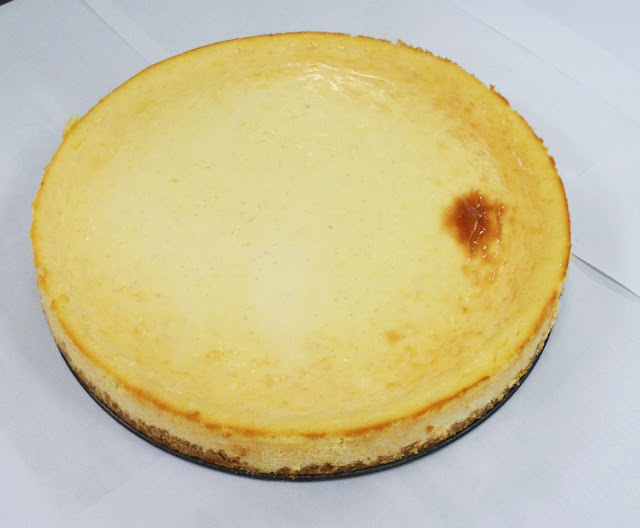 Before you release the cheesecake from the springform pan, run a butter knife gently around the outside to separate the sides from the pan. Then unhinge the sides of the pan and reveal. I let my cheesecake sit overnight in the fridge and brought it to the office the next day for everyone to try. 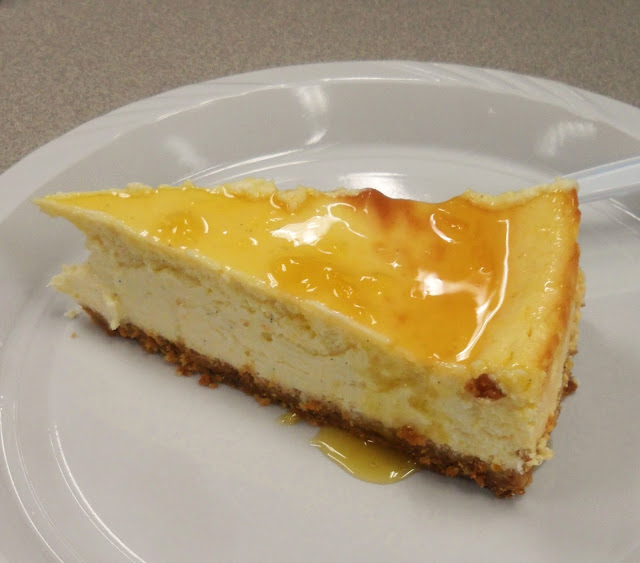 I spooned the coulis all over the cheesecake before slicing into it. Everyone seemed to like it very much. It was rich, but not too sweet. Creamy but brightened up by the lemon, orange and ginger. It was a really terrific flavour profile. I love desserts where you can see the little flecks of vanilla bean seeds throughout it. It just screams quality.

Give this recipe a try and as always, tweak it to your liking. Don't be discouraged if your cheesecake falls or cracks a bit. It's more common than you might think. If it happens, just cover the top with a thick sauce and/or fresh fruit and it will be stunning.

I hope you enjoyed! See you soon,

Blogger's Tip: Vanilla beans can be expensive so you want to get the absolute most out of them. There is still some flavour locked away in the vanilla bean even after you've scraped it. Add some sugar to a sealed container and add the vanilla bean to it. Give the container a good shake and leave it for a couple of weeks. Now you have vanilla sugar!
Posted by BramLlewellyn at 14:42