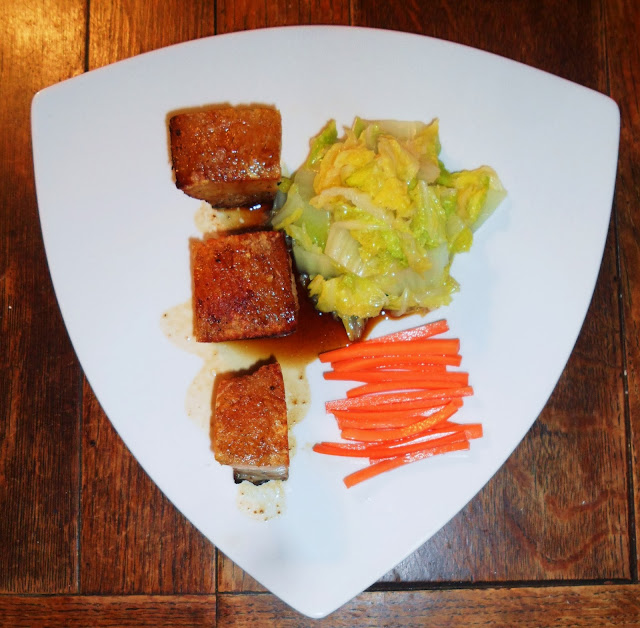 Hello again everyone. I'd like to share what I made for dinner tonight. Before I go any further, I'd like to remind everyone that I'm an amateur home cook, not a professionally trained chef. That being said, I have no problem admitting when I've made mistakes in hopes that you can learn from them. I'm going to share the recipe and technique that I used but I don't believe in my heart that I really pulled this one off. One issue is the sauce. I did not reduce it enough and it turned out too thin (not the first time this has happened, I'm afraid). That part I am certain of. The other disappointment I had was in the meat itself. I'm not sure if this was an error on my part, the particular cut of pork belly I had or if this is in fact how pork belly is, but I found it to be overbearingly fatty. I'm confident that I have since figured out a major factor in the downfall, but more on that in a bit.

As the name suggests, pork belly is a slab of the belly of a pig. Most commonly (in the western world, anyway) this cut is cured and sliced into several rashers... making bacon. Pork belly on its own is not cured and sold as is to be either roasted or braised. It is a tough cut of meat that requires some time and attention. While I've eaten bacon before, I had never eaten pork belly like this. I knew going in that it was going to be a fatty cut. I underestimated just how fatty it was. Some pieces that I ended up with were at least 50% fat! Luckily, through braising the edible meat became so melt-in-your-mouth tender that it easily pulled away from the fat. I was able to remove most of the fat but it just ended up waste in my green bin (you might call it a compost).

I would really love some feedback from anyone who is familiar with pork belly. Maybe I didn't prepare it right. Maybe this is something to just be expected from this cut of pork. I'm not sure but I intend to get to the bottom of this. There was a thick layer of fat just beneath the skin. I know of a way to remove that while keeping the skin in tact. I still found there to be a lot of fat running through the meat anyway so the technique would not have taken me far enough. It's a bit of a shame. I'm hoping to get this right and do a similar version in the future for you guys.

The edible meat was stupendous and I got the skin (or "crackling") very crispy which was a real treat. The two side dishes I made also turned out very well. I thought there were enough positive attributes about this dish to share it but I wanted to point out my concerns first. I appreciate your understanding.

Since there are three parts to this dish, we will look at each one individually. You're going to need to prepare the pork belly a day in advance so you might as well make the pickled carrots in advance too. You could get away with leaving them to pickle for one hour but at least overnight would be preferred. I used sugar for the carrots and the sauce for the pork but I managed to find some palm sugar. Palm sugar is derived from the sap of coconut palms. It is better for you than common refined sugar and it also imparts a certain flavour that works really well in Asian dishes. I understand if you can't find it. Regular sugar will work just fine in its place. If you can manage it, I recommend white sugar for the pickle and brown sugar for the pork sauce, but it's up to you. Palm sugar is brownish in colour, FYI.

1 cup of carrots, cut into matchsticks (you could get away with a little over a cup)
1 cup rice vinegar (or distilled white vinegar)
1 cup water
1/4 cup palm sugar
1 tsp salt

Combine all the ingredients in a clean jar or similar container (carrots must be completely submerged) and leave in the fridge for at least one hour. It will last for weeks and get better with time. Be sure to drain well before serving. 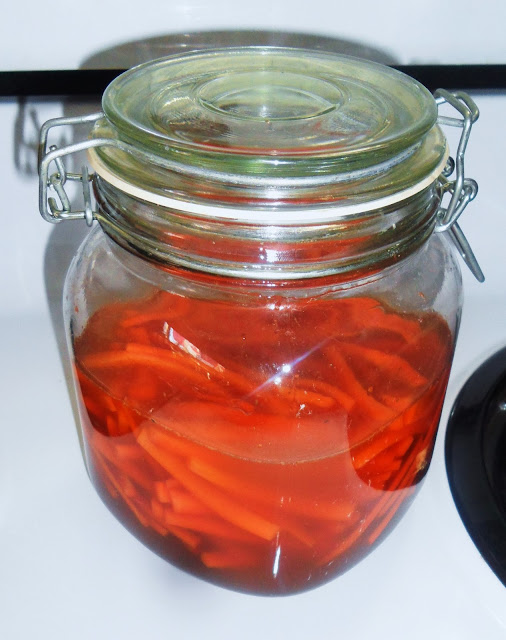 First of all, this is what a Napa cabbage looks like: 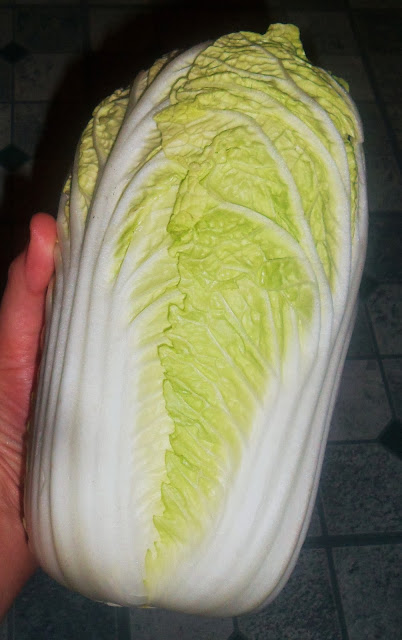 If you can't find it where you normally buy groceries, a specialty Asian market will be more likely to have them. If not, just use savoy cabbage or bok choy for this recipe. Napa cabbage has layer upon layer of leaves and each one is likely to have a little dirt (maybe a few harmless bugs too). It's very important to wash them thoroughly. I chop it first and then wash it thoroughly in cold water in a strainer before drying it off in my salad spinner. An inspection for cleanliness before using is recommended.

In a large pot (with a lid) warm the cooking oil over medium-high heat and sautée the ginger and garlic for a couple of minutes. 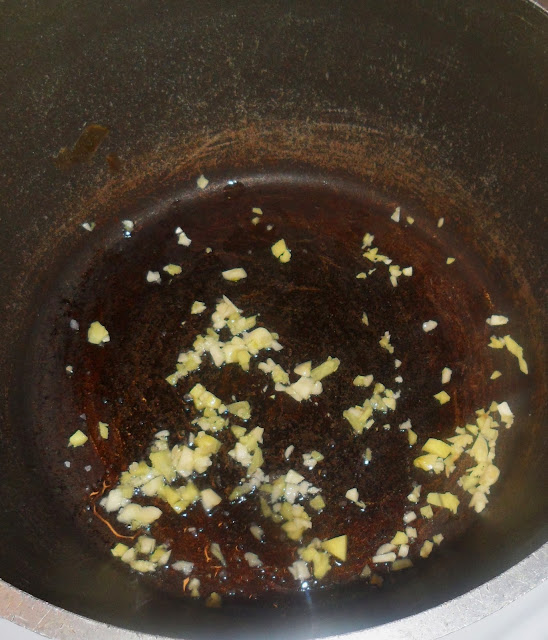 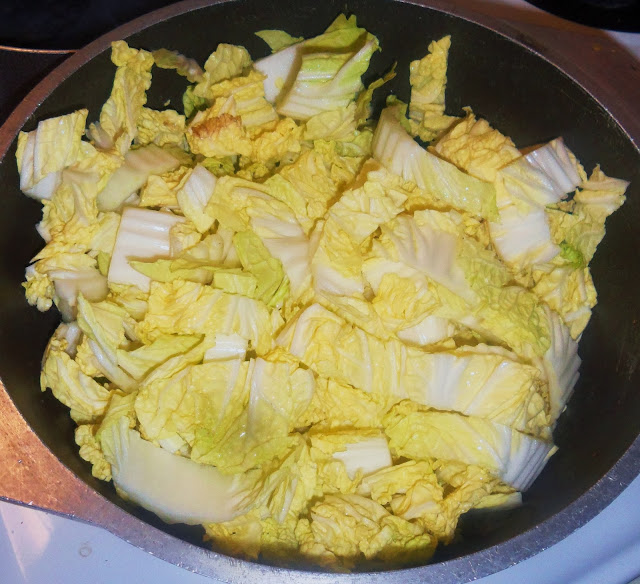 Place the lid on the pot and allow it to steam for five minutes. Once or twice, if you like, you can give the pot a little shake circulate the contents. if you prefer, you can choose to steam the cabbage for up to 10 minutes. 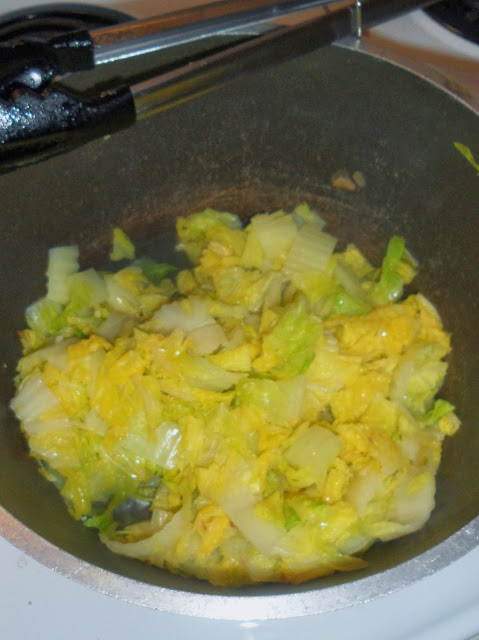 Add the sesame oil and taste for seasoning, adjust if necessary. Drain and plate immediately.

Let's take a quick look at what a slab of pork belly looks like. Below you will find the skin side (or rind): 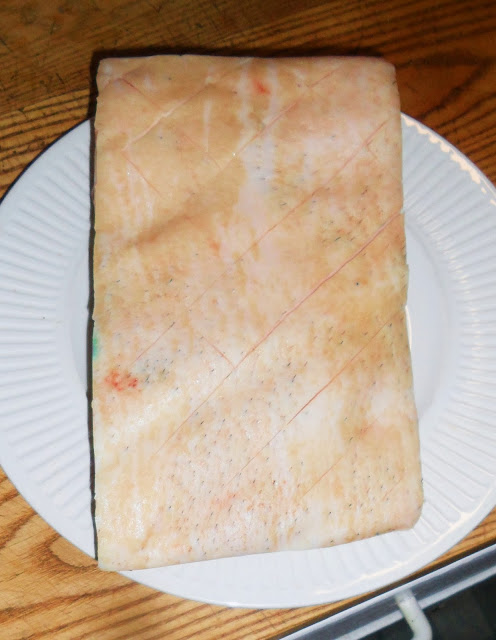 Below is the flipside. As you can see, it's just like a slab of uncured, unsliced bacon: 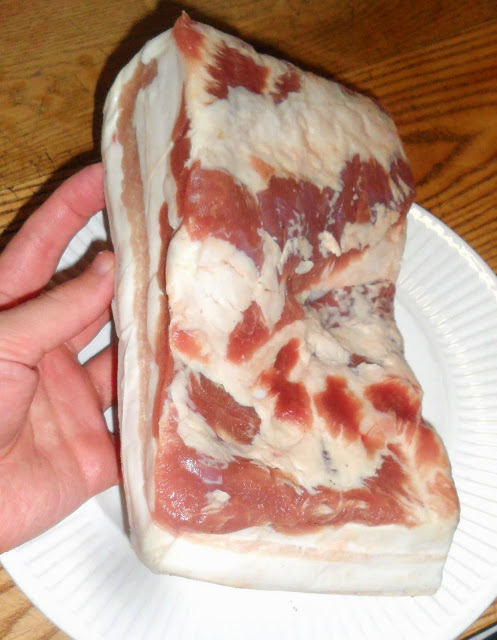 There is a rude amount of fat on this pork belly. I have yet to learn entirely about this cut of meat.

When I bought this from my butcher shop, the skin had already been scored in a cross hatch pattern. You can ask your butcher to do that or just make shallow incisions yourself with a sharp knife. Generously salt the skin side, ensuring that some salt ends up in the nooks and crannies of the incisions. This will assist in a crispy skin when we sear it.

Flip the belly over to meat side. With a mortar and pestle, grind all of the belly rub ingredients into a fine paste. Massage the rub into the meat side of the belly. When finished, place in a plastic bag then leave to marinate overnight in the fridge. 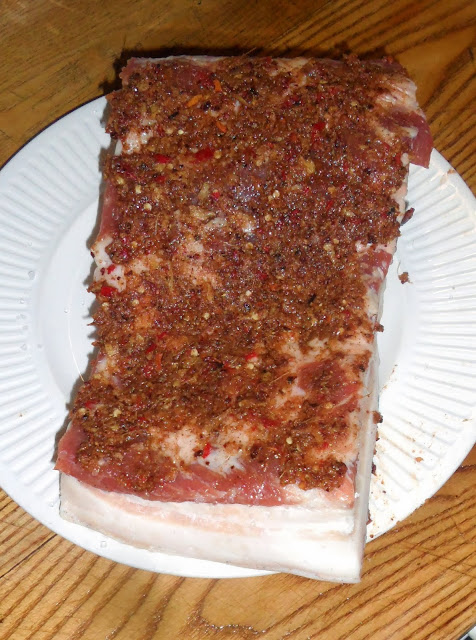 The next day, preheat your oven to 350 F/175 C. Sear the skin side of the pork belly in a pan. Which brings me to my first mistake. I added a little oil and seared the skin at a relatively high heat for about five minutes. I achieved a crispy crackling, but the thick layer of fat just underneath the skin remained. What I suggest, is warm a pan on medium-low and let that layer of fat slowly melt away. As soon as enough fat accumulates that you can spoon it out, do so. This will take longer but will get rid of so much fat while still making the skin crispy. Luckily, we have already gone over this method with duck breast before. If you're unclear what I mean, I recommend checking this link for reference (there are pictures). When fat ceases to melt in spoonable amounts, then you are done this step. 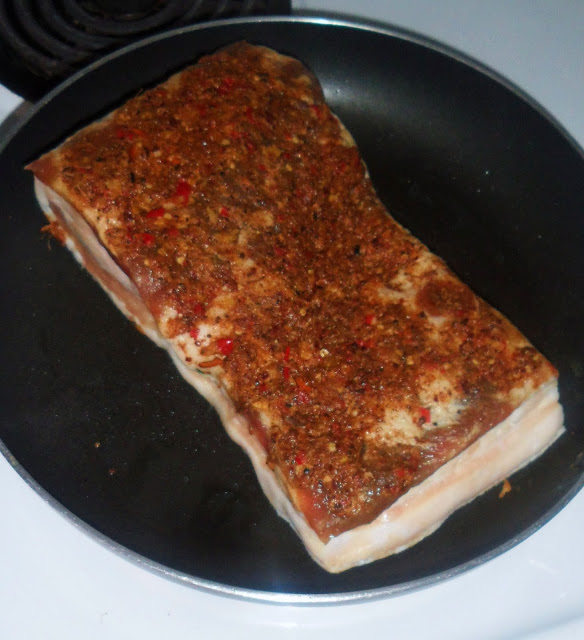 When the skin side is adequately seared, place it in a roasting tray with all of the non liquid ingredients for the belly sauce (but not the palm sugar). When everything is in its place, add the soy sauce, vinegar and enough hot water from a kettle to come up half way up the side of the roasting tray. It does not need to be boiling water but it should at least steam. If you put in cold water your oven will have to work harder to get it up to temperature and it won't cook well enough in time. Cover the baking tray with aluminum foil and place in your preheated oven. Let it cook for 2.5 hours.

When you remove the tray from the oven, carefully remove the foil (beware of steam). At this point, the pork should be at a soft, melt-in-your-mouth texture. Be careful as not to let it fall apart when removing it. At this point, the steam will have robbed the skin of its crispiness. You might be wondering what the point of searing it in the first place was for. Searing not only adds flavour but does keep the skin firmer and will assist in keeping the belly together and from falling apart when you move and slice it. Of course, if you do the slow fat-melting method that also will have helped to rid much of the fat. 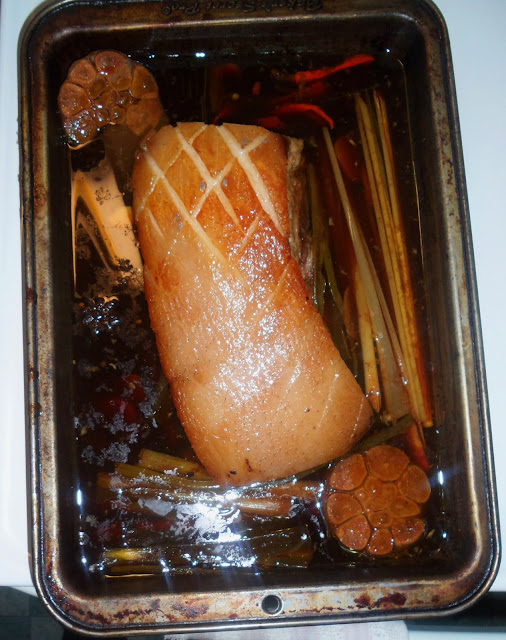 During the braising process more fat will have released into the liquid turning it into a stock of sorts. Carefully remove the pork belly and set aside. Then strain the liquid into another pan, discarding the solids. 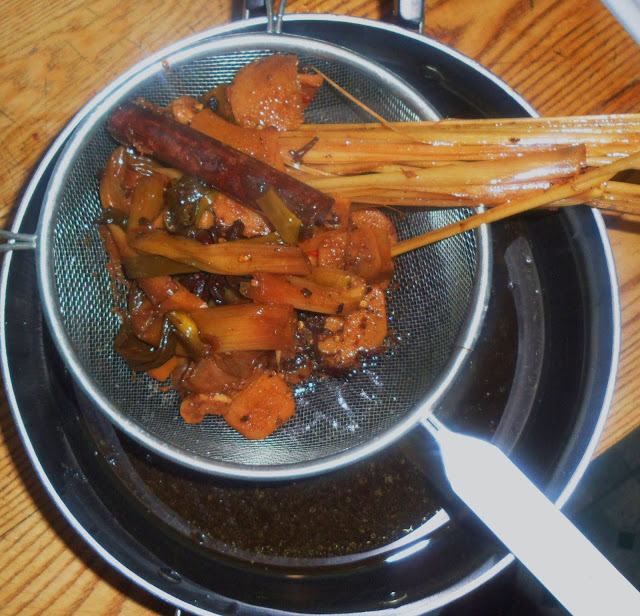 Heat the remaining liquid and keep it at a simmer. Skim off any fat or impurities (in my unfortunate case there was a lot) that rises to the top. At this point, add the 1/2 cup of palm sugar and stir until incorporated. I only reduced my sauce to about half. I would recommend reducing it to about 20% its original volume. That way the sauce will be thick, almost gooey and inviting rather than watery and run all over your plate like it did mine.


Meanwhile, slice the pork belly into desired portions. Heat 1 tbsp of neutral cooking oil over medium-high and place the pieces of belly skin side down in the pan. This sear will bring all the crispiness back to the skin. Lightly sear the remaining sides of thee pork. This will create a crispy texture all over and entrap that melt-in-your-mouth texture I mentioned earlier. 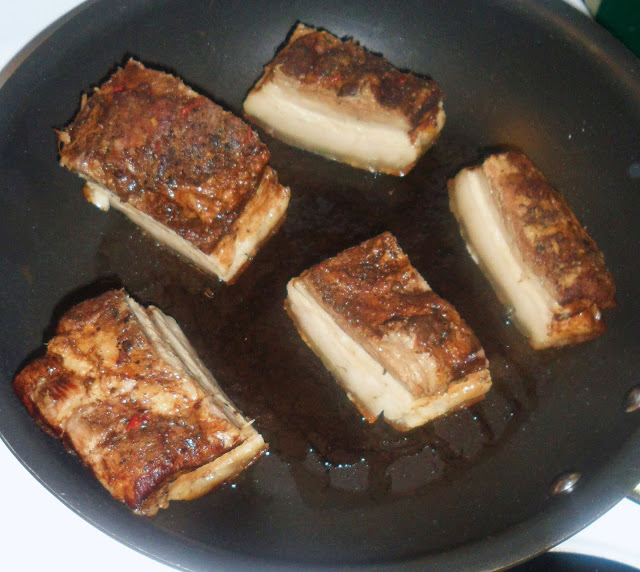 Serve the pork with the sauce, cabbage and pickle as you wish. It is such a shame that my inexperience prevented what could have been one of the best recipes on the entire blog. I hope you can learn from my mistakes and do a much better job yourself. I am so thankful that I was just experimenting with this on my own instead of entertaining guests. That would have been embarrassing.

While the duck breast method will have removed a lot of fat there would still be a considerable amount left in the meat. I still have some research to do. As I mentioned in the opening, the texture of the edible portion was so velvety soft and easily pulled away from the fat anyway. I hope I did not discourage you from trying this. I have faith that with confidence you will do a much better job than I did tonight. Eventually i will try this technique again and make it much better.

The good parts of this dish were so good that I had to share this post anyway. The crackling and the meat of the pork was the best thing I'd eaten in a long time. The carrots were absolutely phenomenal! The bright acidity worked so well with the richness of the pork. The gingery/garlicky cabbage added colour and was the glue that rounded the entire dish together. This dish has so much potential if done properly. You know what though, I am not upset. If it were not for mistakes like these (in no matter what we do) we would never learn, grow and get better. Tonight, believe it or not, I became a better cook than I was yesterday because of this experience. That is the attitude to have my friends.

I wish you luck in trying this yourself (and I do encourage you to, with my corrections). Much love and respect.

B
Posted by BramLlewellyn at 21:32