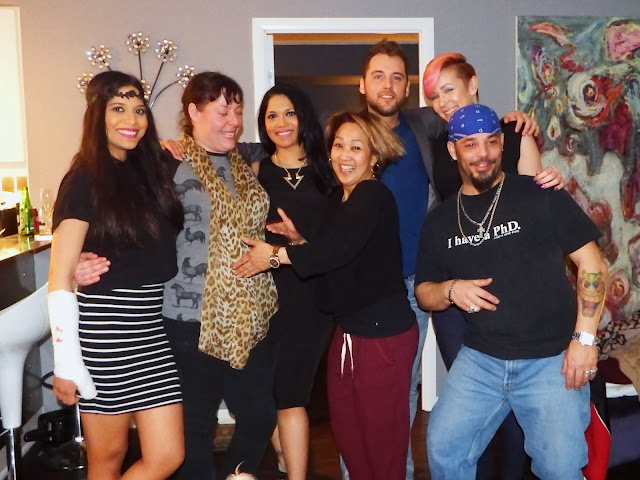 I got together with a few of my fellow MasterChef Canada competitors last night to watch this week's episode (airs every Monday night on CTV). Of the top 50 best home cooks in Canada, seven of us were there. In the photo above (from left) there is Narida Mohammed, Dora Cote, Marida Mohammed, Mylene Facchini, myself, Brooke Feldman and Danny Raposo. Dora flew in earlier that day from Calgary. It was a total surprise! I had not seen Dora since we were on set together. It was awesome to see her. We ate some tremendous food. Brooke and the twins made shrimp and pork dumplings (with five different sauces), crispy pork belly, chicken wings, chicken and pigeon pea curry, rice, cucumber and mango chutney. Everything was stupendous. Thanks, ladies! The dumplings and the curry in particular were my favourite. For dessert we had a sweet, Portuguese style doughnut made by Danny which was scrumptious.

In this week's episode, the remaining eleven home cooks had a mystery box challenge. Instead of random ingredients, they were presented with framed photos of themselves as children. They were given some options for creativity and each created a dish inspired from their childhood. The top three dishes in the challenge were Pino's veal scallopini with gnocchi and mashed peas, Marida's curry shrimp and roti and Eric's char siu tong mein, barbecue pork with soup noodles. Eric was named the winner. His prize was not only being safe from elimination and exemption from the next challenge, but he got to assign the remaining contestants a protein that they would have to build a dish around. Each protein was a specific cut or part of an Alberta cow. With the nose-to-tail theme, the items ranged from flank steak, tomahawk steak and liver to things like brain, tongue and sweetbreads.

The top dishes went to Pino for his Jamaican style oxtail with rice and beans (reminds me of something) and Kaila's fried calf brain nuggets with grilled polenta. They will both be team leaders in next episode's team challenge. The bottom three dishes belonged to Dale for his tomahawk steak, Mike for his liver dish and Dora for her beef cheek stew. In the end, it was Dora who was eliminated from the competition.

It was sentimental to say the least to be with Dora and support her while we watched this episode. Dora was a beloved personality on the show and has garnered quite the following of fans. How she is portrayed on television is very true to her actual self. When it comes to competition and getting something done Dora is a tough, no-nonsense fighter but she also has a fun-loving and vulnerable side. Wishing her all of the best in her future for herself and her family. It was great to see you last night, Babe!

Well, MasterChef Canada has come down to its first top ten ever...

I want to say a big congratulations to all of them! Maybe, with any luck, Michael Bonacini's recommendation to me to come back next year will usher a spot for me in the top ten of season 2. Time will tell. Wish me luck!
I already have a couple of projects in store for the blog. Stay tuned and keep cooking...
B
Posted by BramLlewellyn at 17:59