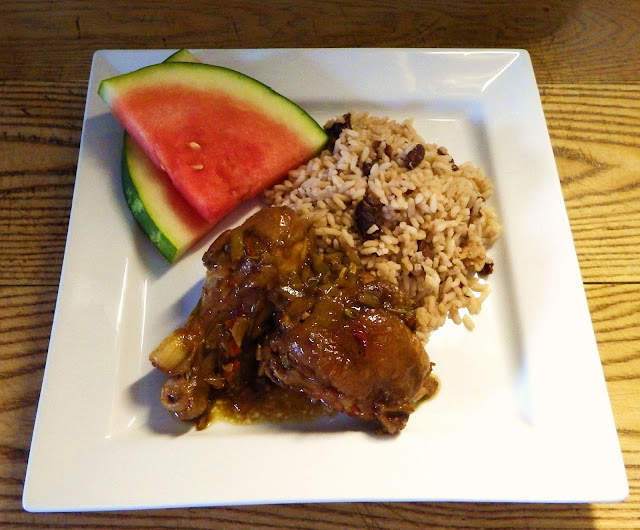 A popular Caribbean dish is stew chicken, sometimes called brown stew chicken. Quite understandably it is a chicken stew with common Caribbean flavours. It's delicious and comforting. I had tried it a few times at West Indian eateries but never tried making it myself until putting this post together. What interested me in this dish was the preparation and how it differed from, say, the French technique for a chicken stew. When I say French technique chicken stew, I mean pieces of chicken that are seasoned and dredged in flour then seared in batches. Then removed and set aside. In the same pot, certain aromatic vegetables are cooked in a particular order according to cooking time. Then the chicken pieces are reintroduced along with a liquid and then basically braised until the chicken is cooked through and the sauce has reduced (the flour which dredged the chicken in the beginning also acts as a thickener for the sauce). We have more or less covered that same process in recipes already on the blog.

This version is quite different. Instead the pieces of chicken are seasoned and left to marinate with other ingredients for a period of time. Then brown sugar is fried in an equal amount of oil until it melts and begins to boil. Then all of the chicken and the contents of the marinade are added to the oil and brown sugar. The mixture is cooked down for a few minutes before adding liquid and allowing it to braise until the chicken is cooked through and the sauce reduces to the cook's liking (that's you!). There are different ways to make a Caribbean stew chicken but this version intrigued me enough to try it and share on the blog.

Some people like their stew chicken with quite a bit of sauce so that they can serve it over rice or eat it with some kind of West Indian bread to sop up the gravy. Others prefer to fry the stew chicken right down until the sauce is so thick that it just coats the meat rather than swims in it. As you can see above, I served my stew chicken with traditional rice n peas (and some refreshing, summer watermelon). So I kept my sauce a little thin. You can learn how to make your own rice and peas in my oxtail recipe post.

Before we begin I'd just like to state that this was an experiment, not a traditional recipe, but the results were very tasty.

1 whole chicken or 4 chicken legs, cut in pieces (I used legs only)
1 medium onion, finely chopped
3 scallions (white parts only), roughly chopped
2 garlic cloves, roughly chopped
A few sprigs of fresh thyme
1" fresh ginger, peeled and finely grated (or 1 tsp of ground ginger)
The juice of 1 fresh lime
2 tbsp soy sauce
1 tbsp Worcestershire sauce
2 scotch bonnet peppers, (totally optional or to taste. Scotch bonnet peppers are quite hot. I like spicy food so I used 2 scotch bonnets and removed most of the seeds. That was perfect for me, but do what you like or omit completely)
Salt & pepper, to taste

2 tbsp brown sugar
2 tbsp oil, suitable for frying
1-2 cups (or so) of hot to boiling water or broth from a kettle

Combine the chicken with the onion, scallions, garlic, thyme, ginger, lime juice, soy sauce, Worcestershire sauce, scotch bonnet, salt and pepper and allow to marinate in the fridge for anywhere from one hour to overnight. 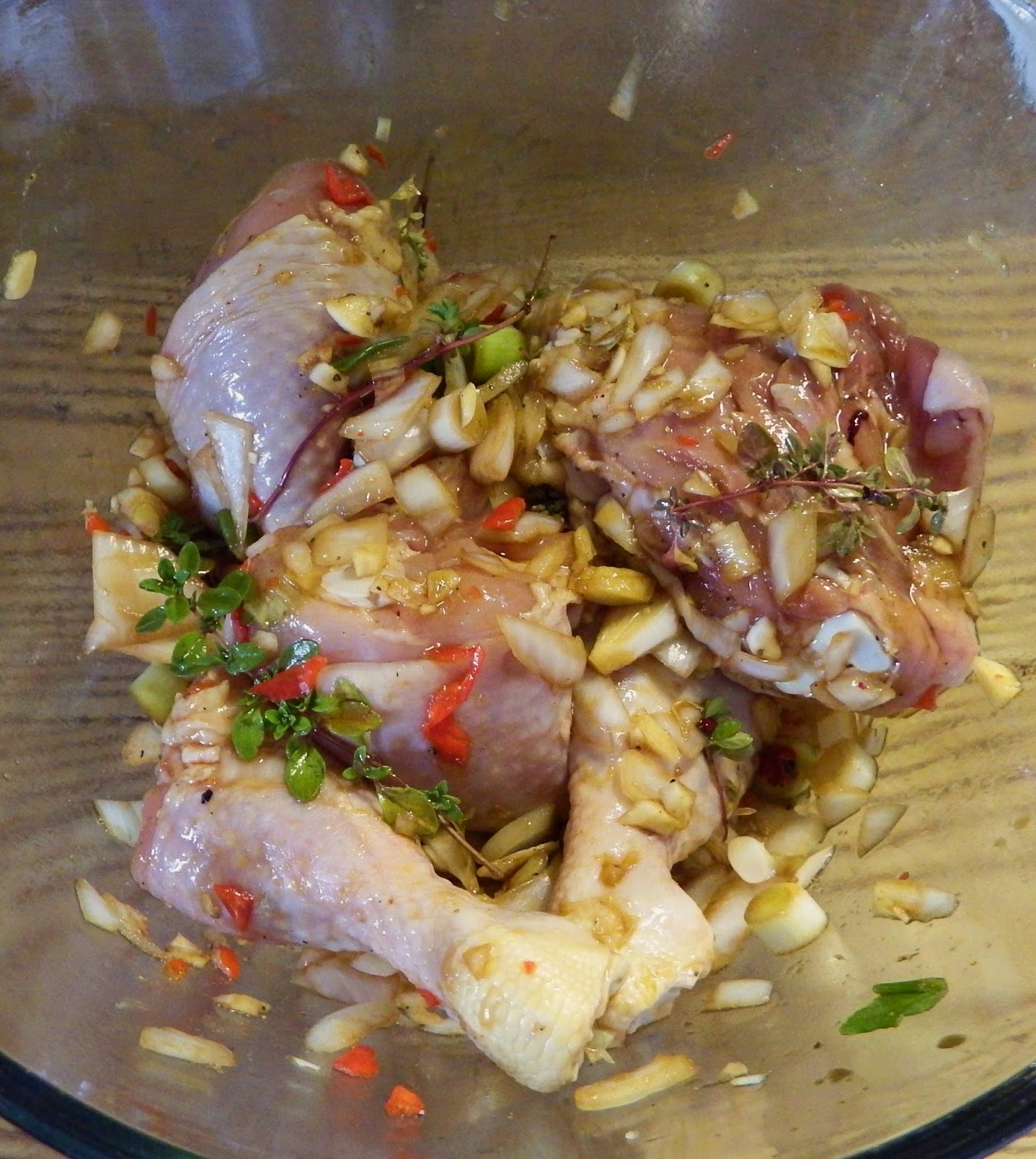 Using a dutch oven or heavy bottomed pot, heat 2 tbsp of oil over medium-high and add the brown sugar. Mix with a wooden spoon until the sugar melts and just begins to boil. Be careful not to let it go much further than that as the sugar will scorch if it burns. 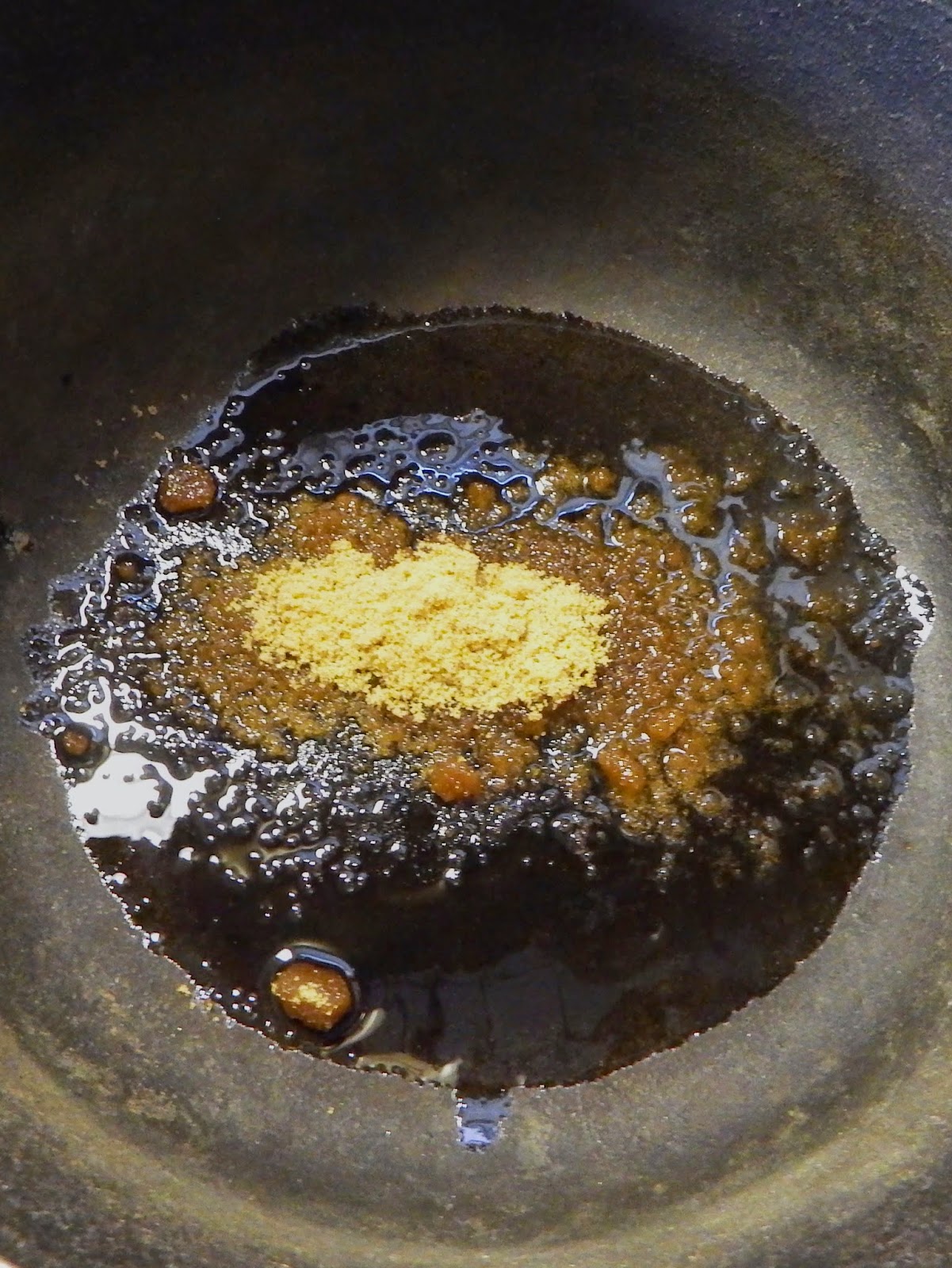 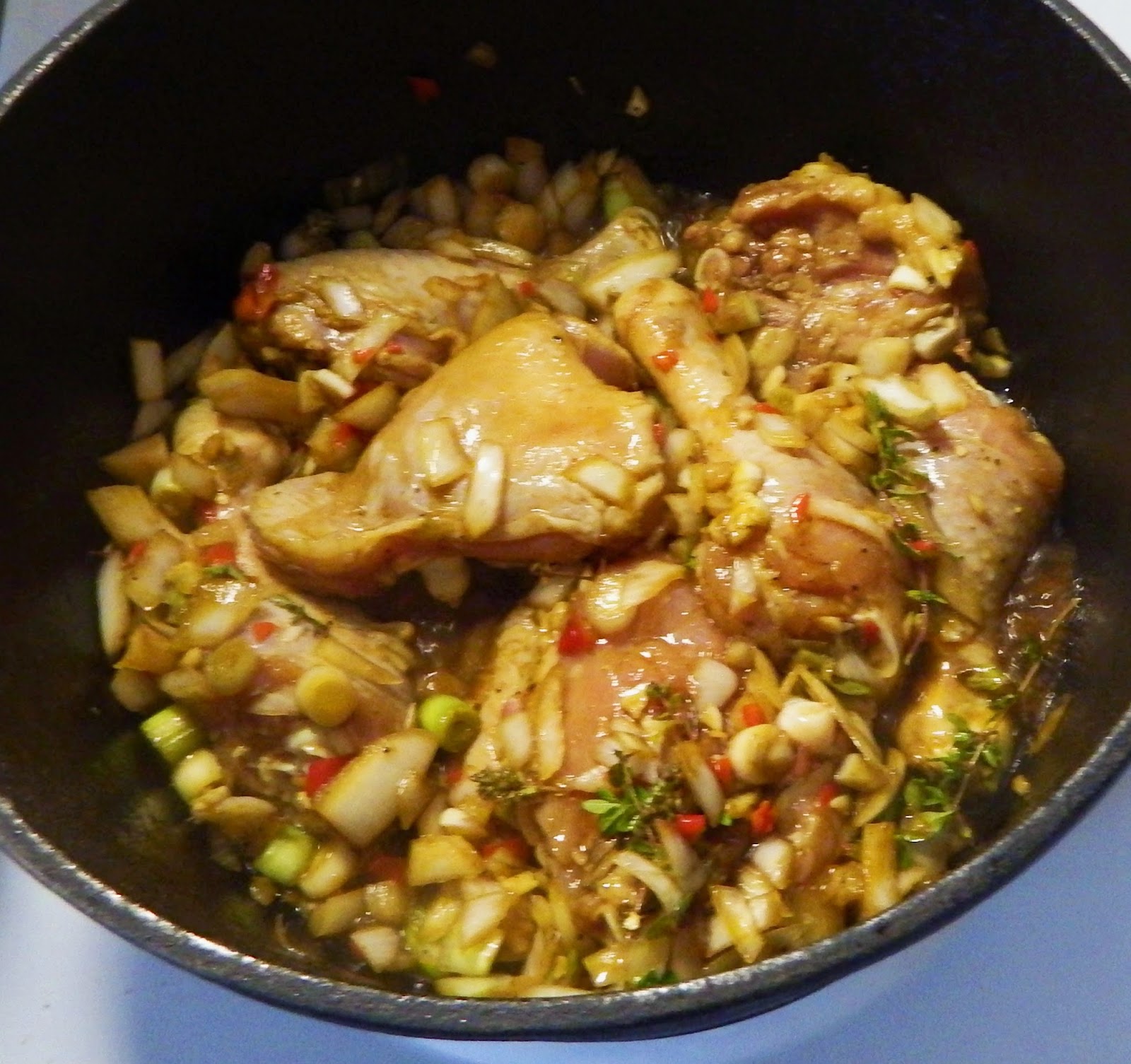 Stir for about five minutes until the onions cook down and become quite soft. 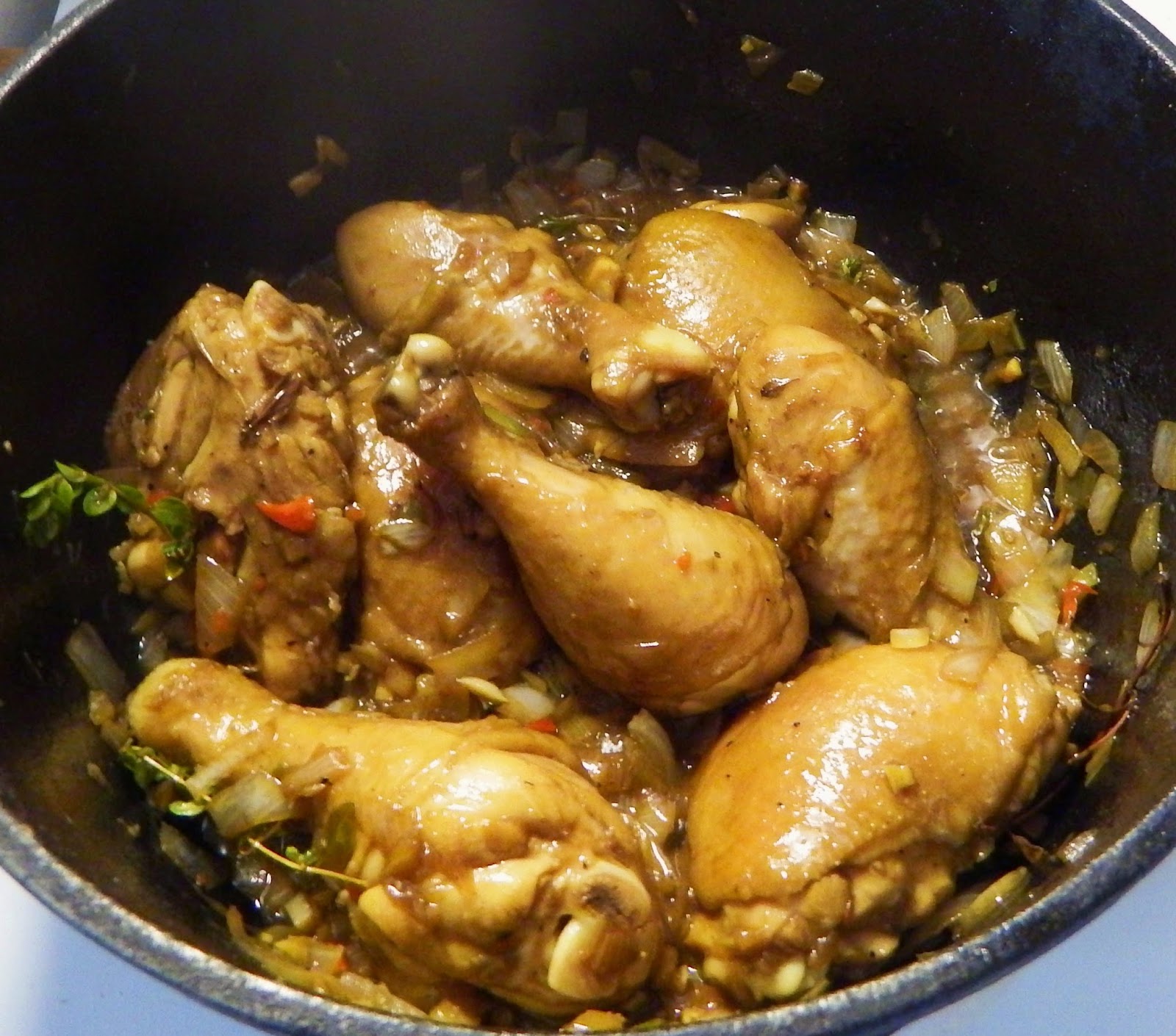 Then add about a cup or two of hot to boiling water or stock from a kettle. If your liquid is too cold it will shock the ingredients and spoil the flavours. I encourage you to eyeball the amount of liquid you add. If you want a saucier stew add more. If you want a slightly drier stew, add less. Best to add a little at a time. You can always add more if you like, but it is harder to remove any excess. 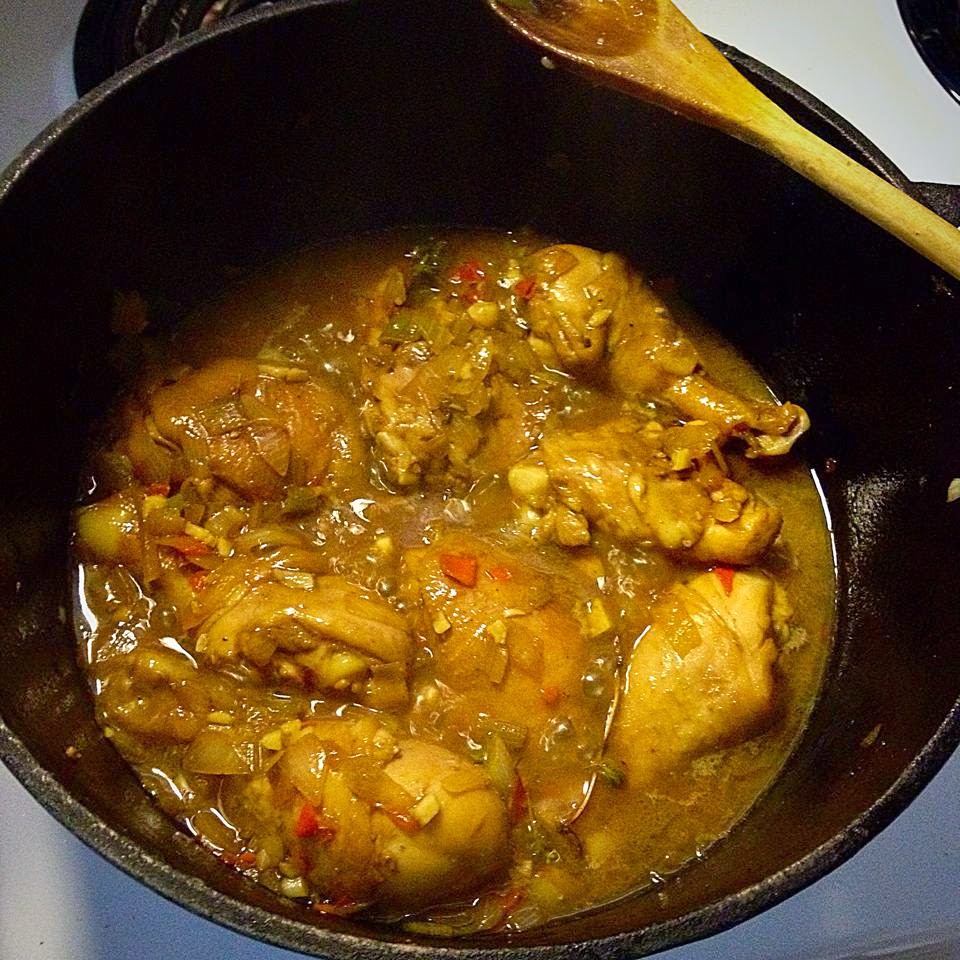 Reduce the heat to low and allow the liquid to simmer. While stirring occasionally, let the stew blip away until the chicken has cooked through and the sauce has reduced to your liking (at least twenty minutes). 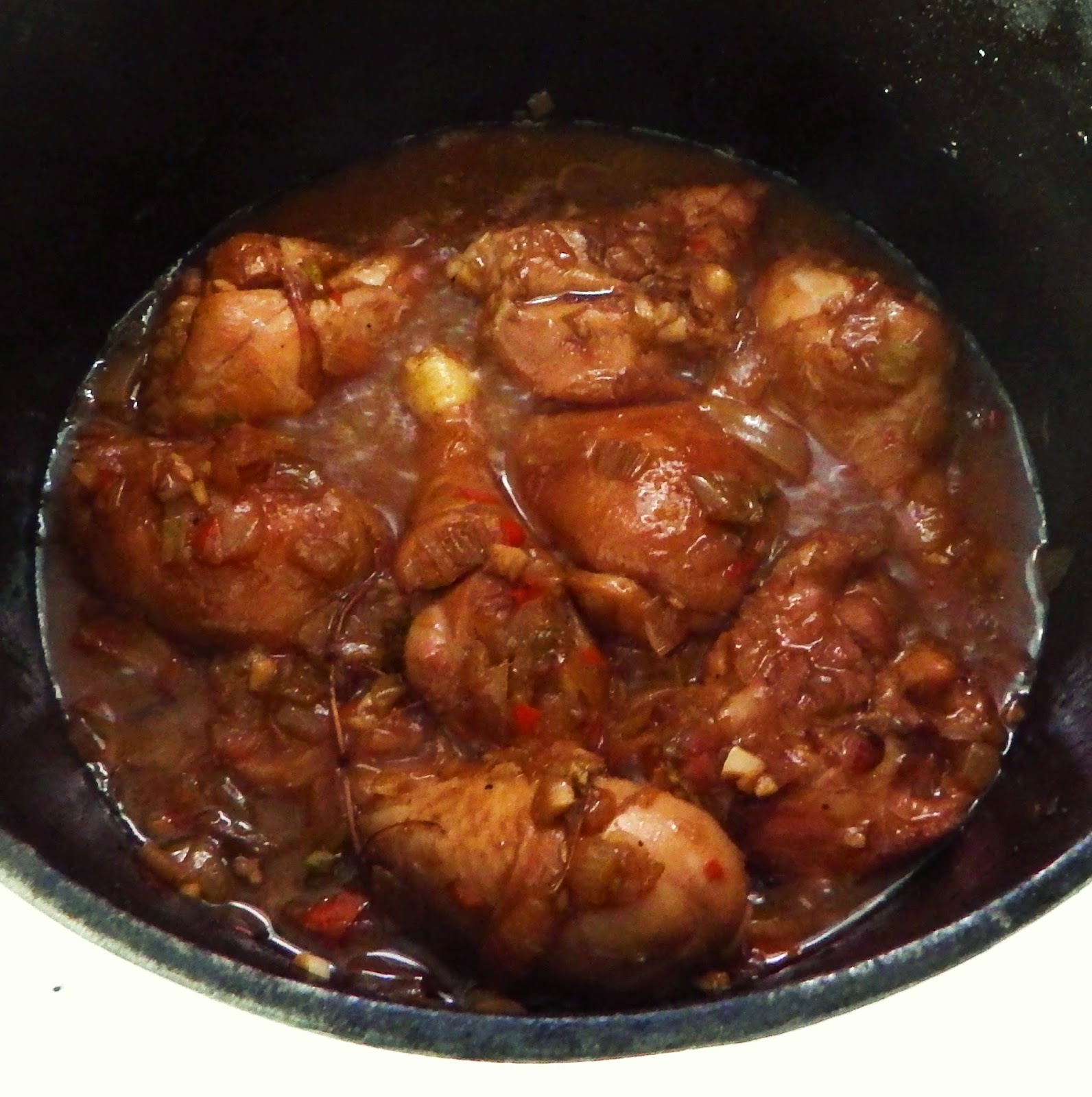 Then your stew chicken is ready to serve. The only thing left to do is remove the sprigs of thyme and serve with your favourite side dishes. Rice works great to sop up any extra sauce.

This is a simple, delicious recipe that is satisfying and makes your kitchen smell great. Eating chicken right off the bone is, in  my opinion, the tastiest and most flavourful way to eat chicken. This dish is a great vessel to enjoy that experience. Have fun with this recipe. Adapt it any way you like. I love Caribbean/West Indian food because although it is unique in its own identity, it is also a fusion of all the cultures that have contributed to the area over the centuries from aboriginal, African, European, Indian and Oriental Asian elements. It's always a pleasure to the pallet.

This is a basic chicken stew but you can add carrots, potatoes, beans or just about anything you like, really. Have fun!

Tip: Since you only used the white part of the scallion for this recipe, you could thinly slice the green parts and use them as a fresh garnish when you serve.
Posted by BramLlewellyn at 20:34