I hope everybody has had a great holiday season. I spent Christmas with family out of town. This year was special because my cousin's husband's parents flew in from London to spend it with us. We all agreed to share in some of our Christmas traditions together. We all get along really well and had a lot of fun. It really has been a great wrap up to a great year. I thought I would, as I do, share photos of the food we prepared. Like many other families, food is something that we're passionate about and it brings us together. This Christmas had a nice combination of traditional and new dishes.

Christmas morning my aunt and I prepared Eggs Benedict. That's a toasted English muffin with a piece of ham (we usually use peameal bacon), a soft-poached egg and a rich hollandaise sauce. We have made Eggs Bene (Benny) a couple of times before. Hollandaise sauce can be temperamental and of all the times we've made it this one turned out the best. 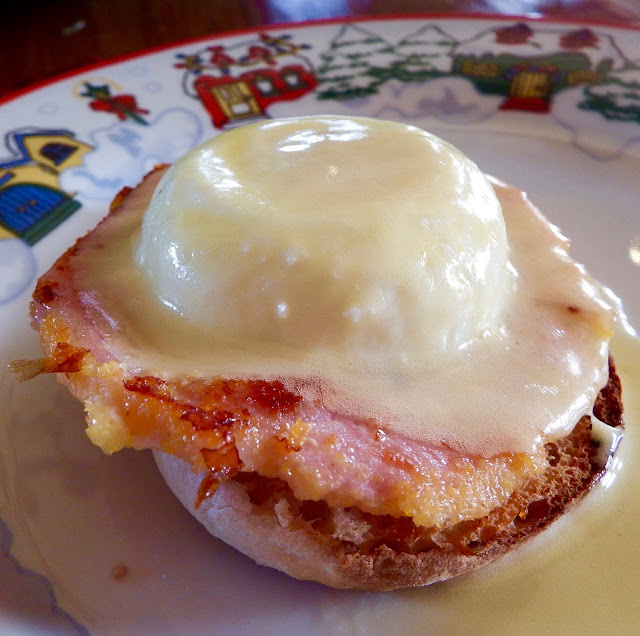 Later on in the afternoon we had what we've dubbed "twosies" which basically means snacks that we have around 2:00. This is where we sampled the Jamieson's British Christmas dishes. Liver pâté is a common Christmas tradition in many European countries. They prepared a chicken liver pâté puréed with shallots, herbs and spices then sealed with a classic layer of rendered fat with a decorative bay leaf in the center. The pâté is then chilled to set. It's up to the individual to eat the fat or avoid it, but it does have flavour. The practical use for the layer of fat is to create an air barrier that will prevent the liver in the pâté from oxidizing while it sets. We also had a variety of cheese and assorted crackers. 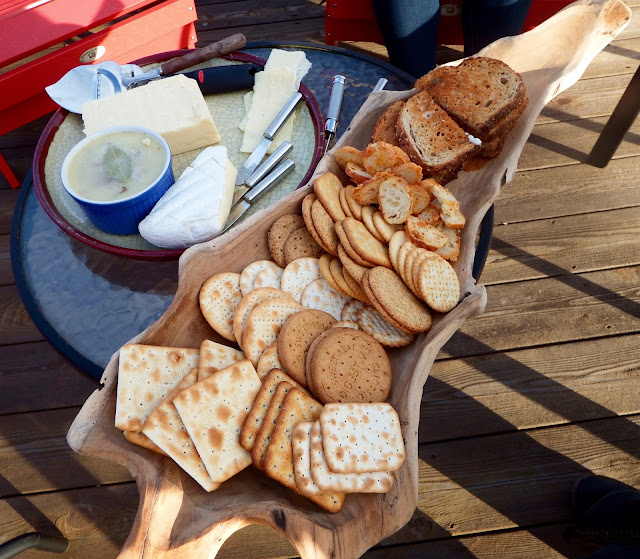 They also prepared a traditional salmon mould which I'd never tried before. It had all the retro charm of black and white TV! It's basically a salmon mousse with aromatics, herbs, seasonings, mayonnaise and gelatin then moulded into the shape of whatever container it sets in. Traditionally the mould is turned out onto a serving platter, lightly coated in mayonnaise and then decorated with vegetables; in this case cucumber, tomato and capers. It was beautiful, colourful, Christmassy and I have to say not bad at all on toast. I quite like mayo on or in certain things. I love mayo with cucumber and tomato and the rest of it kinda seemed like a sophisticated tuna salad sandwich, only with salmon.

They also made a big batch of mulled wine which was red wine and brandy warmed up on the stove with cinnamon sticks and an orange studded with several cloves. It smelled amazing and was quite tasty. 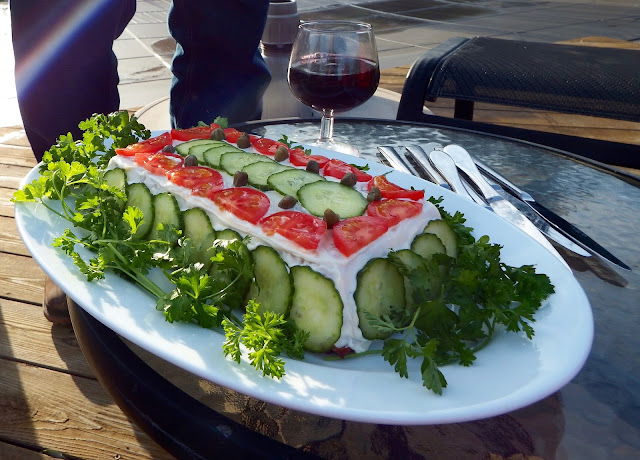 We brined our Christmas turkey again this year. This time we added a few other things to our brine like a bottle of champagne, clementines, sliced ginger, mustard seeds, coriander seeds and cinnamon sticks... along with the usual, salt, sugar, pepper and woody herbs. Brining always ensures a really flavourful, juicy turkey! 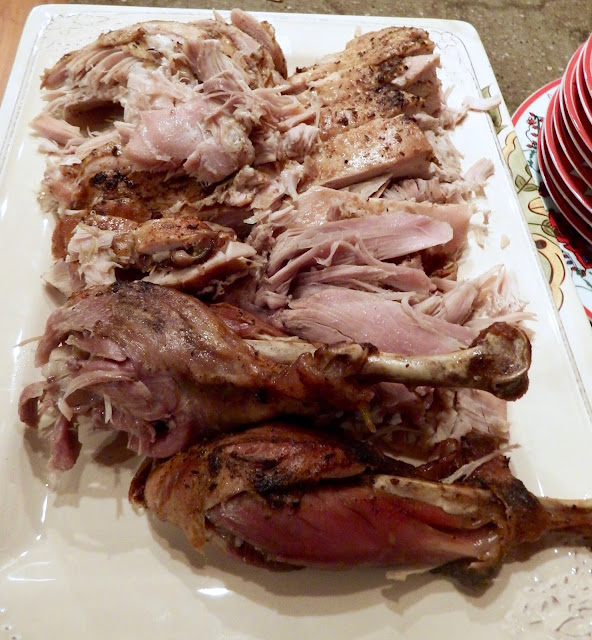 We also roasted a spiral ham with a brown sugar, molasses and spice glaze. 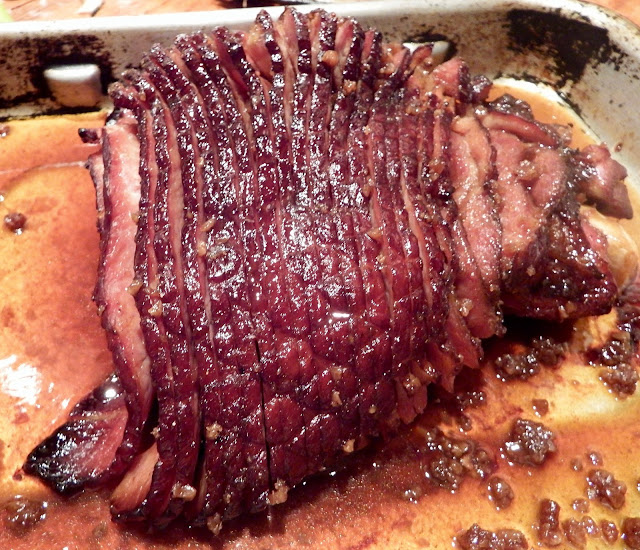 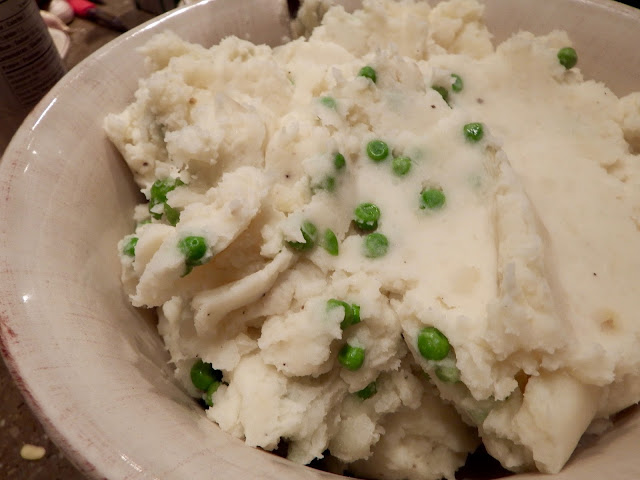 We tossed parsnips, cauliflower, carrots and onions in olive oil, salt, pepper and Middle Eastern Za'atar spice then cooked them in a perforated pan over the barbecue so they got nicely charred and smoky. 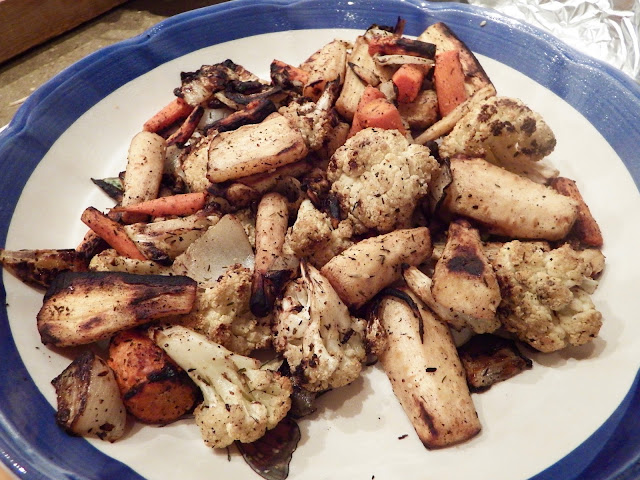 Side dishes included bread and sausage stuffing, cranberry sauce and (of course) gravy! Here is a shot of my Christmas dinner plate. 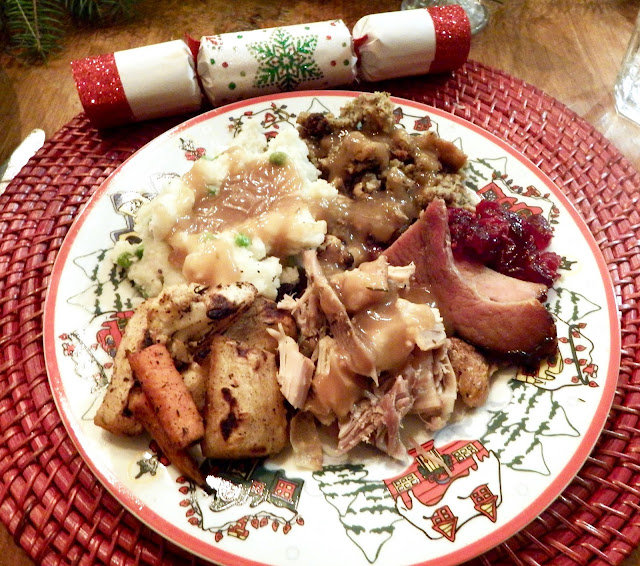 After dinner we enjoyed a semifreddo with raspberries and blueberries which we prepared the night before. A semifreddo is a partially frozen custard similar to ice cream. It was creamy and delicious. 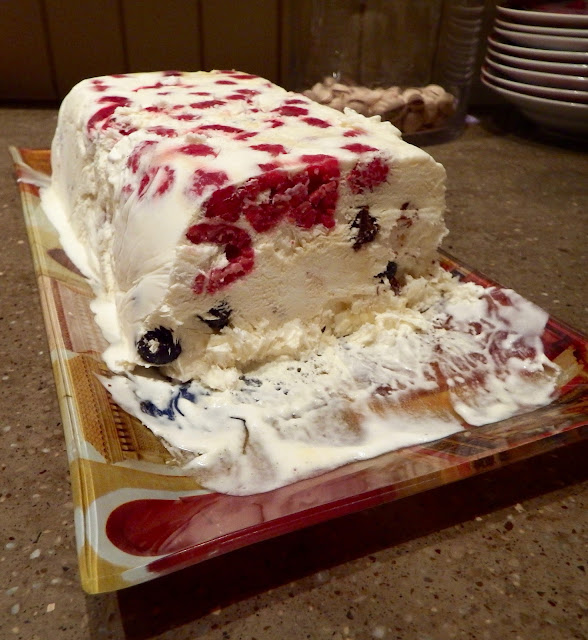 I gave my aunt and uncle a waffle iron for Christmas. My uncle in particular was excited to try it out for breakfast on Boxing Day. We made wild blueberry waffles with more wild blueberries on top with maple syrup, bacon and eggs. Pictured is one of the first waffles we made. The more waffles we made the better we were at achieving a nice, crispy golden crust. 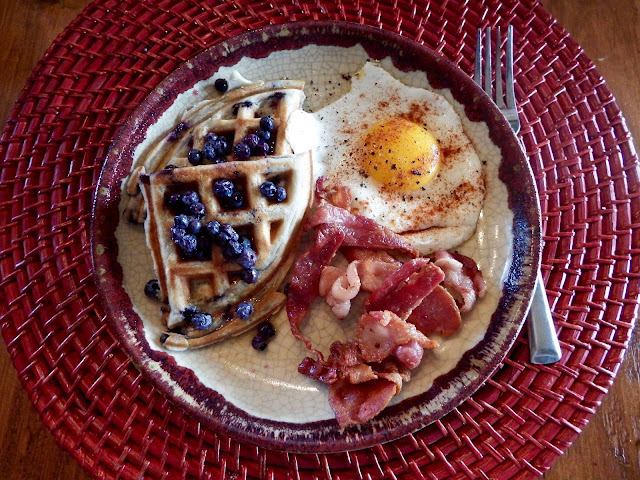 Every Boxing Day we head north to Stayner, Ontario to visit my uncle's brother and his wife. It's always a large gathering of mostly my uncle's side of the family. There is always a ton of food! 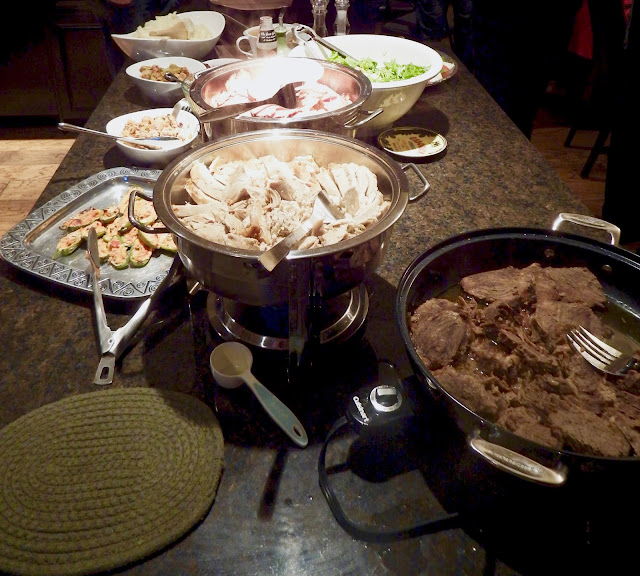 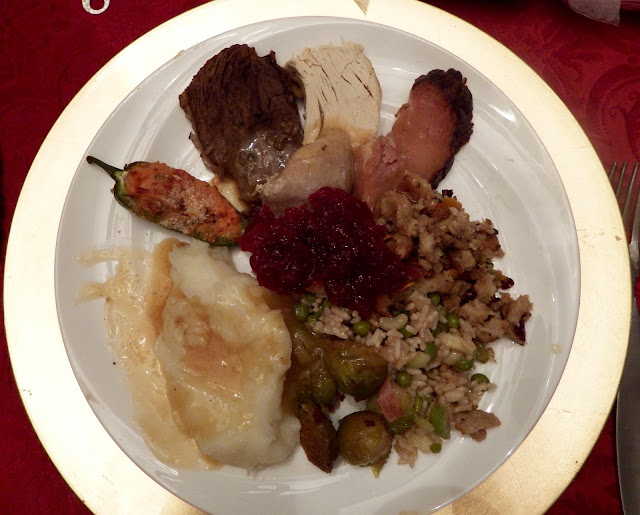 My second plate I got to get my fill on the salads. They was a make-your-own Caprese salad section with mozzarella, tomatoes, basil, olive oil and a balsamic glaze and a green salad with blue cheese, almonds and apples. 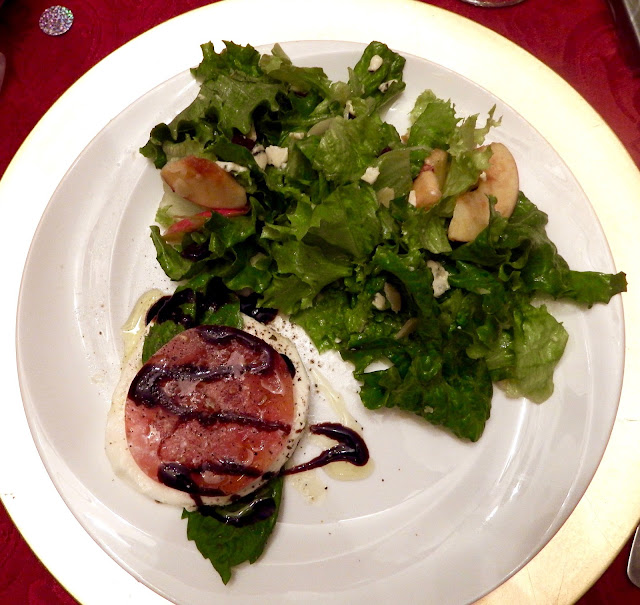 As if that wasn't enough, afterward came an onslaught of sweets, desserts and coffee. There was apple pie, brandied butter tarts, walnut-raisin cinnamon rolls, strawberry cheesecake cups, brown sugar-chocolate chip cheesecake, ginger-lemon loaf, fresh vanilla whipped cream... all of which are beautiful and delicious but to me there can only be one. I look forward to it every year... 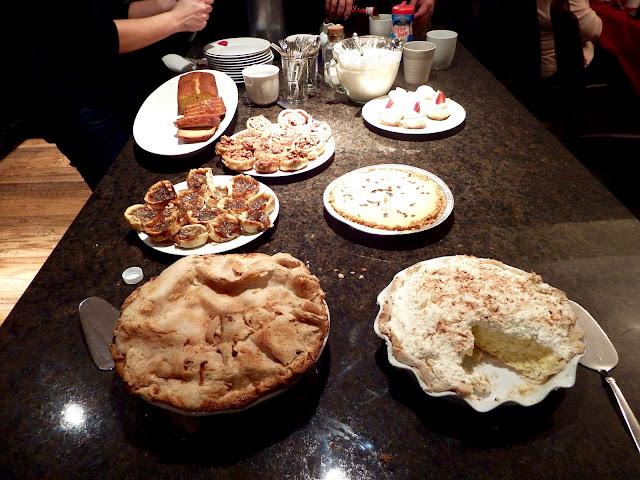 Tara's coconut cream pie. Tara is my uncle's brother's daughter and she makes the best coconut cream pie this side of anywhere. It's just perfect in its simplicity. Flaky, buttery crust topped with a thick layer of creamy coconut filling and flakes of toasted coconut on top. I love it because of the texture and the fact that it has a nice flavour and is not too sweet. The last thing I want to do is eat something overly sweet after a very filling meal. It always does the trick. 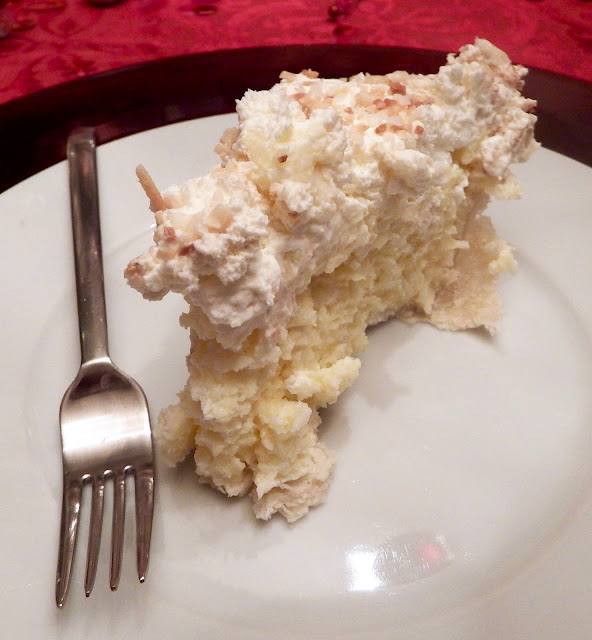 Now that the holidays are over it's time for me to get back into healthier and more balanced meals. Last night for dinner I took some leftover Christmas turkey and used it in a delicious curry chana (chickpea) soup with puréed lentils, mirepoix, garlic, kafir lime leaves and some of the scotch bonnet-mango sauce I made this year. It was so good that I wolfed down two bowls! 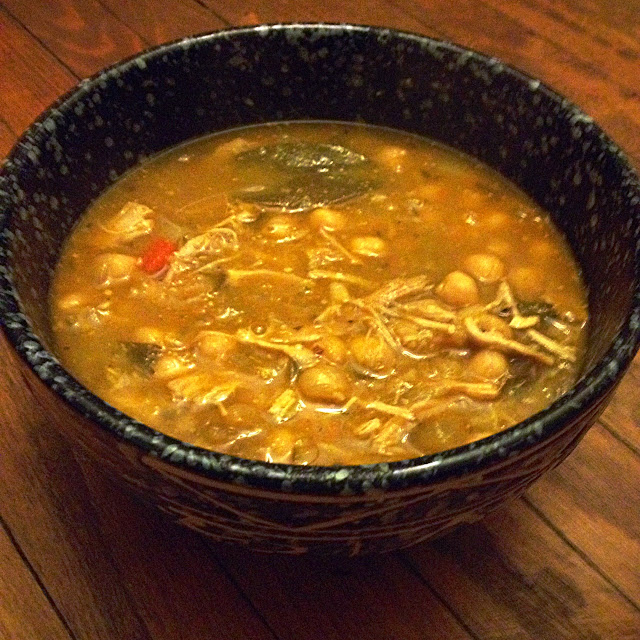 That's all I have! I hope everybody has a safe and wonderful New Year's. I'm looking forward to see what 2016 has in store for myself and the blog. Surely there will be lots of delicious recipes and practical techniques to help us all become better cooks!

Until next time, all the best!

B
Posted by BramLlewellyn at 18:01