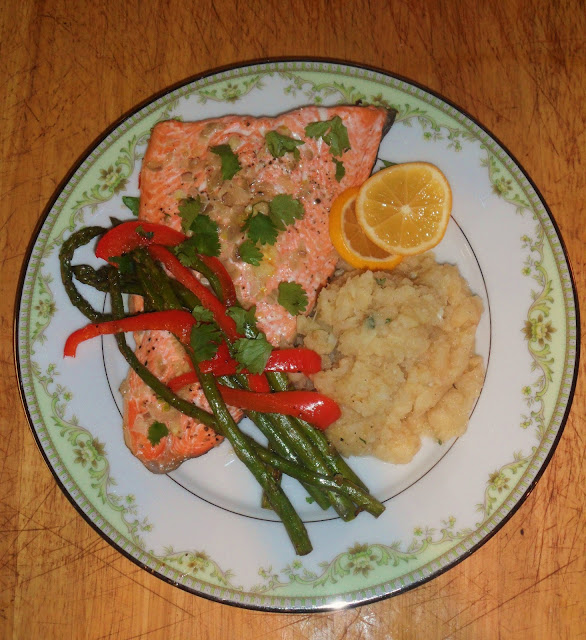 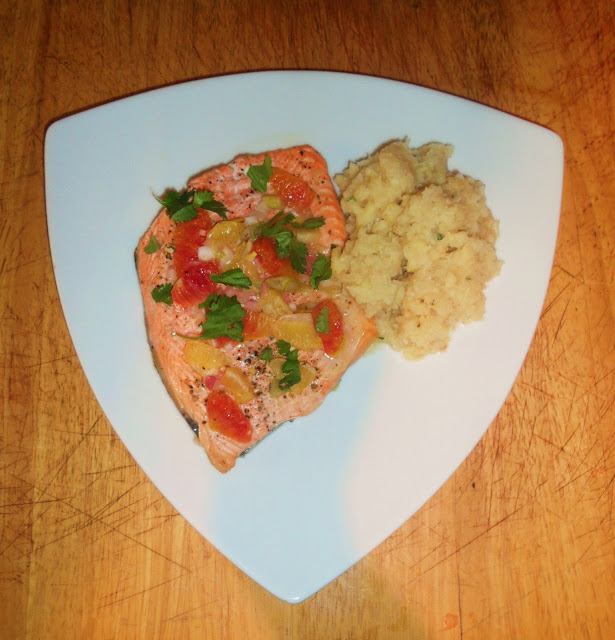 Say it with me now, "Pwa-sohn ahn pa-pi-yutt". Sounds exciting doesn't it? Fancy and almost romantic. What if I were to burst your bubble and reveal that all that means in English is "fish in parchment paper" (also known as baking paper). I know, right? Everything sounds better en français. Whether or not the combination of the words 'fish' and 'parchment paper' sound appealing to you, this is a stupendous kitchen technique. I'll give you the following list of reasons why:
What you do is take a piece of parchment paper and make a bed of aromatic vegetables or fruit on or near the center (more on that in a bit). Then lay a fillet of fish over your aromatics of choice and add more vegetables/fruit, seasoning, spices, herbs, etc... on top of the fish. Then, by folding very simple pleats around the edge of the paper, form a parcel that envelopes your food. The parcel is placed in an oven for 12-15 minutes and then not only is it done, but it's perfect. The parcel is airtight, therefore the fish and whatever else you put in with it steams in its own juices and cooks fast. It's one of the best ways to get a very nutritious meal with maximum flavour and very minimal effort or time.

With that being said, we had a few setbacks. A good idea would be to make sure you have enough parchment paper! I thought I did and realized halfway through that was not to be the case. It was late in the evening so I rushed out to find places in the area that might carry it. My options were either closed or didn't have any. I was semi-lucky enough to find a restaurant that let me use some of theirs but they only carried them in 14"x14" square sheets, which weren't quite big enough but it worked for the most part. I had prepared a friend of mine's piece of fish the way I prefer (with a slightly rectangular sheet) and my own with the two sheets from the restaurant. Since I was planning on folding both parcels the same way, I didn't bother to take photos of the first one. So I only have photos of the process that didn't work quite as well but I'm sure you'll get the idea.

Let's go over the papillote part first. I prefer to take a rectangular sheet of parchment paper (about 18" x 24") and place the fish just slightly off center. Then bring the larger side of paper over the fish so that the corners of the paper meet. Starting at one corner, make one firm fold and then continue to make more folds around the perimeter. The goal is to make even pleats all along the edge. Be sure to press as you crimp and fold to ensure that the parcel will be airtight. When you get to the end, be extra sure that the last fold is firmly pressed. You can use a heavy saucepan to push down on it for a few seconds so it stays in place. I prefer this method because you only have to make the folds on one side. Some people prefer to cut a heart shape out of the paper to make for an easier fold, but I don't really think it's necessary. With the method pictured below, you take two square pieces of parchment paper, layer your fish and veg in the center of one sheet, place the other sheet over top and crimp the whole way around. 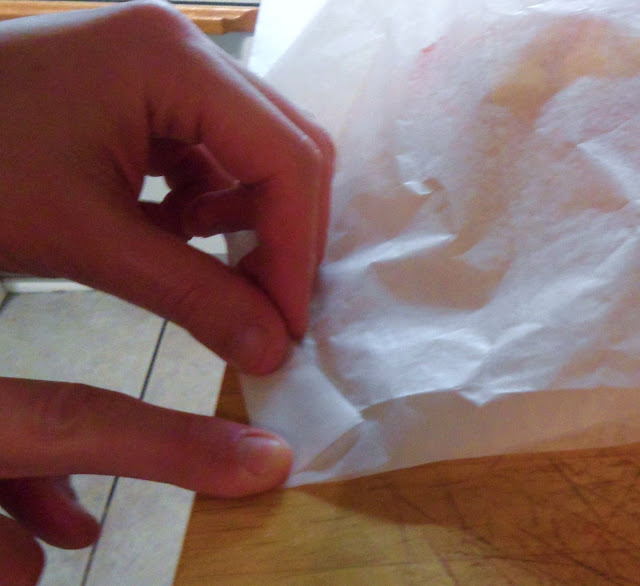 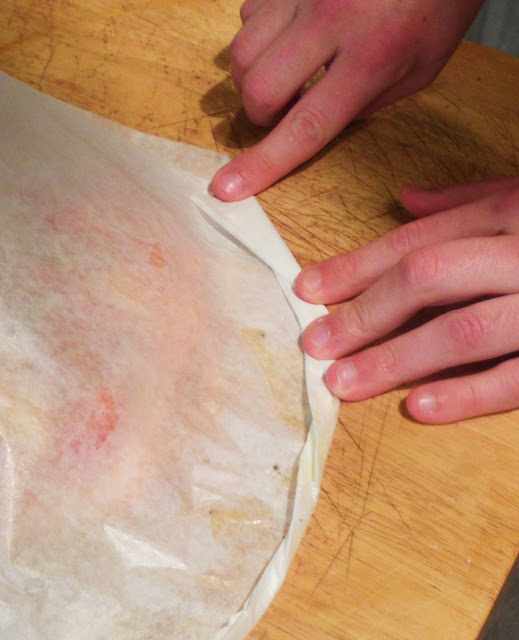 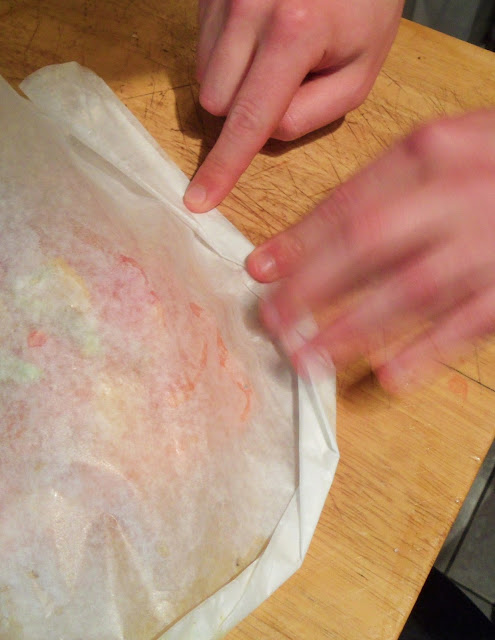 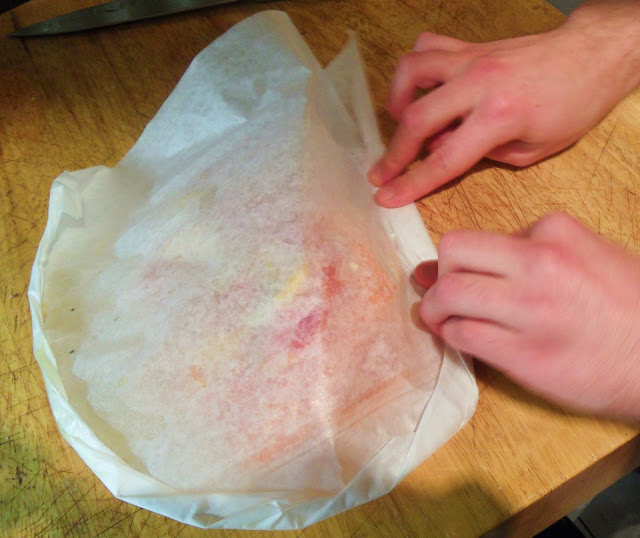 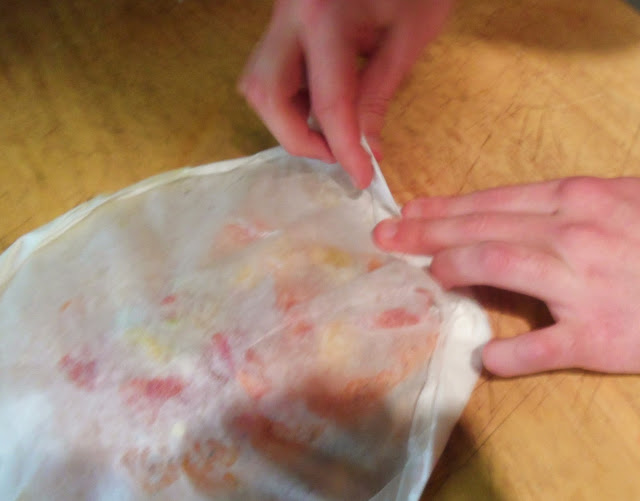 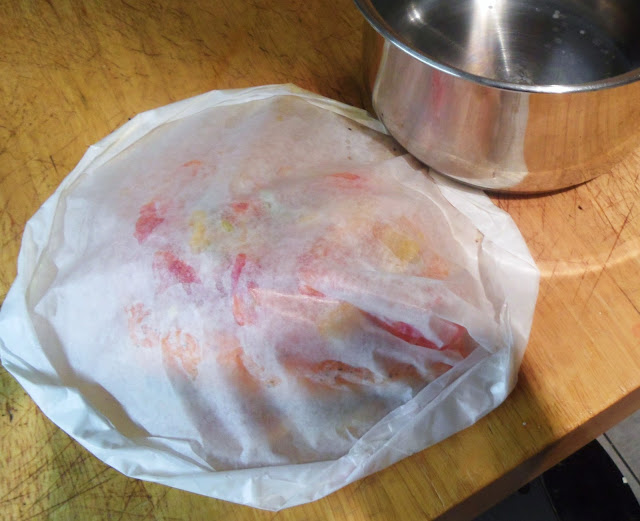 We split a fillet of Arctic char which is an oily, red fish similar to trout or salmon. 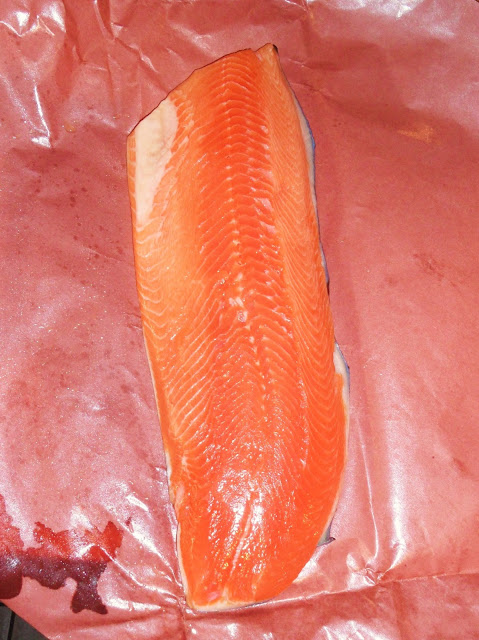 My friend took the thinner tapered half of the fillet and chose red pepper, asparagus, garlic and shallots for her flavours. Here is how it's done. 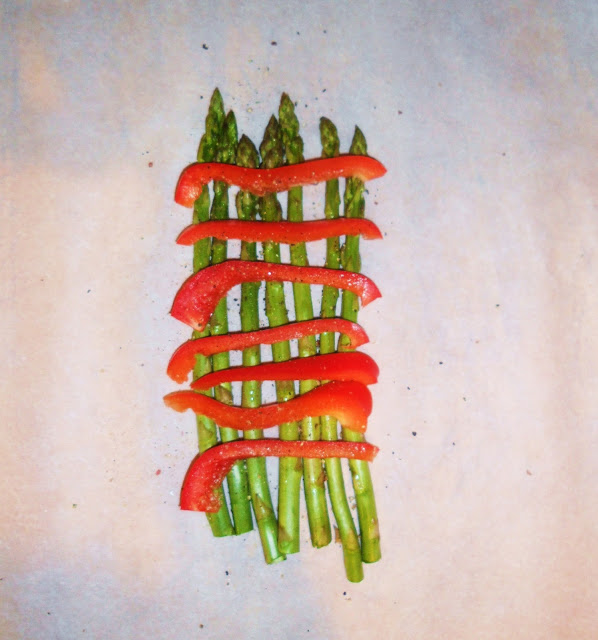 Make a bed of asparagus and slices of red pepper on the parchment paper and season with salt and pepper. 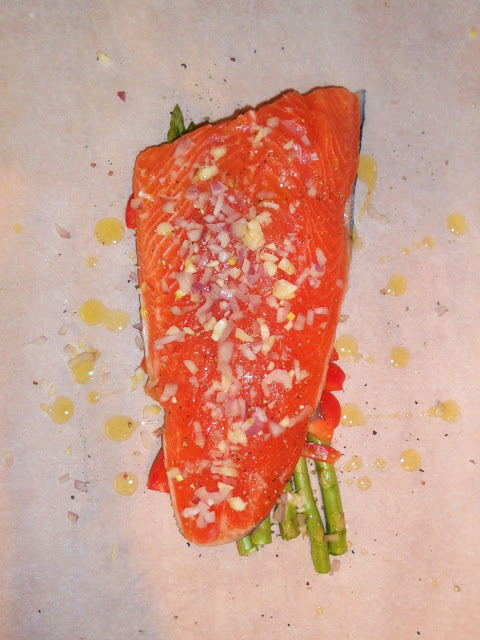 Then place the piece of fish over the vegetables, season with more salt and pepper, then add minced shallot and garlic. Finish with a little olive oil before wrapping the parcel.

For my half, I tried to go a little more exotic with the flavours and use blood orange, Meyer's lemon, scallion, ginger, and shallot. It wasn't bad. It was missing a dimension though. I had ground cardamom (which I think goes great with citrus, orange in particular) but in all the excitement of running around my neighbourhood on a mission for more parchment paper, I completely forgot to add it! So there are my two biggest pieces of advice in this post. One, make sure you have enough of the supplies you need for a recipe before you start. Two, don't forget to use all your ingredients. I made those mistakes so that you could learn from them. Cardamom could have been the missing note. Fennel also would have worked (either the bulb, fronds, or seeds). It may have even been able to use the brininess of capers or olives. Maybe I'll never know. Anyway, here's how we assembled mine. 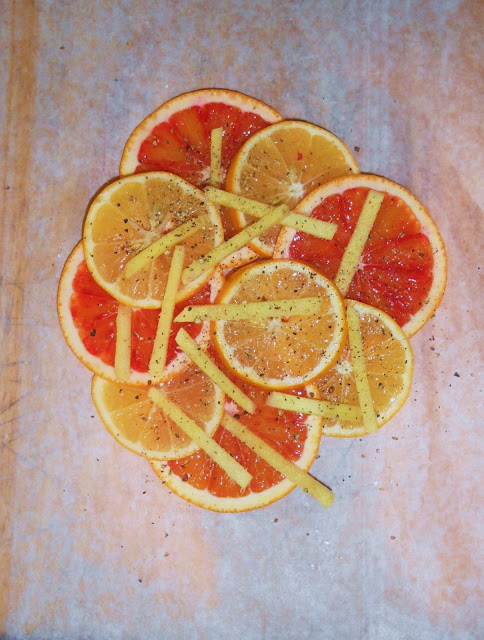 Arrange slices of blood orange and Meyer's lemon with matchsticks of fresh ginger. Season with salt and pepper.
*Interesting fact, a Meyer's lemon is a cross between a lemon and a tangerine, making it both sweet and tart. 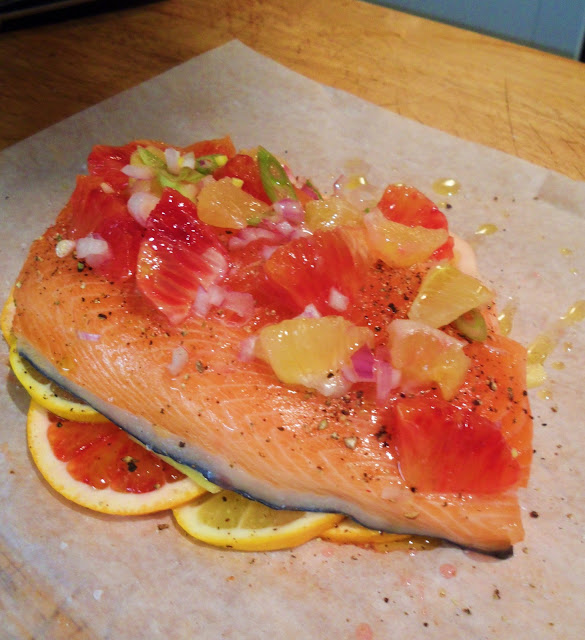 Then place the fish over the citrus and season with more salt and pepper. Add more blood orange, Meyer's lemon, shallot and scallion on top. Finish with a drizzle of olive oil.

There is a specific cut I used for the citrus that went on top. Somebody coined the name "citrus supreme" which refers to slicing the peel and pith off of your citrus fruit and then cutting out the segments exposing the juicy flesh with little or no skin. Any part of the fruit that's not used gets eaten by the cook. In the photo below, you can see how I've started with the blood orange while the Meyer's lemon supremes are to the right, each sliced in half. 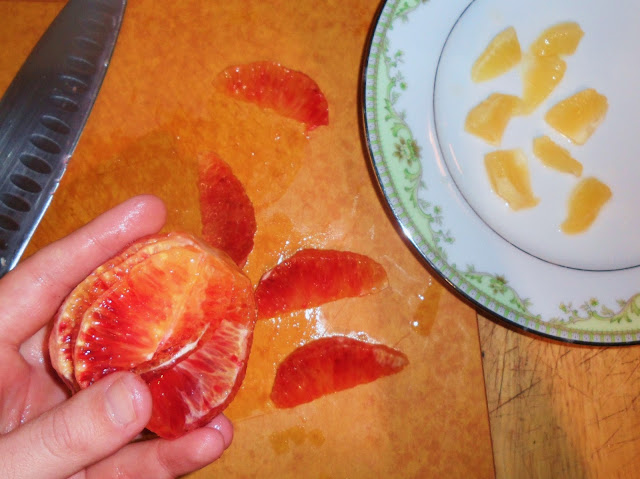 Before your parcels go into the oven it should already be preheated to 350 degrees Fahrenheit (175 Celsius). So in this photo you can see the nicely prepared one on the right (see what I meant earlier when I said 'you only have to make the folds on one side') with the sketchier one on the left that just barely made it into satisfactory status. 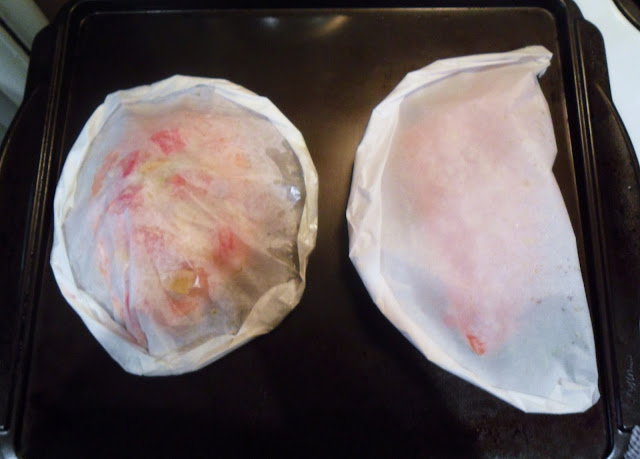 Those went into the oven and 12-15 minutes later, the parcels puffed up and once unleashed they looked like this. Just be careful piercing the parcel and opening it up because it will be full of hot steam. 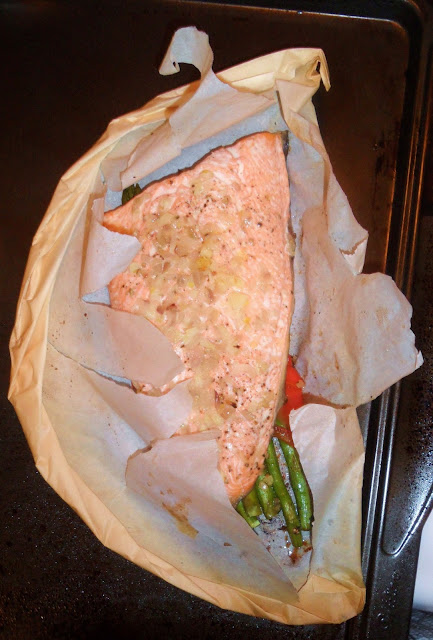 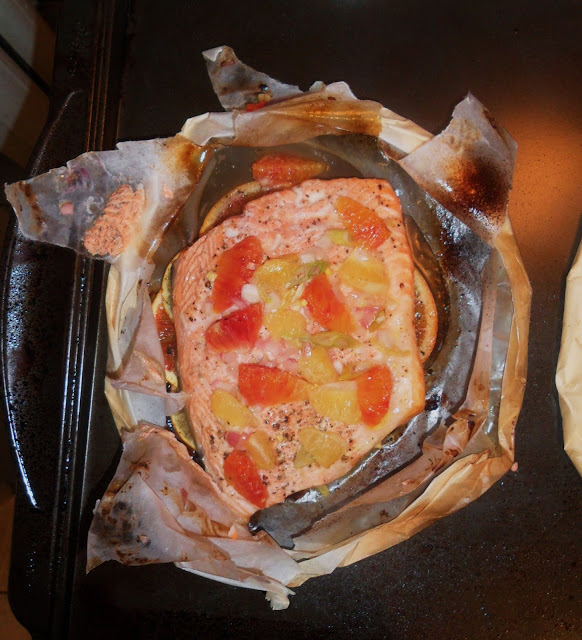 You could serve the fish out of the paper as is. It makes for an interesting presentation. We decided to remove the fish from the paper and plate them because we made an extra side dish. You may have noticed a serving of something mashy in the first two photos of this post. We made mashed celeriac with garlic and thyme. Celeriac (or "celery root") is a relative of celery which kind of resembles a turnip. The texture is also similar to turnip but the flavour is a cross between celery and mushrooms. It's very interesting. You could even mash potatoes and celeriac together. If this sounds like something that might appeal to you, keep reading. 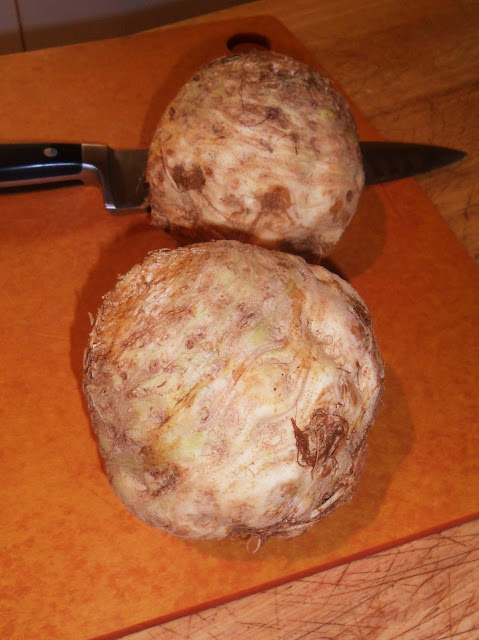 You want to peel the exterior of the celeriac off first. You could use a vegetable peeler if you are a heretic but if you're not, then be like me and just use a kitchen knife. 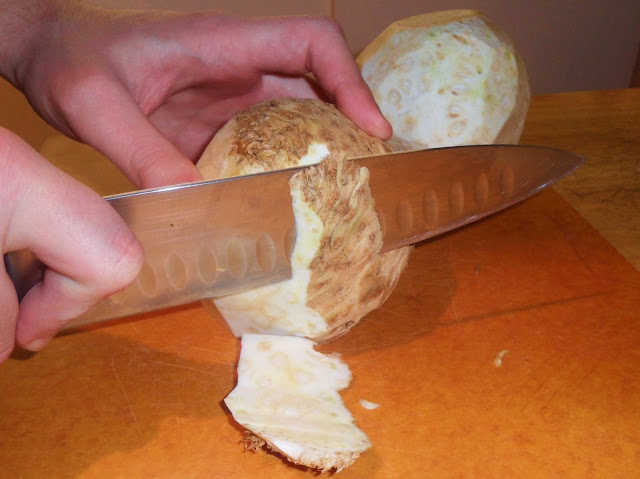 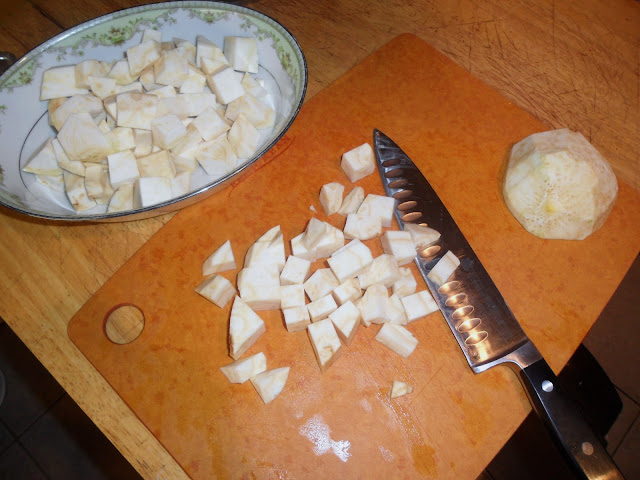 For garlicky celeriac I recommend using one crushed garlic clove per bulb. We only used one garlic clove for two celeriacs and sliced it in half because as you can see, it was gargantuan. 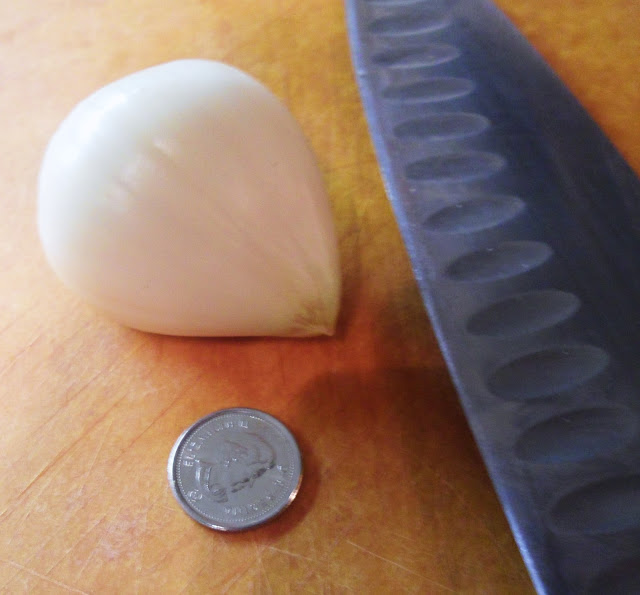 Place the celeriac and garlic in a pot of water and bring to a rolling boil. Let cook for 30 minutes or until tender enough to cut effortlessly with a knife. 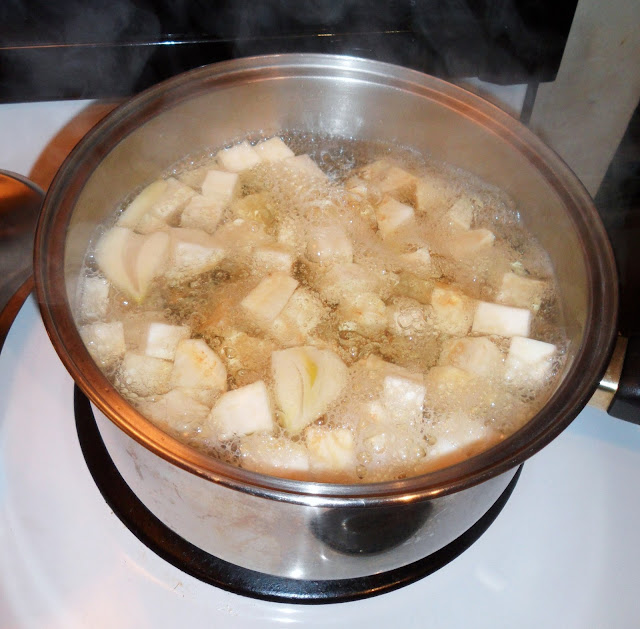 Drain the veg and then add a tablespoon of butter and 1/3 cup of chicken broth or stock (you could also use milk). Pick the leaves from a few sprigs of thyme and add them too. 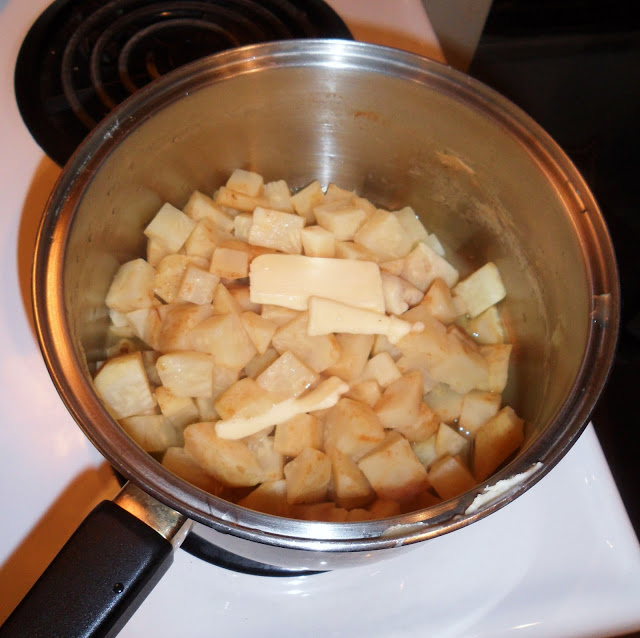 Use a potato masher to smash everything together and serve. 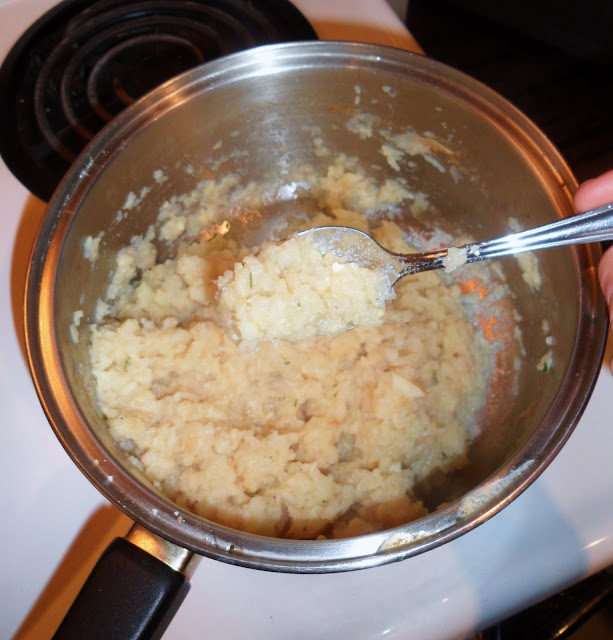 There you have it! Artic char en papillote two ways AND a great celeriac side dish. I hope this makes up for this post being a day later than I originally had hoped. Please try this technique at home. As you can see it's easy, fast, and there's nothing that isn't good for you that goes into it. You will be happy you did.

Thanks for checking the blog. I have really appreciated the feedback and support that I've received from you so far. I'd love to hear about how your own poisson en papillote turns out and what flavours you chose.

B
Posted by BramLlewellyn at 19:02