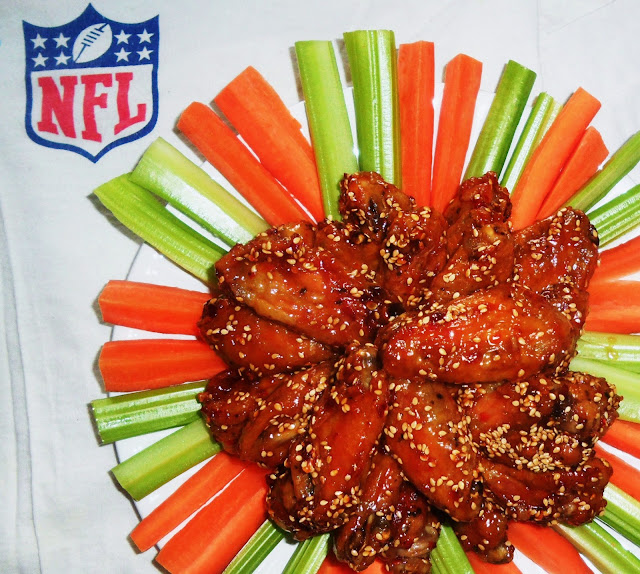 The Super Bowl is in one week. All across the continent friends, family and barflies will be stationed in front of television sets cheering for their team and chowing down on their favourite football eats. A cornerstone to any Super Bowl feast is chicken wings. These lip-smackingly delicious wings could be the star of your Super Bowl party. I'm going to share the recipe but most importantly a good chicken wing technique that can be used in so many different applications. I made a spicy orange sauce with ginger, garlic and hoisin, but you could serve your wings in any sauce you want like barbecue, honey garlic, hot sauce, teriyaki, Jamaican jerk, etc. I'll show you a way to oven fry chicken wings with a light, crispy breading that will stay crunchy while holding on to the sauce of your choice. I adapted a recipe of Chef John's from foodwishes.com, a man who really knows chicken wings among many other dishes.

This recipe calls for marmalade or orange jam. By itself, I am not a big fan of the stuff. It's a little bitter for my taste. Try to find marmalade that has as little pith as possible (the white part of the peel). If you can only find marmalade with a lot of pith, you can just warm it up in a saucepan until it's thin enough to run through a strainer and most of those bitter bits can be easily removed. The recipe is set for five lbs of chicken wings, which can easily satisfy eight to ten people. I only made about half that so you will need 2 baking trays for this recipe instead of the one pictured. Let's do this.

You are going to need:

Start by seasoning the wings with salt and pepper. Mix them in a bowl with a spatula until evenly seasoned. Then place the wings in a large plastic bag with the 1 cup of flour. Twist the bag at the top so you don't get flour all over your kitchen. Shake the bag until the wings are evenly coated (or "dredged") with flour. The light coating of flour will crisp up in the oven and be amazing. Place on a baking tray lined with tin foil that's been lightly oiled. It should look something like this: 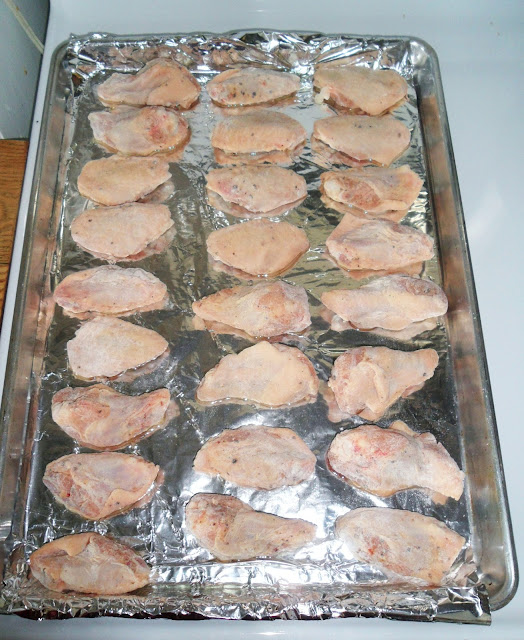 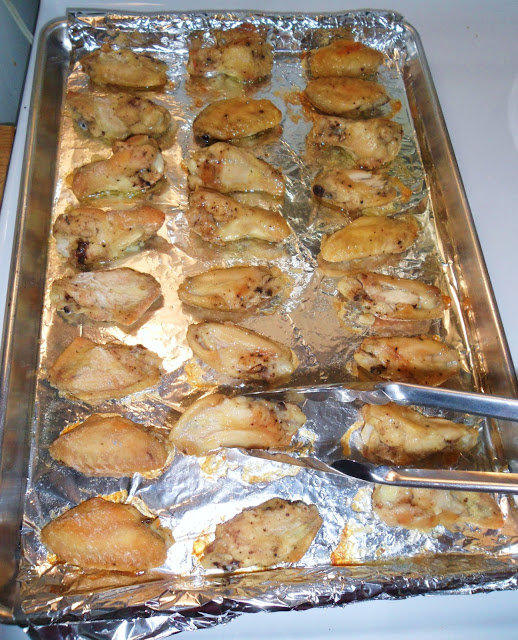 In a saucepan, add the marmalade, rice vinegar, hoisin, soy sauce, Sambal, garlic and ginger and bring to a boil. This will cook out the rawness of the garlic and let all of those flavours mingle and get to know each other. Give it a whisk every now and then. After five minutes, remove from the heat but continue to whisk from time to time until the wings are done. 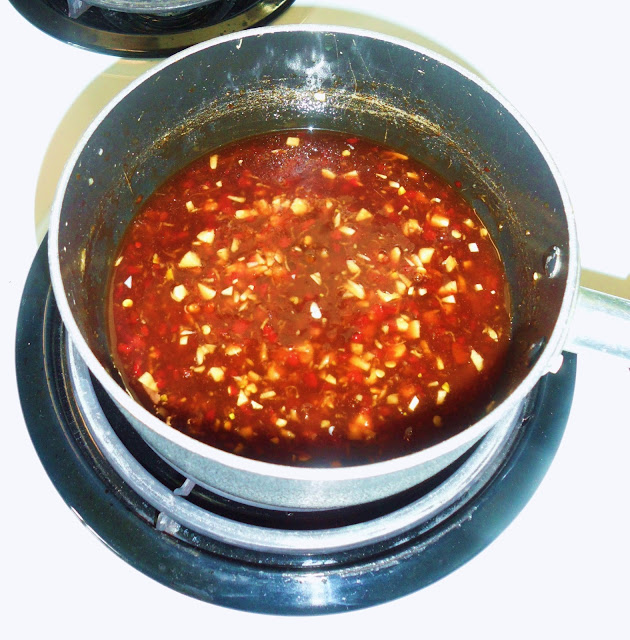 Now would be a good time to toast your sesame seeds. All you need to do is add them to a very dry pan over medium heat and keep them moving for 90 seconds to 2 minutes. That's all you need. You don't want to brown the seeds, just awaken the oil inside them to intensify the flavour. Remove from the pan and keep them aside.


Remove the wings from the oily tray as soon as they're out of the oven and place in a bowl. As you can see, they have a light, even, crispy coating just screaming for that sauce. 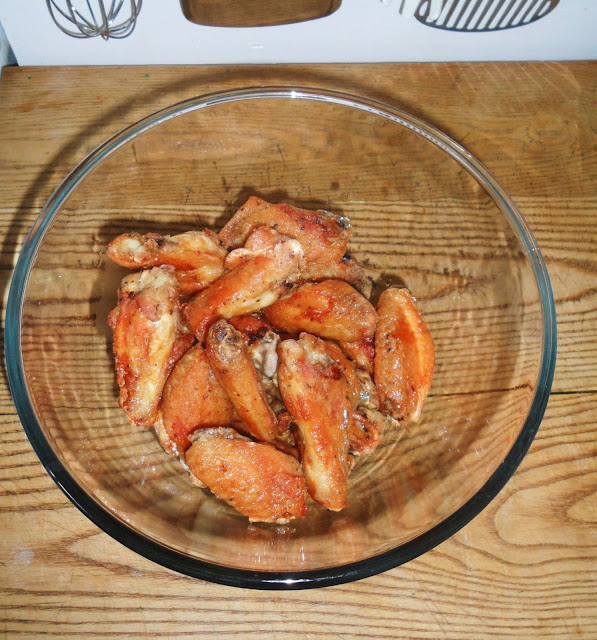 Pour 2/3 of the orange sauce over the wings and stir with a spatula until the wings are completely coated. Then add the rest of the sauce and give them another stir until everything is perfectly glazed. 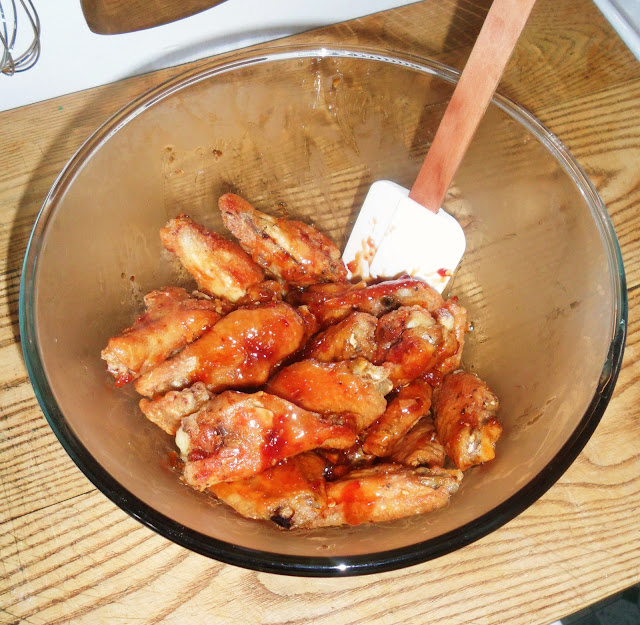 To finish, sprinkle the toasted sesame seeds over the wings and serve with carrot sticks, celery sticks and beer. 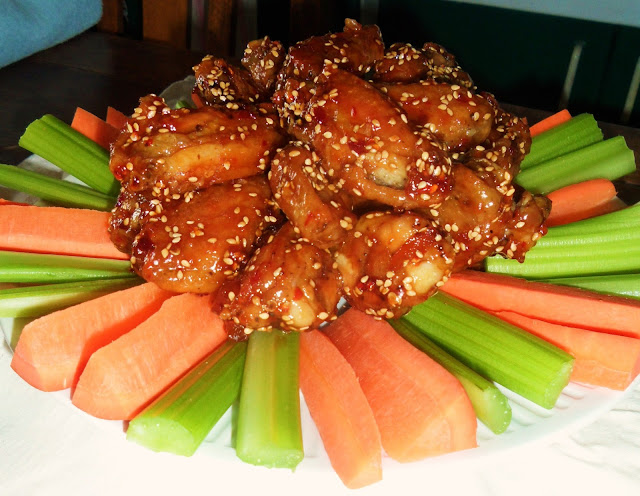 Come on! How could your friends not be impressed and salivating over these? They are sticky, spicy, sweet, crispy, saucy, moist and tangy all at the same time. Anybody can make these. No need to be missing the best parts of the game while you slave in the kitchen. With a little guiding, these wings practically make themselves.

To all the NFL fans, best of luck to you and may the best team win. Enjoy yourselves and drink responsibly. Give these wings a try. They'll be good for celebrating when your team wins or (dare I say it) comfort you if they lose.