I celebrated my birthday on January 21st. Just had to be on a Monday this year. I usually have a big party which always includes dining out somewhere special. This year, I didn't have a big party. I ended up amassing separate plans with all my little groups of friends which was really great, actually. This has meant a lot more fun dining experiences.

The weekend leading up to my birthday was full of great food. On Saturday I went to a great soul food restaurant here in Toronto called Harlem Underground. They have two locations in Toronto but we went to the one at 745 Queen Street West. I ordered fried chicken and waffles for my main course. I also had a side of creamy mac and cheese and collard greens (not pictured). It was scrumptious! Chicken and waffles may seem like a peculiar pairing but they actually predate the Civil War. Back in the days of slavery in the United States, most slaves ate only scraps left by their slave masters. This would often produce unusual pairings of food that eventually appealed to people. Nowadays, soul food can be enjoyed by anyone. It's southern comfort food with an added charm. The meal I ordered wasn't the healthiest option they had but thankfully collard greens are phenomenally good for your body and particularly the digestive system. So no guilt whatsoever. lol

Harlem Underground serves their chicken and waffles with brown gravy and a scotch bonnet pepper & cilantro syrup. I preferred the syrup. It was very delicious. They also offer dishes like jambalaya, catfish, jerk chicken, stews, short ribs, smoked ham hocks and even a Caribbean inspired pasta entrée. Check out their web-site to learn more. http://harlemrestaurant.com 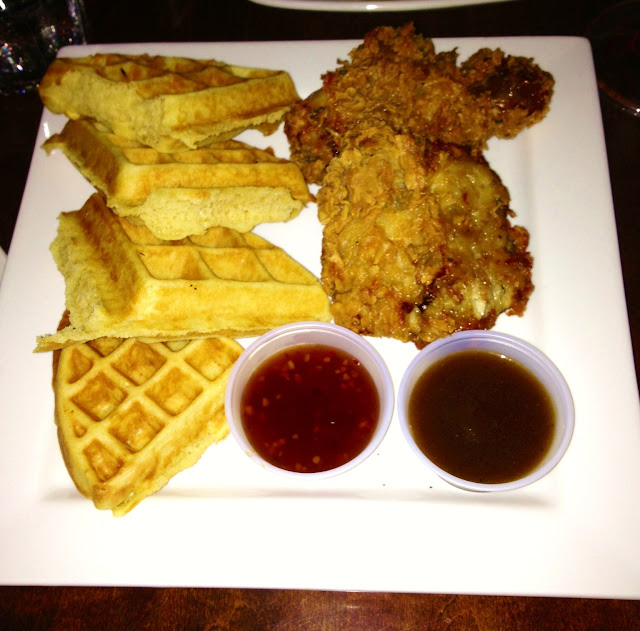 On Sunday a couple of friends and I went to the new Famoso Neapolitan Pizzeria at 386 Bloor Street West. They actually have a few locations across Canada so be sure to check out their web-site if you're in the country. Their technique is really quite interesting. They have a large wood-fired, domed oven with a computer that passes the pizzas through it mechanically. Each pizza takes only 90 seconds to cook!


Two of my good friends took me out and we shared a large salad and our own pizza each. My friends ordered a Siciliana (Oven-roasted Italian sausage, Italian ham, and baked prosciutto) and a Funghi Tartufo (Roasted white mushrooms, oyster mushrooms, white truffle oil, and Parmigiano Reggiano).


There were a few pizzas I was trying to decide on before my eye caught mention of a note on the menu that advertised that they could turn any one of their signature salads into a pizza by passing a round of pizza dough through the oven and topping it with a drizzle of olive oil, garlic, dried oregano and the salad on top. I thought that sounded very interesting so I chose their Famoso salad on a pizza. Their Famoso salad is an eclectic combination of romaine lettuce, prosciutto crisps, carrots, cherry tomatoes, soppressata (spicy salami), fire-roasted chicken, feta, and a dijon-balsamic vinaigrette. I was expecting a sparse sprinkling of these ingredients over the flatbread. Man, was I wrong! They piled a meal sized salad over top. Two servers brought it to our table saying excitedly that no one had ordered it before (at least while they were working). It caught many of the other patrons attention as it came over. It was really stupendous. I had to take two photos with my phone. One so I could show you the same bird's eye point of view as the first two pizzas and a second photo from the side so you could get an idea of how tall it was. It was definitely a meal fit for a birthday foodie. I couldn't even finish it in one sitting. 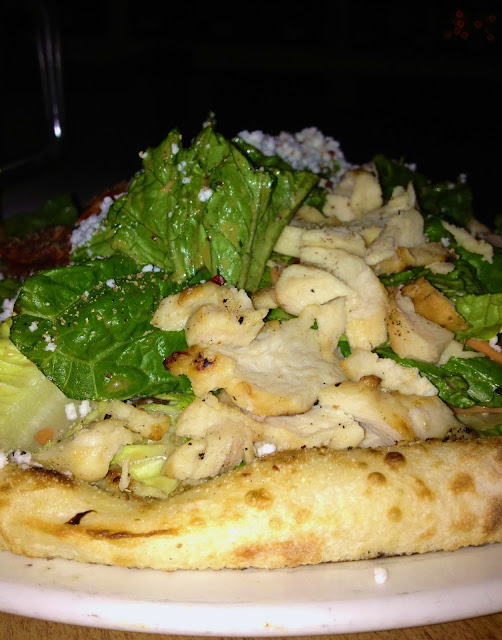 We also enjoyed a pitcher of their Italian Spritz cocktail on the rocks, a blend of Prosecco, Aperol and soda water. Aperol is a liqueur with the sweet and slightly bitter flavours of oranges.

You can learn more about the Famoso chain here: http://famoso.ca

Lastly, on the actual day of my birthday, my best friend took me to a Japanese restaurant called Blowfish. It is located precisely on the north-east corner of King & Bathurst (668 King Street West). Though they also have a second location on Bay Street. It was only  fitting that my bestie and I go for sushi as we are both fanatics of the stuff. Blowfish is one of the best sushi options Toronto has to offer. We sat at the intimate sushi bar and chatted with two chefs while they prepared our food right in front of us. It was a very cool experience. We didn't bother ordering anything from the menu. We just kept ordering what the chefs recommended until we couldn't eat anymore. All night we dined on an assortment of sashimi, nigiri and specialty rolls. Our first dish of the night was a cone. A cone on a sushi menu usually means ingredients wrapped in a sheet of dried seaweed (nori) to form a cone shape. Instead of seaweed, they used a sheet of edible paper made from rice and filled it with salad greens, cucumber, avocado, mango, seasoned rice, roe, sashimi, spicy mayo and crunchy bits of tempura. Literally every dish that was served to us was tremendous but those cones do stick out in my mind a bit.

I took several photos with my phone but the flash would have ruined them so I took the photos without. They turned out okay but there was purple tinted lighting where we were seated, the colouration of the pictures is a little bizarre. Just keep that in mind and trust that despite the photo quality this truly is food done very well.


The only thing that we ordered from a menu was the sake (which they have many variations to choose from). We tried a coconut-lemongrass sake. It was served cold and had a milky appearance. We both thought it was nice work. Sake on its own does have a sweetness to it but the tropical coconut paired really well with it. The exotic note of lemongrass at the end tells your brain that you're in Asia and ties in the rest of the other food so well. A symphony of well executed flavours and textures.

Speaking of execution, check this out. Our executive sushi chef was so well trained with knife handling skills, we watched him slice this radish into paper thin slices in under two seconds. I had never seen anything like it in real life before. I was very impressed. 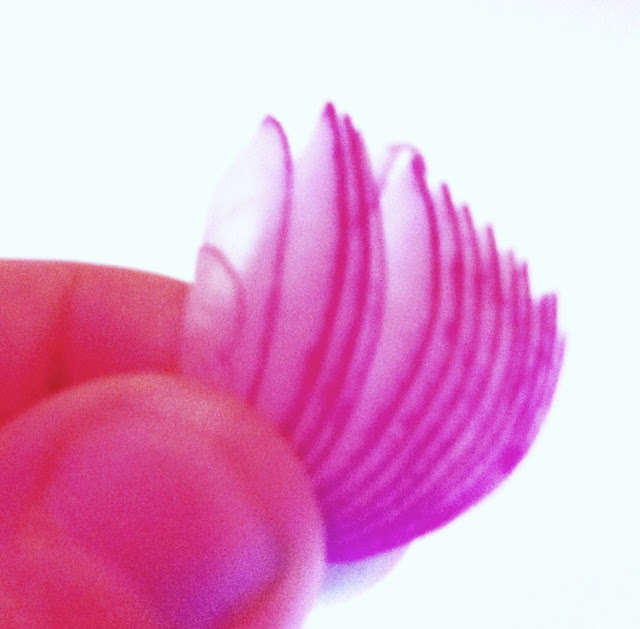 To see and learn more about Blowfish, you can visit the site here: http://blowfishrestaurant.com

Hope you all enjoyed. I certainly did! I'm looking forward to many more blog posts this year. This blog is not even a year old yet but I do enjoy putting it together. No signs of stopping yet.

B
Posted by BramLlewellyn at 17:53