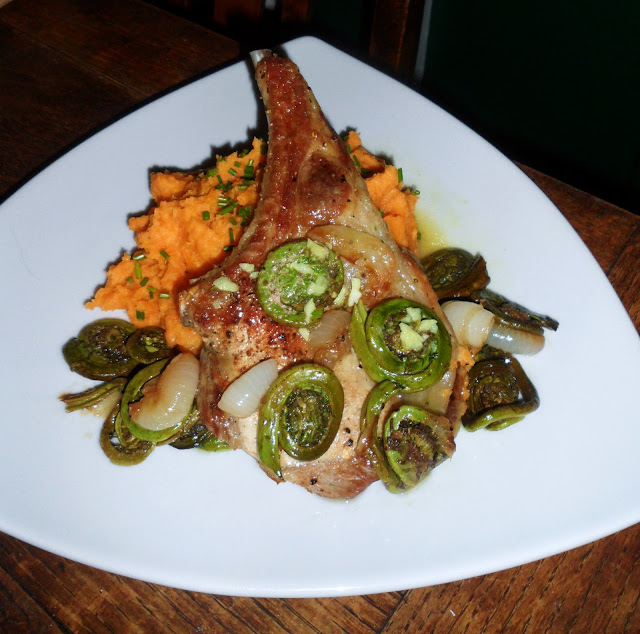 It is spring time and what better way to celebrate than with a simple yet savoury dish that uses some of the season's best produce. The two stars I am showcasing are pork chops and fiddleheads. Not just any pork chops though. I got my hands on some "Stone Age" Rib Roast chops cut from a cross between a Berkshire pig and a wild boar. Not to worry though, any regular pork chop will do just fine. If you're not familiar with fiddleheads, they are nothing more than young ferns that have not unfurled yet. They are harvested as a vegetable in spring (particularly in the North East area of North America). Not only are they a symbol of spring and new beginnings, but they are phenomenally good for you. Fiddleheads are a good source vitamins, omega-3 and omega-6 fatty acids, iron, fibre, potassium and antioxidants. Because they are harvested so young, they are cut very low to the ground. Which means they need a little extra love and care when washing because they have lots of nooks and crannies to trap dirt. Fresh and raw they look like this: 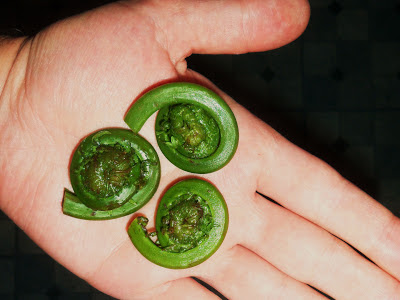 Fiddleheads have a firm, crisp texture and their flavour is a bit like broccoli stems, green beans, and asparagus. If you can't find them, you can substitute with any other vegetable you like. if you stick with an ingredient that's in season then you're bound to get the best flavour out of your meal at the lowest cost. You can prepare this recipe as is or serve it with the side dish of your choice, whether it be rice, pasta, potatoes, or even bread. In this example I made some creamy, mashed sweet potatoes and fresh chives (also a spring ingredient).

One last note before we get on with it, for the mustard part of the pan sauce you are going to need (obviously) mustard. I used a fantastic tarragon mustard which worked really well with this dish. It also made the sauce a beautiful spring green colour. If you don't have tarragon mustard, just use any dijon mustard of your choice. The colour may not be the same but it will still be tremendous. Just don't use the yellow, hot dog mustard stuff. Please and thanks.

4 pork chops (bone-in rib roast preferably)
1 1/2 cups of fiddleheads, washed and trimmed
3/4 cup of Cipollini onions, halved
1 clove of garlic, minced into a coarse paste (adding a pinch of sea salt will provide abrasion and assist with this)
1 1/2 cups of white wine
1 tbsp of tarragon mustard
1 knob of unsalted butter
2 tbsp of oil, for frying
Salt & Pepper to taste

Get yourself some nice pork chops, one per serving. Season both sides generously with salt and pepper. 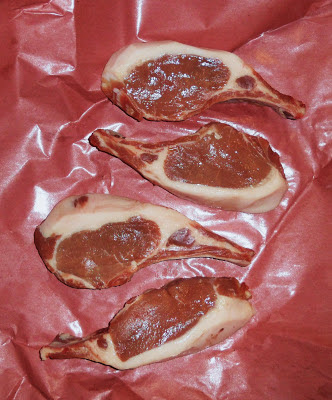 Warm a heavy skillet over medium high heat. Your skillet must have a metal or oven-proof handle because the chops are only being seared and then finished in the oven. Add 2 tbsp of oil and then place the chops in. You should hear a sizzle when the meat touches the pan (if not, your pan isn't hot enough). Sear the chops for a couple of minutes on each side or until they are browned nicely. If you are doubling this recipe, sear your chops in batches so that you do not crowd the pan. Otherwise the pork will steam instead of sear. We don't want that. 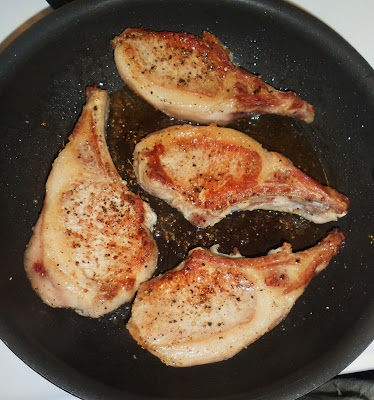 Remove the chops from the pan and add the onions. Toss them around in the pan to bring out their sweetness and give them a head start from the fiddleads. Fry for 1 or 2 minutes. 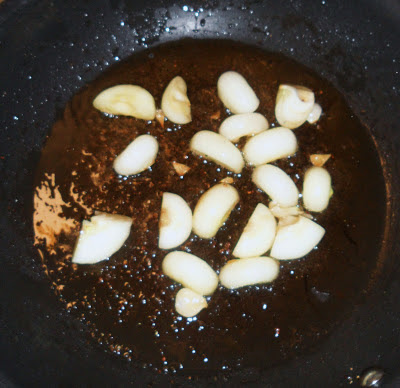 Add the pork chops back into the skillet. Then evenly scatter over the fiddleheads. Season with salt and pepper (you only really season the veg here). Then place in your preheated oven where it will cook for 20-25 minutes. 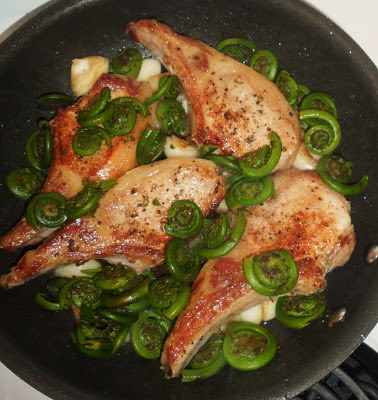 When the chops are done, remove them from the skillet and set aside to rest. Remove the fiddleheads and onions and set aside as well. The meat will rest for the amount of time it will take to make the pan sauce (about 5 minutes). If you're worried about the veg cooling off, just loosely cover with aluminum foil.

There will be excess fat and juices in the skillet. We don't want that in our sauce. Using a pair of tongs and a wadded piece of paper towel, mop up most of the liquid from the pan (Careful, the handle will be hot!). Leave about a tablespoon of fat in the pan. Place over medium-high heat. Add the garlic and tarragon mustard. Stir in the hot pan for about a minute. 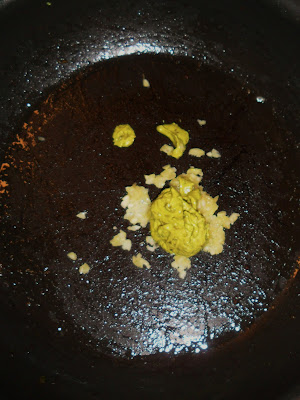 Deglaze the pan with the white wine. There will be a "fond" in the pan (dark, crispy residue) from the pork chops and that stuff is concentrated with tasty goodness. The wine will clean all that off the skillet and infuse itself with the flavour. At this point you can crank the heat up as high as you want. Not only do you want to burn off the alcohol in the wine (which will take less than a minute) you want to reduce the sauce by about half or until it is at the desired thickness and consistency. 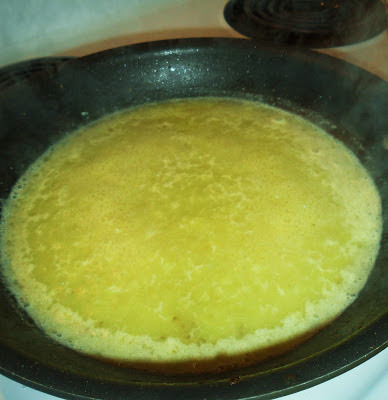 When the sauce has reduced, remove from the heat and toss in the knob of butter. Stir to melt and you will be left with a very luxurious and tasty sauce. 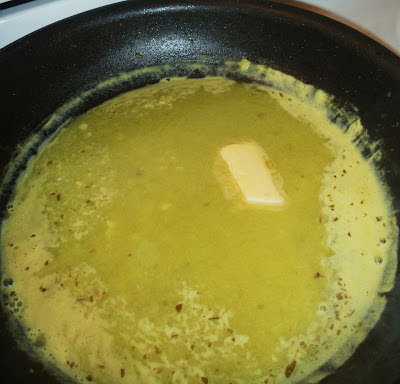 Serve your pork chop with the side of your choice. Scatter some of the fiddleheads and Cipollini onions over and around the chops and spoon over your pan sauce. Serve immediately and enjoy this savoury taste of Spring. 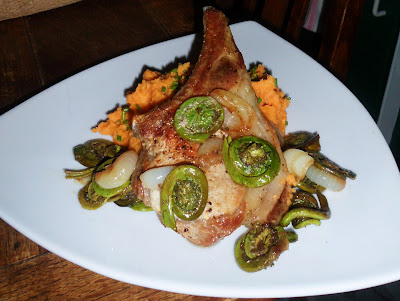 Alright, I have a confession. I tweaked this recipe to better suit you, but when I made this I used 2 cups of wine for the sauce. Even after letting it reduce by half it was still a little too thin. You can barely see it in the photo. In fact, it looks like I just added garlic and a spoonful of green water in the first photo. It's a shame, especially since it was such a great colour. You can avoid that by reducing the amount of wine to 1 1/2 cups.

That's it! I hope you enjoyed this recipe. Stay tuned for a sweet and aromatic dessert using one of my favourite Spring produce, It will blow you away...