Hey everyone. I just got back from a visit with my aunt and uncle. They live in the country about an hour and a half away from the city. If you don't follow the blog, some family and friends and I get together twice a year for a mystery ingredient challenge. My aunt and I are the cooks and everyone else chooses an ingredient for us to use in at least one of three courses: an appetizer, main and dessert. This time we were given nine ingredients and ten minutes to come up with what courses to prepare. As always, it was a lot of fun and my aunt and I produced some very tasty dishes.

Clearly this list is screaming for some Asian inspired dishes. The portobello mushrooms and the tequila were the big curve ball items in my mind. We made it work with the exception of one detail. Rhubarb season is mostly over and we weren't able to find any. So my cousin's fiancé, Steve, changed his ingredient to mango instead. This worked out well because we had planned on making a chutney with it anyway. 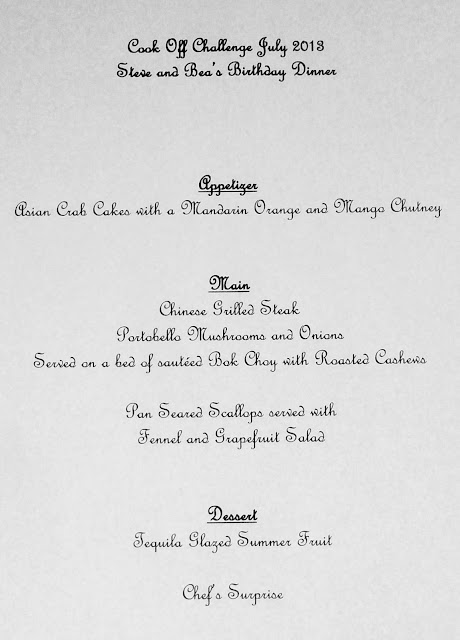 My aunt had seen a recipe for fruit tossed in tequila with sugar and lime juice. We decided to try that. To say the least, a few people weren't impressed with a simple fruit salad for dessert. After all, the whole point is to cook something impressive. So we made a vanilla custard tart with fresh raspberries as a surprise. 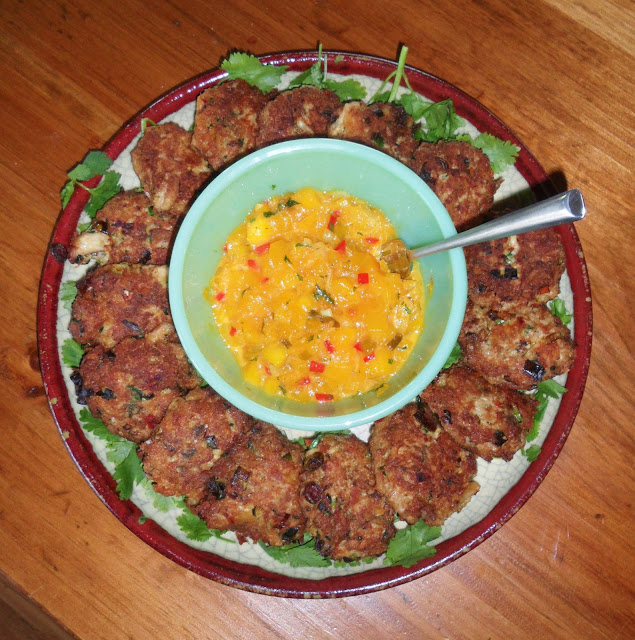 For the app we decided on Asian crab cakes and chutney. Oh man these were good! Fresh crab wasn't an available option but we did manage to get some decent crab meat at a supermarket. We mixed in some chopped scallions, red chili, garlic, fennel fronds, panko bread crumbs, two eggs, lime zest, cilantro, soy sauce and a touch of sesame oil. For the chutney we threw together some mandarin orange, mango, red chili, and scallion. Then we dressed them with some rice vinegar, lime juice, sesame oil and sugar. We cooked it down for about seven minutes until we had a jammy but still chunky consistency. We mixed in a little fresh cilantro before serving. The cakes and the chutney together were amazing. To be honest, this was my first time making crab cakes. We were very pleased with how they came out.

My aunt also whipped up some lime margaritas (further use of the tequila ingredient) and served them alongside our crab cakes and chutney. 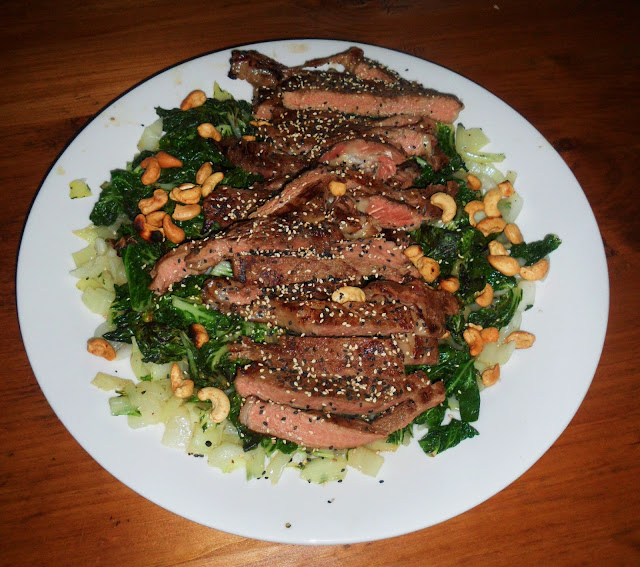 We made two dishes as the main on platters served family style. The first was rib-eye steak marinated in Chinese flavours. I personally barbecued the steaks and  then sprinkled some black and white sesame seeds over them. We sliced the steaks into strips and then served them with mildly spiced cashews and sautéed bok choy.

We bought two bone-in rib eye steaks. Cooking any meat on the bone brings out so much more flavour. For the marinade we used soy sauce, rice vinegar, water, sesame oil and sugar with minced garlic, chopped chili and grated ginger. After the steaks were removed from the marinade we boiled it down to thicken it up and served on the side as a sauce. 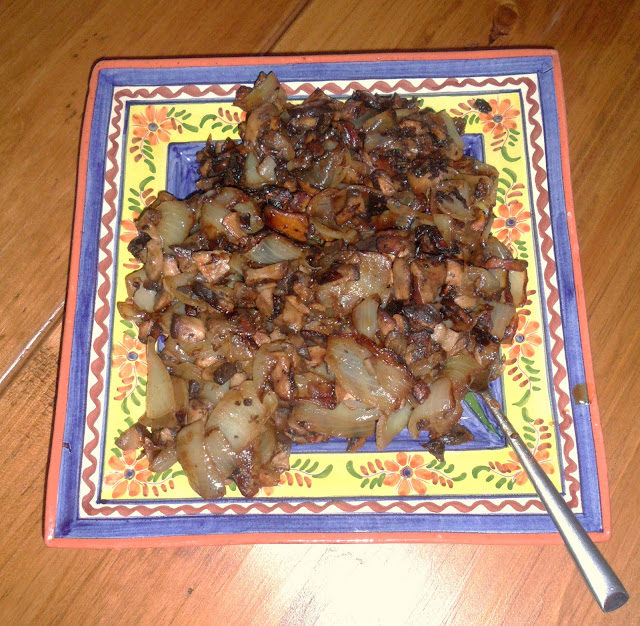 To accompany the steak dish and incorporate the portobello mushroom ingredient, we sautéed the mushrooms and cooked them down with onions for several minutes for a deep, meaty, charred flavour. 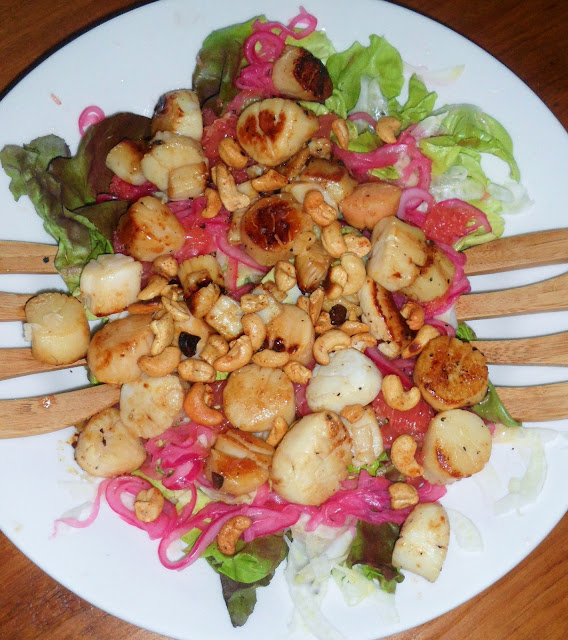 For our second main we chose scallops over a fresh salad. We thinly sliced some red onion and pickled it in lemon juice all afternoon. We tossed the pickled onion with wafer-thin slices of fennel, red grapefruit and Boston lettuce. For the dressing we used the pink lemon juice from the onions and mixed it with white wine vinegar, olive oil and a touch of sesame oil. We sprinkled the same spicy, roasted cashews as well. My aunt seared the scallops while I cooked the steaks outside on the barbecue. The two dishes together made up an Asian inspired surf and turf. 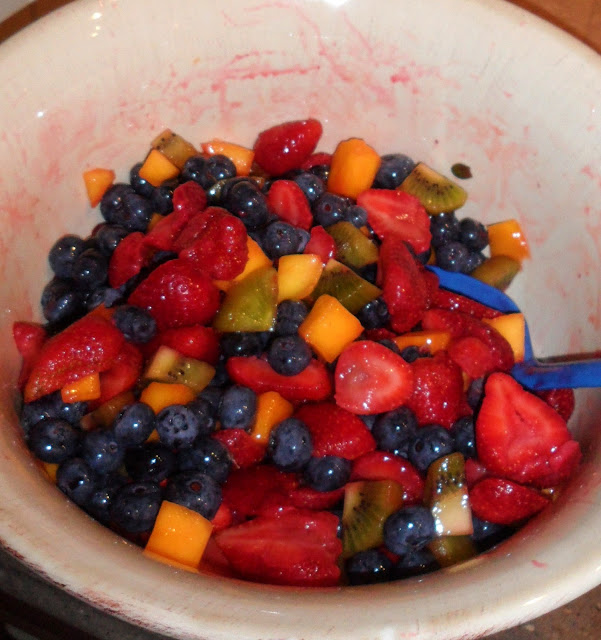 The fruit salad was simply strawberries, blueberries, mango and kiwi tossed in a glaze made of 2 parts tequila, 1 part sugar and some fresh lime juice. We boiled the liquid to a thin syrup and allowed it to cool before adding to the fruit. It was very nice. 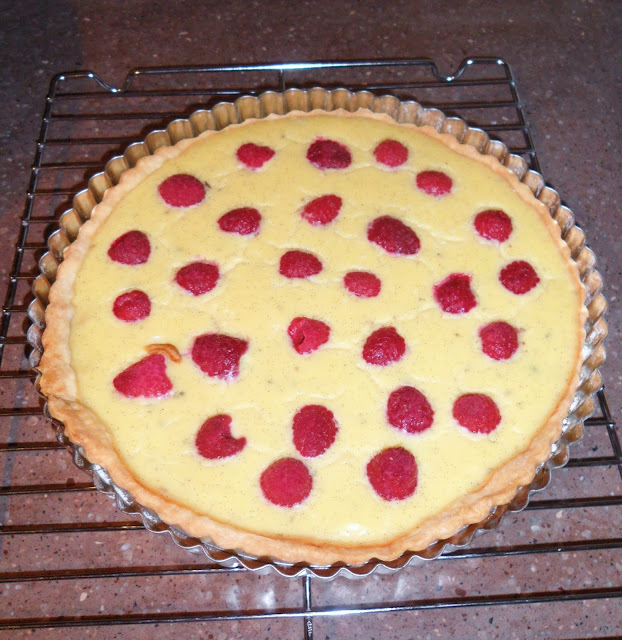 Our special custard tart surprise was also a winner. We used a whole vanilla bean in the custard. We made a simple pastry for the crust by cutting cold butter into flour with a little sugar and a pinch of salt. Then we formed it into a dough by adding just enough ice water little by little. We blind baked the crust until it just started to turn golden. Then we poured in the vanilla custard and dropped a few fresh raspberries on top. Then it baked again until the custard set.

We were stuffed by the end of the night! We all had a great time. All the dishes came together really well and every one raved about it. We all agreed that this edition of the challenge was even more of a success than our last one in February.

Hope you enjoyed this post. I'll be back soon with some delicious recipes for you to try.

Hope everyone had a nice weekend,