Winterlicious is just wrapping up here in Toronto. Twice a year there is a two week festival where a few hundred restaurants offer a multi course prix fixe menu at a lowered standard price. It gives more people the opportunity to enjoy some of the finer dining that the city has to offer. I think it's a great event and I make a point to take advantage every time. I mentioned it happens twice a year. There are Winterlicious and Summerlicious.

I rounded up a few friends and managed to try two restaurants this time around. The first one was Bloom located in the Bloor West Village near High Park. It's a quaint, narrow restaurant that serves a combination of Spanish and Latin dishes. I made plans with two of my friends and picked a few options for them to choose from. Bloom was the victor. The two friends that I asked are Emma and Alon. We have been friends for several years now. Not long ago Alon and Emma were featured on an episode of Food Truck Face-Off, a program on Food Network where business hopefuls compete for a chance to make their own food truck dream come true. Guess what, they won! The Fit To Grill food truck will be available in the Toronto area in the near future. You can check out their twitter @FitToGrill and they have a Facebook page as well. Here is a photo of Emma & Alon. It's funny, years ago when we were getting into trouble we had no idea that we would all end up on cooking related reality shows. lol 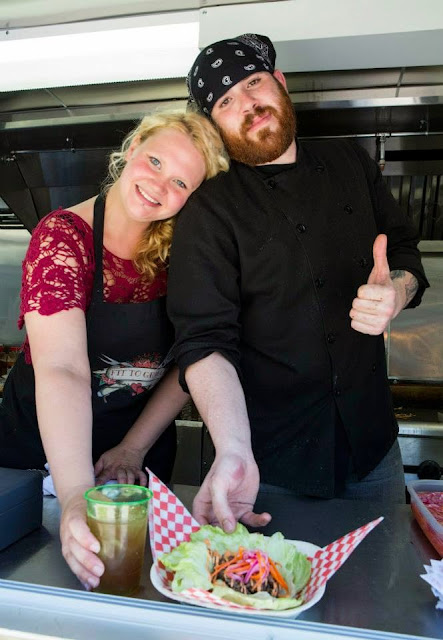 We all ended up choosing different courses so I get to share a lot of these with you. 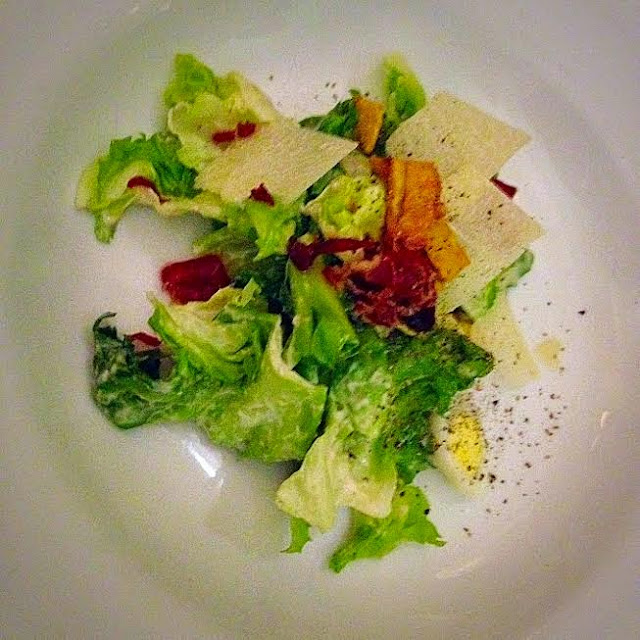 Alon's app: The Chicken Croquettes with Tomatillo Marmalade and Kale 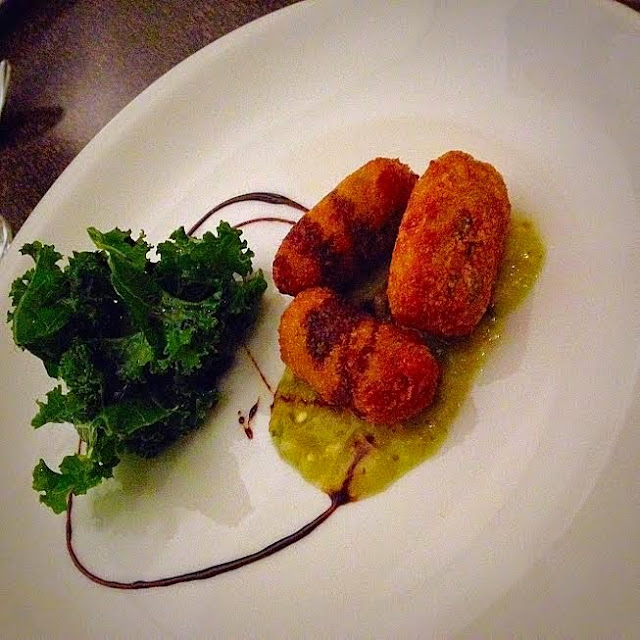 My app: The Beet Carpaccio with Watercress and Manchego. This was really tasty and beautiful. My  favourite part was the creamy carrot dressing because of its sweet tanginess. It really brightened up the earthy beets, salty cheese and peppery watercress. 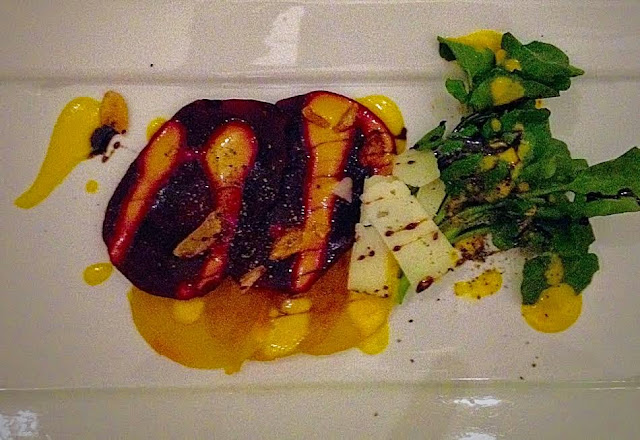 Emma's main: The Chorizo-Stuffed Chicken with Plantain and Veggies 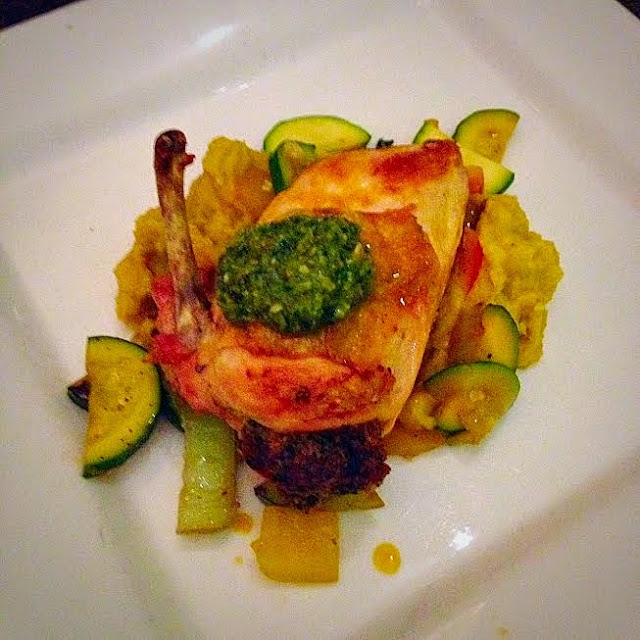 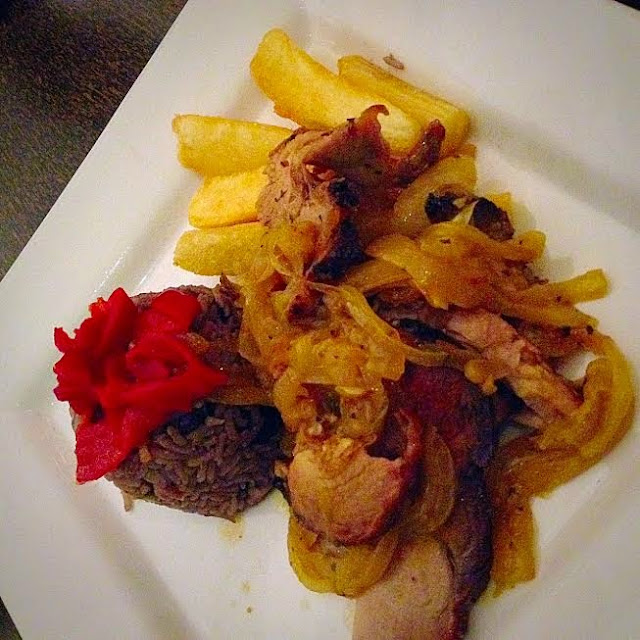 My main: The Seafood Paella. This was so good! The menu only mentioned the seafood part but there was chorizo sausage in it as well. Chorizo goes really well with seafood and particularly in paella. I was very happy about that. The rice was dyed with black squid ink which gave it a more dramatic presentation. Every bite was savoury and delicious. I've only made paella twice before but for something I don't eat often I enjoy it very much. I might just have to do a proper paella recipe this year. 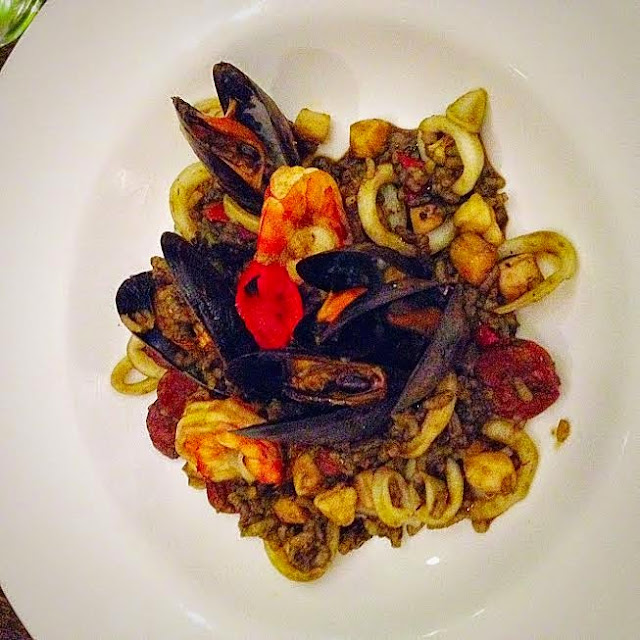 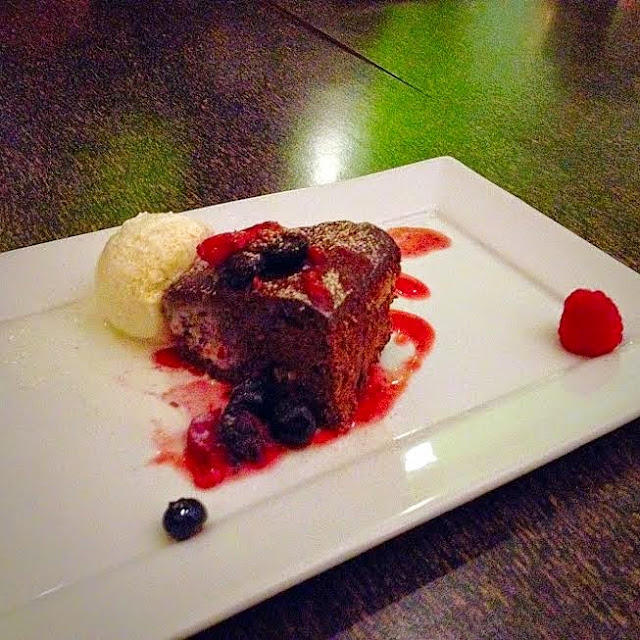 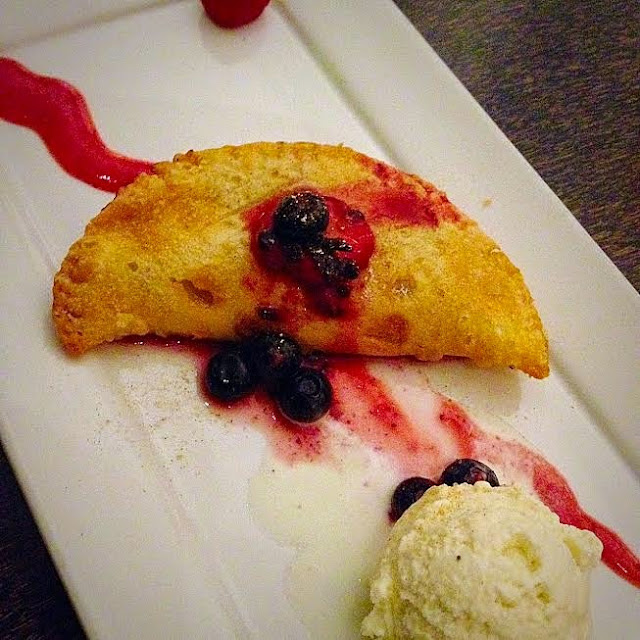 My dessert: The Guava Bread Pudding. It was advertised with toasted walnuts, but none could be found on my plate. Aside from that, very tasty. The spongy bread pudding was layered with juicy slices of guava accompanied by a mixed berry compote. Personally I really loved the portion size. I don't have much of a sweet tooth but I'll usually enjoy a few bites of something if it's available. The dessert was just big enough that I could finish it and be totally satisfied. It was perfect for me. 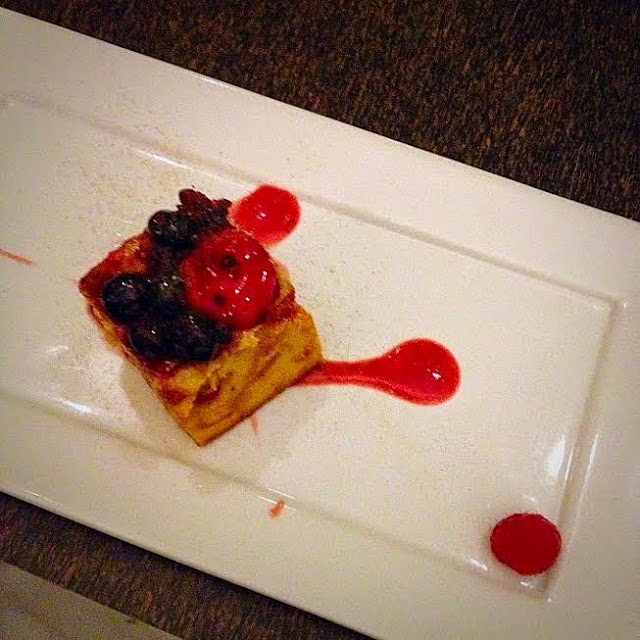 Overall I really enjoyed this place. In fact, all of us did. My dessert didn't have any walnuts and there was a bit of wait before we got to put in our order but aside from that everything was lovely. The staff was very friendly and personable. The food, ambiance and plating are all very good. I would definitely come back here again. My only other complaint I can't even fault the restaurant for. We had the "pleasure" of sitting next to a grown up daughter and mother duo who were (among other things) loud, high maintenance and impossible to please. Although they were giving off nothing but negative energy during dinner, they did provide some humour (at their expense) after Emma, Alon and I left. I honestly believe the restaurant did their best to satisfy them. Some people just can't be helped. If you're not a fire breathing dragon I'm sure you would love this place.

Bloom is located at 2315 Bloor Street West in Toronto, ON. The nearest intersection is Bloor and Windermere and it's approximately the same walking distance between either Jane or Runnymede subway stations.


The second restaurant that I went to is one that I have been meaning to try for a long time. When I found out it was participating in Winterlicious I made my reservation as soon as I could; Toronto's Momofuku Daisho. Momofuku (which means lucky peach) is a group of restaurants owned by one of my favourite renowned chefs, David Chang. Altogether there are locations in New York City, Toronto and Sydney. The Toronto location is particularly awe inspiring because it's a large, glass cube in the middle of the Financial District which compromises three floors. The main floor is the Momofuku Noodle Bar, the second floor is the Momofuku milk bar (for those with a sweet tooth) and then the more refined dining experience is found on the third floor, Momofuku Daisho. There is an Asian element to most of the dishes but it borrows from many of the other of the diverse cuisines that make up Toronto as well. Their menu also reflects what's in season and available from local markets, which is fantastic. I'm so glad that I finally got to eat here! I was accompanied by my good friend, Michelle. I can't wait to go back.


Momofuku Daisho offered a lunch and dinner menu for Winterlicious. Since we went for dinner, these were our options for $45:

Before we received our appetizers we were served a refreshing and summery kimchi shrimp and lobster amuse-bouche. It was a delicious little start off to dinner. 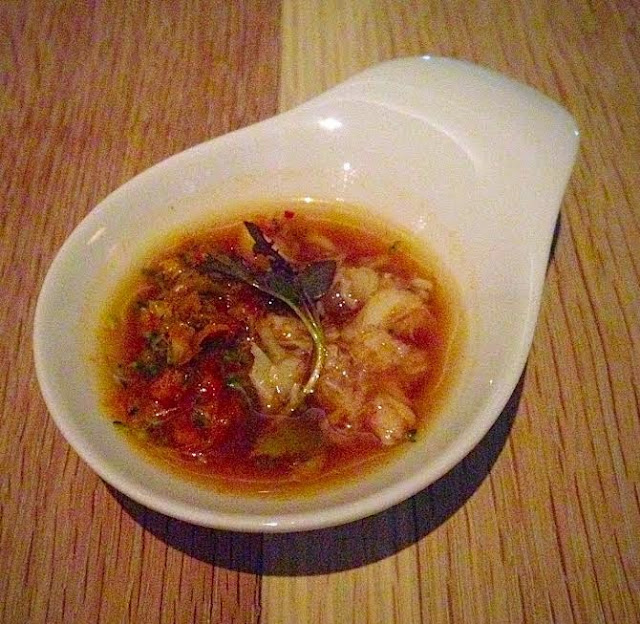 For our appetizers, Michelle ordered the Squash salad. She let me have a bite and it was really tasty. We both love squash. 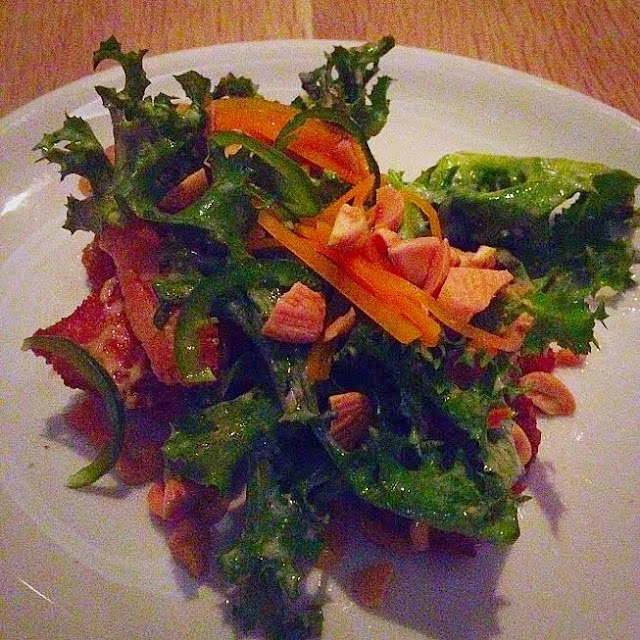 For my appetizer I chose the steamed buns. One was a crispy chicken variety and the other was beef tongue. Battered and fried chicken is one of my all-time favourite things to eat. You just can't go wrong. I was a little apprehensive about the beef tongue because I had tried it once before and I wasn't a big fan but this was really delicious and cooked proper. They were so good. 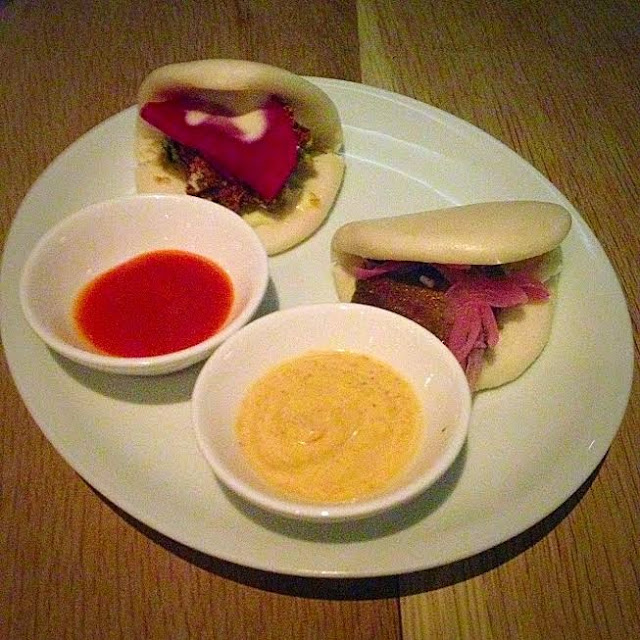 For our mains, Michelle ordered the haddock which came with a cabbage and sweet potato rösti and a creamy, yogurt sauce. Michelle was kind enough to let me have a bite of this and it was really nice. The only thing I don't quite understand is they advertise the haddock as roasted, but it was clearly fried. 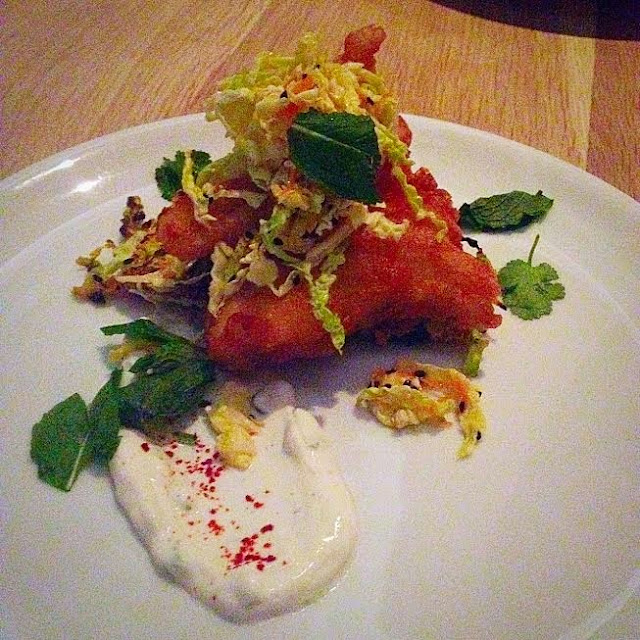 I ordered the braised pork shank with Chinese sausage, turnip, black garlic and cilantro. It was really delicious. Tender, falling apart meat in a complex sweet-n-savoury sauce. The Chinese sausage meat was ground and fried until very crispy so they added a very interesting dynamic. My only criticism is that I felt like it could have used an extra element of starch, but that could just be a personal taste. To me, a beautiful, stewy sauce is best enjoyed with rice, grains or bread. Not to say that eating the sauce with a spoon wasn't a joy, but for a main I thought it could have used a little more substance. Very tasty though. I've said it before and I'll say it again" I'm an absolute fool for a good braise. 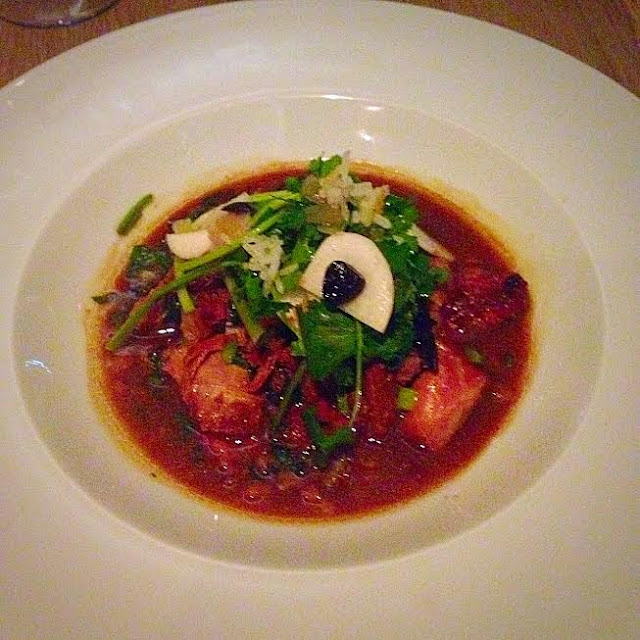 Before we received the dessert course that we ordered we were served a complimentary amuse-bouche of pineapple and coconut sorbet with a dehydrated pineapple chip. These were gorgeous. When the server described them we were both anticipating a piña colada flavour but there was an extra tartness that we weren't expecting. Kinda like sour candy. Yum! 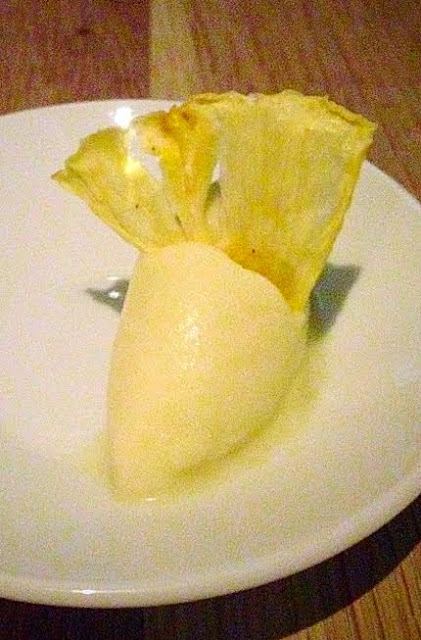 Michelle ordered the chocolate dessert. She really enjoyed it and I enjoyed the bite she let me have. 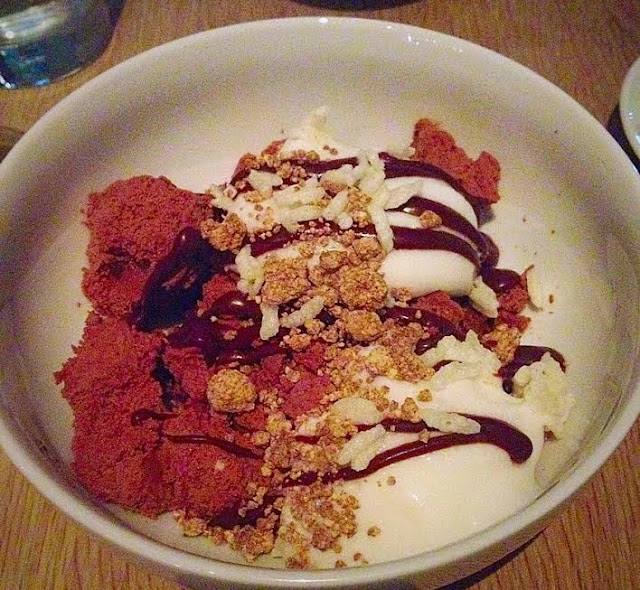 I opted for the date pudding. It was scented with Chinese 5 spice and came with a warm, sticky butterscotch sauce, crushed walnuts and a quenelle of clotted cream. It was out of this world. I had to take the photo quick before the warm, dense cake melted the cream. Again, I'm not a big dessert person but this was stupendous. 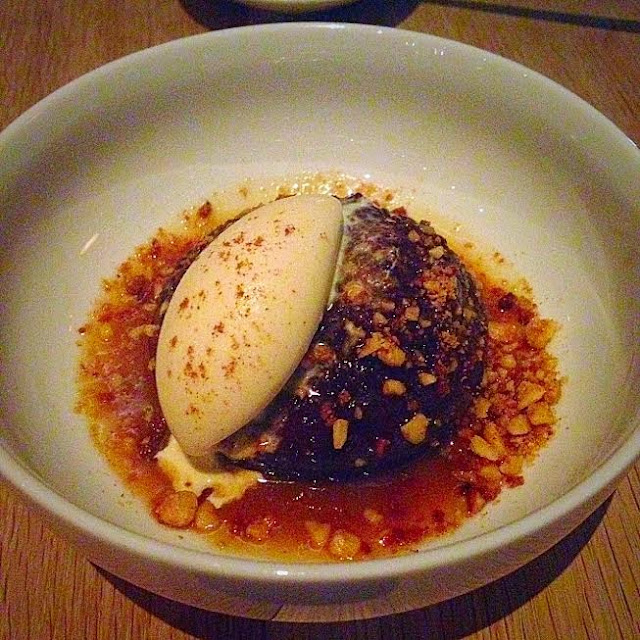 I most definitely encourage anybody who has the chance to dine at a Momofuku restaurant. Very conceptual food that tastes delicious and looks beautiful. Michelle and I shared everything so we each got a taste of all eight courses. Everything was cooked to perfection.


Momofuku Toronto is located at 190 University Ave in Toronto, ON. The nearest intersection is University and Richmond and it's approximately the same walking distance between either Osgoode or St Andrew subway stations.

So aside from a couple of advertising blunders from both places, myself and some friends got to enjoy a couple of really fantastic Toronto restaurants. I will definitely go back to both and recommend them to others. I love Winter and Summerlicious. It will be another six months or so before I'll be able to share my Summerlicious experiences. Last year I only managed to eat at one restaurant. I'm hoping that I'll be able to sample from at least a couple more restaurants this summer. I'm already looking forward to that.

Also, I am heading to Chicago for a few days in June of this year so I'll be creating a post about my visit and some of the different food I will get to try while I'm there. More exciting dining out experiences to come!

B
Posted by BramLlewellyn at 14:49