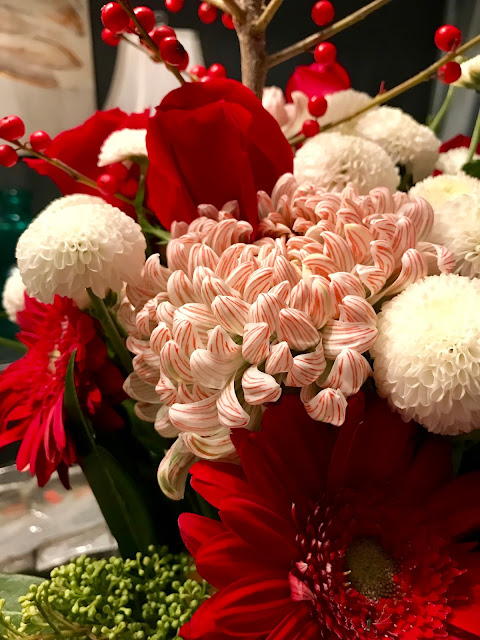 I hope everybody has had a happy and festive holiday season. This year Christmas plans were quite different for me. I usually celebrate Christmas with my aunt, uncle, cousin and her husband. He's a guy from London, England and his family came from across the pond to have Christmas with us a couple of years back. This year it was the Canadian in-laws turn to go to the UK for Christmas. So I had to make alternate arrangements for the holidays. On a personal note, this year I have been learning Brazilian Portuguese (as well as Spanish). I have met a lot of Brazilian ex-pats in Toronto that have become good friends of mine. They invited me to spend Christmas with them and I gladly accepted.

In Brazil, they traditionally do the big dinner and exchange gifts on the 24th of December. So we did that and enjoyed a Brazilian Christmas dinner then. Since the 25th of December is my traditional Christmas Day, they let me prepare dinner that day. It was a lot of fun. I got to try some new and exciting things and I couldn't help but share them here.

Here is a picture of the roast turkey that was cooked with herbs, spices, peppers and onions. It was warm, inviting and everything turkey needs to be. They made a rich gravy sauce from scratch which is also pictured in the red bowl in the background. I wasn't expecting turkey to be a traditional Brazilian Christmas dinner since it's more of a British influence and Brazil's colonial past is mostly Portuguese. Consider it something I learned this year! 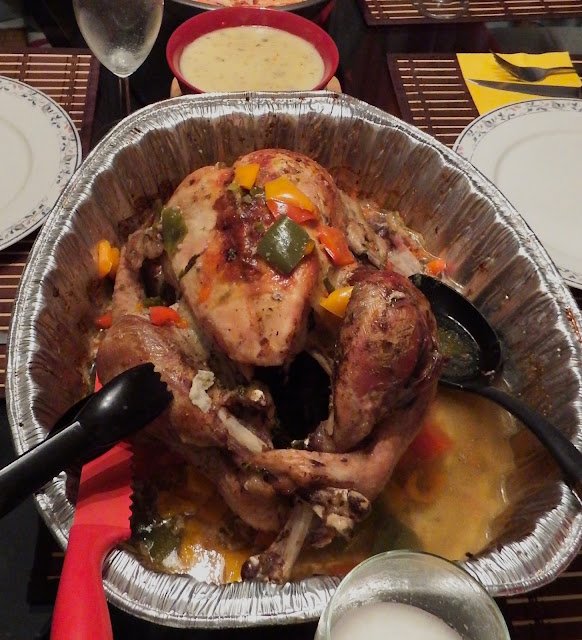 Beans and rice, of course, standard and familiar.

In the following picture, you can see farofa at the top and empadão at the bottom. Farofa is essentially onions, garlic and meat sautéed in some kind of fat (in this case, butter) until it's nice, golden and aromatic and then they dump in a coarsely ground cassava flour. For those who may not be familiar, cassava is a root vegetable native to warmer countries of the world. The flour soaks up some of the fat and flavour from the meat, garlic and onions but enough is added so that overall the texture is still drier than mushy. It kind of looks like sand, but I can assure you it tastes much better. My Brazilian friends have made farofa for me more than once. It seems you can use any kind of meat you want: bacon, sausages, chicken, offal, etc... In this batch they used chicken hearts (a delicacy in Brazilian cuisine) and chicken livers. Admittedly, the first time I tried chicken hearts several years ago I wasn't blown away by them. But my Brazilian friends have made them for me earlier this year and I have since changed my opinion. They're actually quite good. They have more of a familiar chicken flavour than liver and the texture is more... I'm not sure, "sweetbready" which I also like. Farofa can be a bit of a hard sell visually and descriptively, depending on who you are, but it's quite good. It tastes like meat, onion, garlic and root vegetable and has a crumbly texture. It's great at sopping up sauce and other juices on your plate!

Empadão is much easier to explain. It is essentially a meat and veggie pie. You can make empadão with any kind of meat or seafood but in this case they used chicken. They cooked the chicken in a pressure cooker and mixed it with tomato sauce, spices, seasonings, onion, scallions, garlic, corn and green olives. You can put anything you like in it, really. It's cooked in a casing of pastry made with flour, butter (any solid, cold fat can be used), a bit of water and salt. An egg wash was brushed over the top for colour. The whole thing is baked in a casserole dish. Think of it as South American chicken pie. 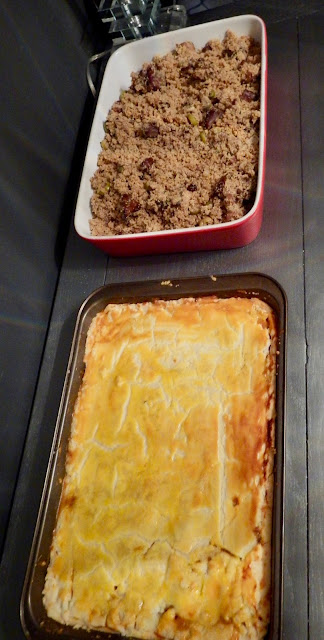 They also made salpicão, which essentially is a chicken salad. Don't be fooled by the word "salad", this is not a light or healthy dish. lol. Generally speaking salpicão is a combination of pressure cooked chicken, sliced ham, carrots, potato chip matchsticks, mayonnaise and seasonings. My friends like to add cheese and green olives. Some people add diced green apple and/or raisins to it. Made fresh it's usually eaten as a side dish. It's interesting and quite unlike any combination that I grew up with. I have to say though, I much prefer it the next day, especially in a sandwich. After a day's time the textures and flavours kind of get to know each other and meld into one, although the carrots always stay crunchy. It's yummy. 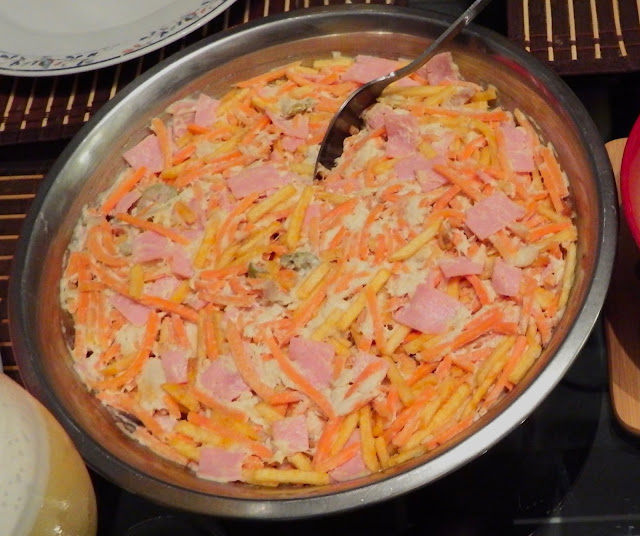 That was pretty much our Brazilian Christmas dinner in a nutshell! Here is a photo of my plate: 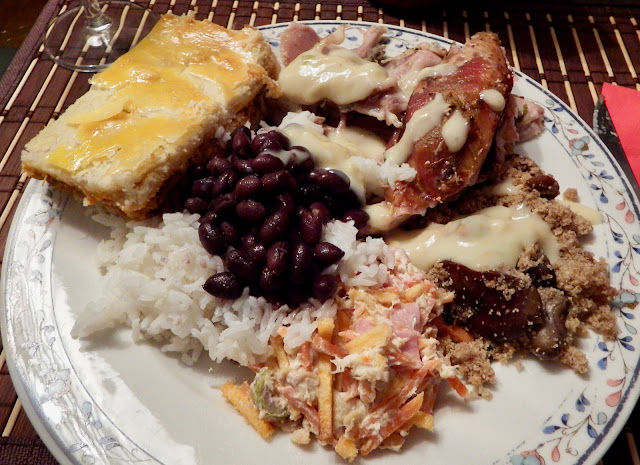 Yes, it was very heavy and very filling, but come on, it was Christmas!

The next day, on the 25th, I was in charge of dinner. We didn't see the point in having two Christmas turkeys in a row so we went with the second most popular option, ham. The main dish in my Christmas meal was baked ham with an apple butter-mustard glaze. It's actually the exact same glaze that I used in a recent butternut squash recipe on the blog, only I omitted the sage. It worked so well and everybody loved it. 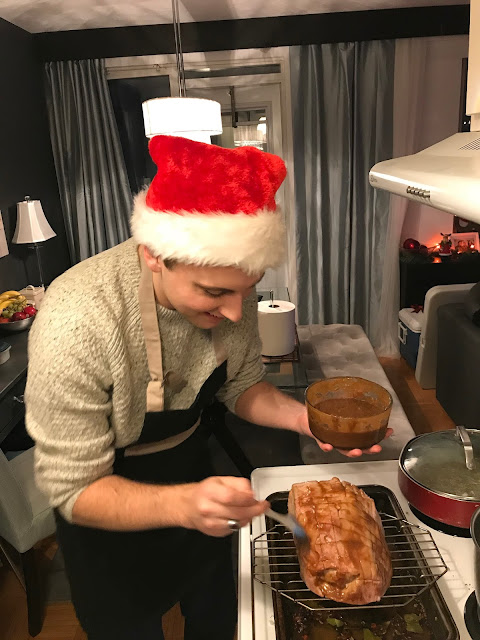 Our ham was about 4.5 lbs. I scored and baked it at 325 F/163 C for a total of about 80 minutes. Brushing it with a thin layer of glaze at 20 minute intervals. I also baked the ham over a wire rack above a combination of apple juice and water with cloves, star anise, a couple of cinnamon sticks, fennel seeds, cloves, peppercorns, allspice berries, bay leaves and a dried chipotle pepper. As it bakes these flavours are carried by steam that flavour the ham as it cooks. After the 80 minutes were up, I let it sear for a few minutes under the broiler to get a nice caramelization effect. 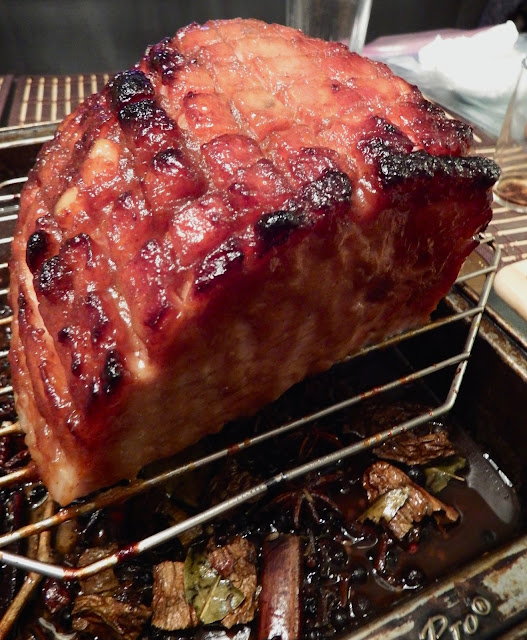 I covered the ham with aluminum foil while I cooked the rest of the side dishes. When it was time to serve, we sliced up the ham in tasty, juicy portions. 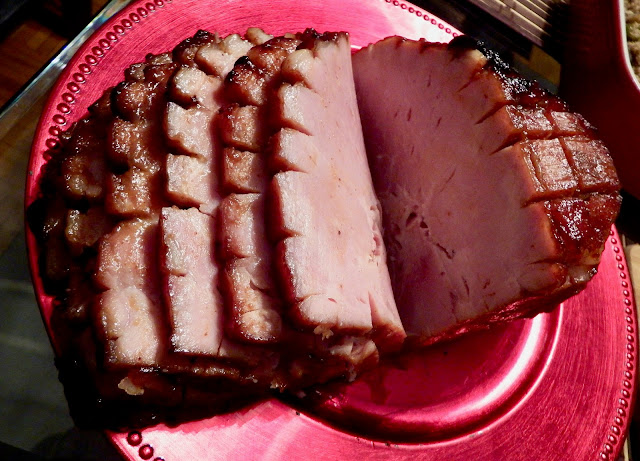 The side dishes had more of a Southern country influence. I made a batter for buttermilk cornbread and cooked it in a greased bundt pan. We sliced it up and ate it with butter and honey. 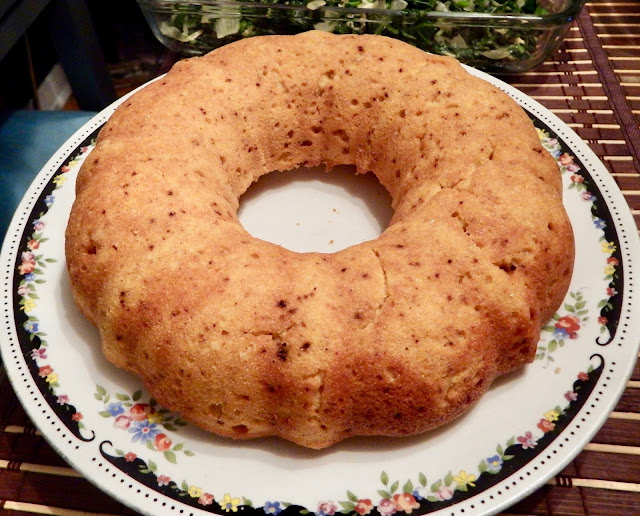 I also made some glazed heirloom carrots that I peeled, sliced and parboiled before sautéing in butter, brown sugar and fresh thyme. I meant to add a splash of orange juice, but unfortunately I forgot. Oh well, they were still quite tasty without it. I topped the carrots with toasted walnut pieces and fresh pomegranate arils. They were delicious. 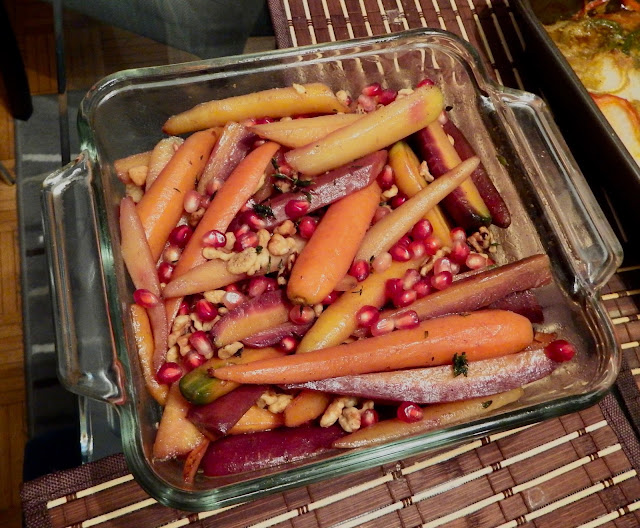 Finally, and mostly for colour and ease of digestion, I made collard greens. The same usual way I make collard greens by sautéing with onion and garlic until just wilted. I usually add chili peppers when cooking for myself but not everybody present had the same appreciation for spice that I do so it was omitted. Collard greens are a very popular dish in southern country cooking so it was the perfect accompaniment to our meal. 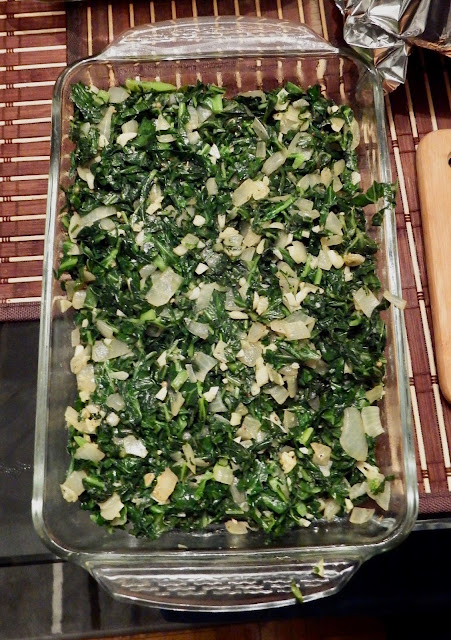 That's it. I kept it simpler and a bit lighter than the meal we had the previous night. In fact, there were plenty of leftovers from the night before so there was some of those going around the table as well. Here is a plate of the things I made: 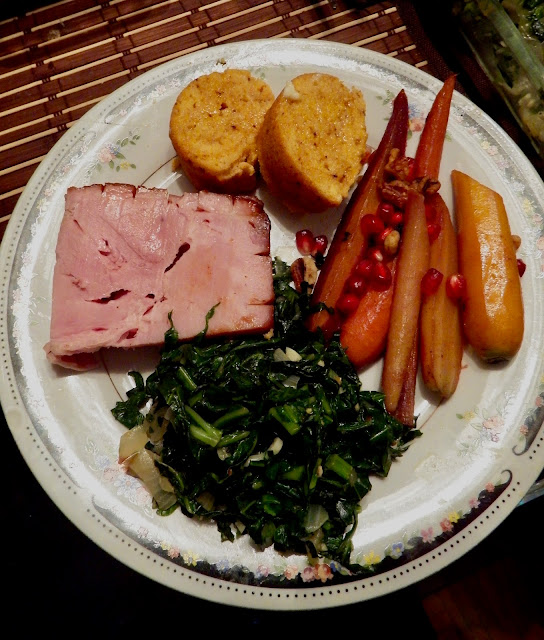 I really hope that you enjoyed the holidays with people you care about. This was a very special Christmas for me. Since I usually do Christmas and exchange gifts with my family who went to the UK this year, we are planning a smaller post-Christmas weekend in February so we can still do something together. It's crazy, it feels like I have a total of 3 Christmases this year, but hey, I'll take it! lol.

This is my last blog post of 2017! Wishing everybody a safe and prosperous new year. Here's to many more recipes and foodie experiences to share in 2018.

B
Posted by BramLlewellyn at 19:44